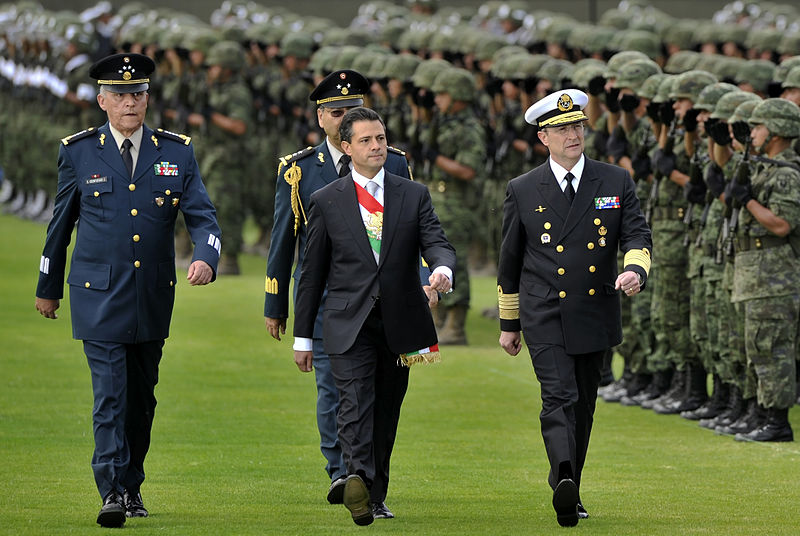 On 15 October, retired General Salvador Cienfuegos was arrested when he arrived with his family at the Los Angeles airport. The US authorities took him into custody under serious accusations of money laundering and drug trafficking. This was no ordinary arrest. Cienfuegos had served as head of the armed forces and Mexico’s Minister of Defence under Peña Nieto’s presidency in 2012-18. This incident unleashed a major diplomatic crisis between Mexico and the United States. The prestige of the Mexican army (and much else besides) was put at stake. On 20 November, the General Attorney of the United States withdrew the charges and repatriated Cienfuegos to Mexico. He has since remained scot-free.

Since 2015, the US Drug Enforcement Agency (DEA) had been closing in on Cienfuegos and amassing evidence of his close links to Mexican drug lords. The General, known in the criminal underworld as El Padrino (The Godfather), had been in cahoots with the powerful H-2 cartel. In exchange for hefty bribes, he is being accused of having helped this criminal organization launder money from heroin, methamphetamine, marihuana and cocaine trafficking. It is alleged that, under his command, the army had provided logistical assistance for the smuggling of drugs through Mexico and into the US. Cienfuegos had also used the army to combat the competitors of the H-2 cartel. This reveals the real nature of the so-called “war on drugs” launched by President Felipe Calderón with the connivance of US imperialism. The aim was not to stamp out the lucrative business of drug trafficking, but to fight some cartels in the interest of others. The Cienfuegos case is particularly incriminating for the army. Even the top brass of the military is personally involved in organised crime. Its crushing armed prowess is at the service of bloodthirsty gangsters. The arrest comes a few months after the imprisonment in the United States of another heavyweight in Mexican politics, García Luna, who served as Calderón’s Secretary of Public Security in 2006-12. He is accused of colluding with the Sinaloa drug cartel.

The bourgeois state is not a neutral institution safeguarding the interests of the nation. It is a weapon in the hands of the ruling class. Mexican capitalism is backward, parasitic, and dominated by US imperialism. It complements its “legal” earnings with an “illegal” income from corruption and drug trafficking. It condemns the Mexican masses to a life of misery, insecurity, and precariousness. The state apparatus reflects the moral bankruptcy of its bourgeois masters. Or rather, it distils it into its quintessence. It is the whip that must keep the working people in check. It is a thug in the payroll highest bidder. Not only did the Mexican military partake in drug trafficking under Cienfuegos. It also committed unspeakable crimes against the youth, the peasantry, and the working class. Most infamously, there is the question of the army’s participation in the massacre of 43 student activists from the Ayotzinapa rural teachers’ college. This was the most gruesome of an endless string of abuses.

The DEA compiled this information with total disregard for Mexican law. The institutions of US imperialism operate in Mexico with the arrogance of colonial masters. Local authorities chafe at this but ultimately comply with the whims of the imperialists, to whom Mexican capitalism is tied hand and foot. One might think, however, that the United States, with its putative concern for democracy, the rule of law, and efficiency and transparency, would at least help counterbalance corruption and organised crime. Yet this is a serious misapprehension.

The attitude of the United States in the Cienfuegos incident tears down all the lofty pretences about the rule of law and democracy peddled by Washington. The Trump administration released a major criminal against irrefutable evidence. The US lets this decorated henchman of the cartels free while it imprisons millions of working-class youths, especially Blacks and Latinos, for petty drug offenses. What motivated this decision? Certainly, Trump seeks to compromise Biden by passing on to the incoming administration all manner of foreign policy conundrums. This is one of them. In turn, the Mexican government exerted pressure on Trump for its own, complex reasons, which we will explain later on. At the same time, the upper echelons of the state have frictions with the DEA, whose autonomy they view with suspicion. However, these are all secondary factors. The key question is that the arrest of Cienfuegos compromises the Mexican state and the country’s entire capitalist regime. This also threatens the interests of US imperialism.

For years, Washington dished out material assistance and advice in Mexico’s so-called “war on drugs”. However, the arrests of Cienfuegos and García Luna reveal this support was provided to individuals and institutions that were in the pocket of organised crime. This needn’t involve conscious complicity with corruption on the part of US officials (although the “war on drugs” is full of examples of this). However, the farcical character of the “war on drugs” was unavoidable. The US imperialists need to keep Mexico under their jackboot. For this, they need to rely on the repressive power of the Mexican state, which must rise itself above society amidst the poverty and decomposition of a dependent country. To perform this social function, the state must function as a mercenary company. Collusion in the drug trade by Mexican authorities is the inevitable corollary of imperialist domination.

López Obrador and the army 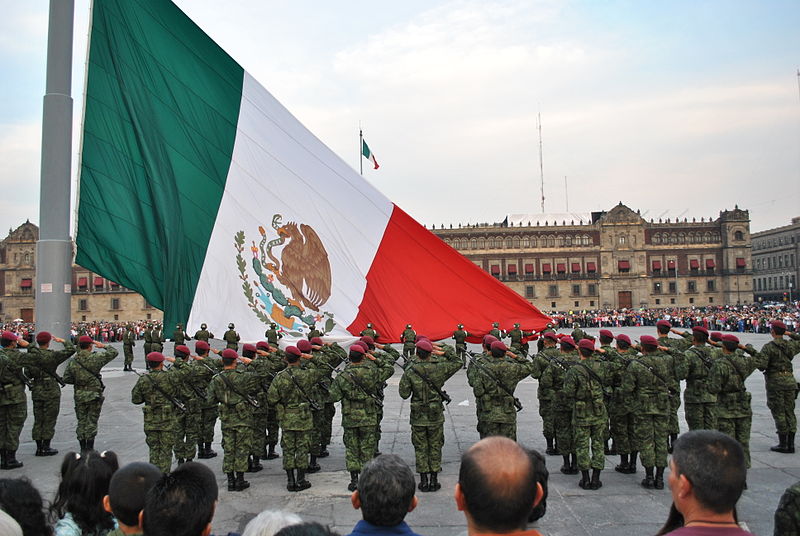 The nature of the military has not changed fundamentally under AMLO, and his attempts to curry favour with the top brass are a recipe for betrayal / Image: ProtoplasmaKid

The left-wing López Obrador administration exerted significant pressure to secure Cienfuegos’ repatriation. It appears they threatened to bar DEA officials from operating in the country. Although there has been some talk Cienfuegos might be tried for his crimes in Mexico, this is entirely unlikely. It is simply an excuse to save face before this shameful capitulation by the López Obrador administration to the corrupt army chiefs. Here, Secretary of Foreign Affairs Marcelo Ebrard takes especial blame, for he personally orchestrated the repatriation. The accusations levied against Cienfuegos fatally compromised the prestige of the Mexican generals. The idea of being tried in a gringo court represented an additional humiliation. The army's aura of incorruptibility is carefully cultivated by the entire superstructure of Mexican capitalism – to some effect, as the military is the most highly-ranked institution in opinion polls. This scandal, however, would also have affected other state institutions. Moreover, for the army top brass it was not a question of simple prestige and loyalty to their leader – they had more tangible concerns. Had the investigation gone ahead, it would have surely implicated other high-ranking army men. Consequently, the military demanded of López Obrador that he secure repatriation at any cost. He bowed down to this pressure.

López Obrador is a leftist nationalist whose promises for social transformation enthused millions of Mexicans. However, he is also a reformist who believes these changes can be carried out within the bounds of Mexican capitalism and through the lever of the bourgeois state apparatus. This is a finished recipe for betrayal. The Mexican bourgeoisie is weak and subservient to US capitalism. It cannot develop the productive forces significantly. Respect for its property means keeping the country in a state of poverty, backwardness, and dependence. The Mexican state is a corrupt instrument in the hands of this ruling class. It cannot be used to transform the lives of Mexicans or to conquer national sovereignty. On the contrary, the state (the army above all) is utilised by the Mexican ruling class to blackmail and cow López Obrador. He has attempted to secure the goodwill of the army through all sorts of concessions – including lucrative contracts for the construction of infrastructures, such as the new Mexico City airport. The armed forces are still deployed across the country and are involved in operations against organised crime. López Obrador reorganised the armed forces by creating a new National Guard, which he envisaged as his personal praetorian guard.

However, the nature of the military has not changed fundamentally. To seek peaceful coexistence with it means to shower the generals with resources and turn a blind eye to their violence and corruption – including their collaboration with the drug cartels and their human rights’ abuses. Indeed, López Obrador promised justice for the victims of Ayotzinapa, and, while he prosecuted important political actors from the Peña Nieto administration, he carefully skirts around the army chiefs involved in the massacre. This attitude is even more marked among other members of his administration. Foreign Secretary Marcelo Ebrard, the architect of Cienfuegos’ repatriation, belongs to the most opportunistic wing of the government. He has presidential ambitions and wants to curry favour with the generals.

Private property and the state apparatus are straightjackets for any progressive reforms. The only way to combat corruption, secure independence from imperialism, and improve the lives of the Mexican people is through revolutionary means, by attacking private property and mobilising the masses towards the creation of new organs of power, accountable not to the rich capitalists and drug lords and the imperialists but to the downtrodden working people.