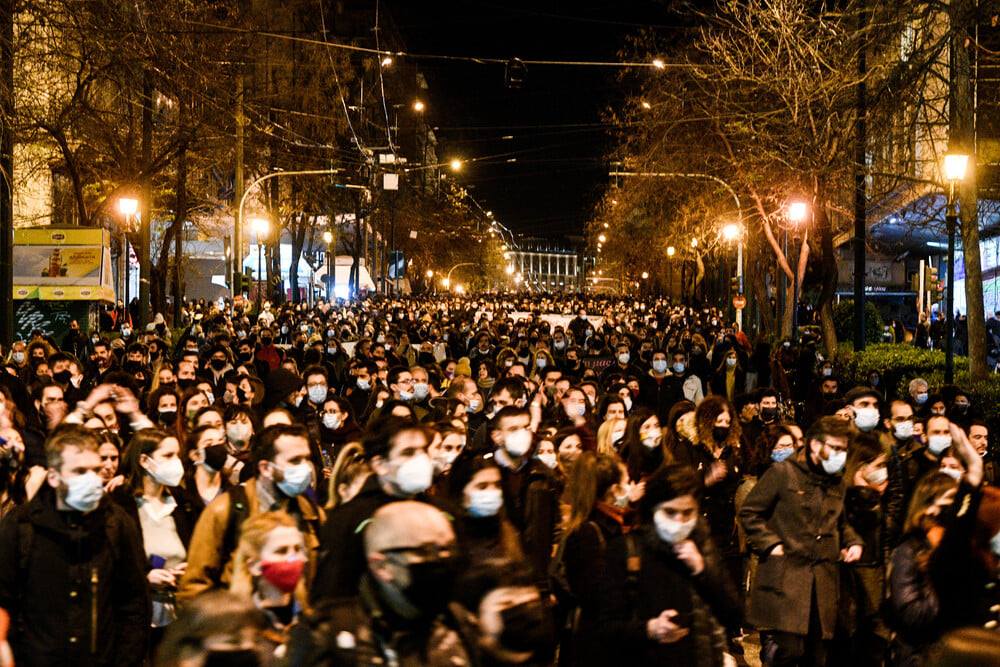 Mass protests involving thousands have broken out in Greece against the state persecution of a left-wing prisoner, who has gone on hunger strike to achieve basic rights. The mainly youth demonstrators have been met with vicious repression by the state. A united front of all left organisations is necessary to fight against the reactionary, authoritarian New Democracy government!

On 5-6 March, Greek police, in an unprovoked display of violence, intervened in demonstrations of solidarity with the hunger striker Dimitris Koufontinas. Koufontinas is a former leading member of Revolutionary Organisation 17 November (17N), which was active between 1975 and 2002 and used guerrilla tactics to oppose, among other things, the dominance of NATO and the USA in Greece. With the disbanding of 17N in 2002, many of its leaders were forced into barbaric and indeed unlawful prison conditions, against which Koufontinas has been on hunger strike for over 50 days.

For the first 16 years of the 11 prescribed life sentences received by Koufontinas for his involvement with 17N, he was detained in a unique, underground cell in a high-security prison in Athens, however in recent years was moved to a more rural prison, supposedly intended to allow more freedoms to well-behaved prisoners. In a recent u-turn, however, Greece’s ruling New Democratic Party announced a law in December, stating that ‘terrorists’ were no longer allowed to be held in rural prisons. Conveniently for these reactionary politicians, Koufontinas was the only condemned ‘terrorist’ to be in this situation, meaning that the new law served only to justify moving him back to a high-security prison and a cramped cell for 15 hours a day. In addition, the Greek government has consistently denied Koufontinas his legally required, periodic prison leave, which is having a catastrophic impact on the mental and physical health of the now 63-year-old.

It is against this cynical manipulation of the law by bourgeois politicians that Koufontinas began his hunger strike. In turn, the ND government has taken the decision to leave Koufontinas to die, depriving him of his legally guaranteed rights. In this way, they are trying to show their strength and demonstrate that they will be relentless in the face of any movement that turns against their criminal policies. As well as this, the government is also seeking to divert the attention of the masses away from their disgraceful management of the pandemic and to mobilise the most reactionary and backward layers of society in their support.

In response to the crimes of the government, a number of mass demonstrations have taken place, with thousands taking to the streets to show solidarity with Koufontinas and fight the reactionary policies of the ND government. Despite widespread misinformation and accusations of protester violence in the media, there is ample audiovisual material showing that police unnecessarily attacked protesters during recent demonstrations with the sole purpose of dispersing the rally. During demonstrations in Athens on 5-6 March, they did not allow protesters to march in blocks and chased the demonstrators while blasting them with water cannon, and throwing tear gas and flash grenades.

For a united front!

In this way, the masses have taken an important first step! The working people, led by the youth, after five years of relative inactivity – and despite the most difficult possible objective conditions – have shown their willingness to return en masse to the streets and in general, to the forefront of class and political struggles. Unjust and pervasive government violence have been met with a militant response. Now the masses must unite and continue to struggle, until the authoritarian government of capital is removed!

Our solidarity with Koufontinas is not just solidarity with a prisoner who is being denied his rights. It is, above all, solidarity with an anti-capitalist activist who is now being made an example of by the state and the bourgeois government. As Marxists, it is a given that we disagree politically with the ineffective and ultimately unhelpful methods of individual terrorism used by the 17N. As revolutionaries, opposed to the genuine mass terrorism of the bourgeois state, however, we stand in solidarity with any opponent of this system, even if we do not agree with the means of struggle he has chosen. The struggle that Koufontinas is waging today against the government and the bourgeois state is heroic and his demands must be supported by every activist of the labour movement and the youth.

Ultimately, what is required is a united front of all the mass political and trade union organisations of the working people and the youth, founded on the practical, militant mandate that the masses are currently putting forward. See here our suggestions for the necessary next steps (in Greek).

We need a revolutionary organisation, founded on ideas that can put a definitive end to police authoritarianism and the system it serves!