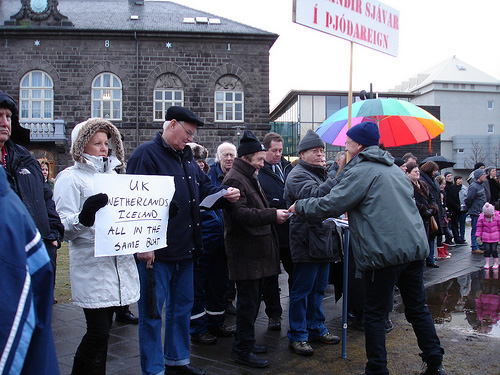 After the president's recent rejection of the IceSave deal between Iceland and the UK and the Netherlands, the country and its financial markets have been plunged into uncertainty. The draconian terms demanded by the deal has caused outrage in Iceland, forcing a referendum on the issue. The only decent thing for the government to do now would be to reject the deal and any attempt to force the people of Iceland to repay the debts of its financial speculators.

At the high point of the financial crisis in the autumn of 2008, the entire Icelandic banking system collapsed and with it its branches in other countries. The most spectacular of these collapses was that of IceSave, where the British and Dutch governments stepped in to cover the deposits that its Icelandic mother-company Landsbanki couldn't afford to cover. The British government then stepped in with anti-terror legislation to freeze the UK assets of the bank, further deepening the crisis in Iceland.

Landsbanki, in trouble because of its reliance on international credit markets, had opened up IceSave already in 2006 and was rolling out operations quickly on the basis of massive interest rates. Several local authorities in Britain deposited substantial amounts of money in the bank. The operation was very speculative and very high risk. This was at the time before the crisis, however, and no one bothered to look too closely at the state of the bank.

When the crisis came, Landsbanki was hit hard, in much the same way as Northern Rock in Britain, forcing it into administration in October 2008. In order to protect their domestic banking systems as well as their own citizens' deposits the British and Dutch governments put pressure on the Icelandic government to guarantee the deposits and proceeded to repay the bank's customers. The private debt of IceSave thus became public debt, transferred onto the balance sheet of British and Dutch national finances.

The question quickly arose, who is to pay for the deposits? British Prime Minister Gordon Brown and his Dutch counterpart Jan Peter Balkenende were not particularly keen on footing the bill for this bail-out and thus put pressure on the Icelandic government to pay up. In the meantime, the Icelandic coalition government collapsed and was replaced by a left coalition of the Social Democrats and the Left-Greens. A plan was put forward for bailing-out ailing Iceland, including loans from the IMF and the Scandinavian countries. This plan originally hinged on the signing of a deal with Britain and the Netherlands. In a classic imperialist bullying manner, the British were threatening to block any loans from the IMF unless the Icelandic government agreed to their terms.

The result? In August the Icelandic parliament approved a bill, promising to pay back some of the deposits. Then, after further negotiating, a deal was presented in October, which the parliament approved on 30 December. This legislation was then blocked by the President on 5 January.

The deal and its opponents

The debt that Iceland asked to pay is huge. It is £3.6 billion, that is 40-60% of Iceland’s GDP or £11,700 for every Icelander. Not only is it quite outrageous to ask the Icelanders to pay up for the debts accumulated by a few speculators, the 5.5% interest rate demanded makes the position even worse. The editorial of City AM, the free newspaper given out in the banking districts of London, puts it this way: “Imagine if UK taxpayers were asked to pay £700bn to overseas governments because one of our banks had messed up. We too would be up in arms.” (Iceland sees the first anti-bailout revolt, 6 January, 2010) The Financial Times editorial similarly argued against the deal under the headline “Do not put Iceland in a debtors' prison” (6 January, 2010).

Martin Wolf in Financial Times argues the following on 15 January:

“Threatening such a country [Iceland] with destruction, as Lord Myners [the UK's City minister] has done, is simply shameful. The UK and the Netherlands should stop their self-righteous bullying at once. […] Taxpayers cannot be expected to write open-ended insurance on the foreign activities of their banks. It is bad enough to do so at home.”

It is clear that the British government, finding it difficult to motivate its own massive bailouts, is trying to shift some of the burden of repayment to Iceland. It is also attempting to place the blame on the Icelanders – not on its own failed pro-Capitalist policies. It's response to any proposal of renegotiation is thus predictably uncompromising, but even among the ruling class there are those more far sighted who see the problems that this will cause in the future. The legal basis for forcing Iceland to pay back these deposits is also very shaky, which is probably also a reason why the British and Dutch governments are so keen to settle out of court. 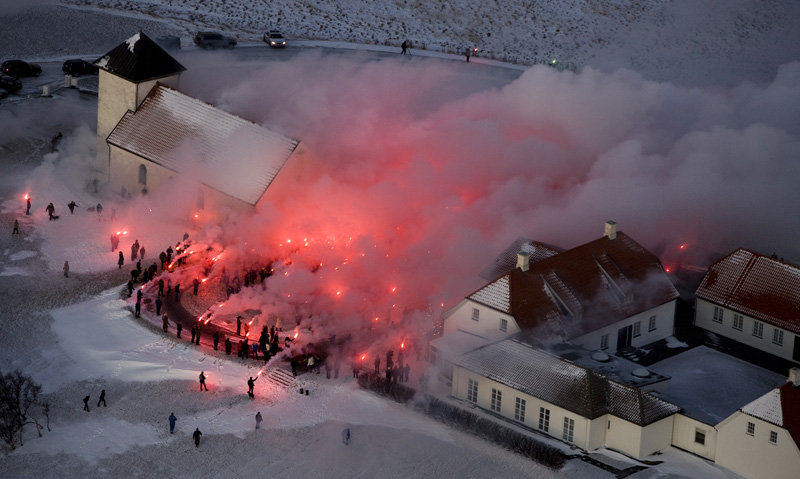 Protesters opposing the IceSave deal. Photo by Ragnar Axelsson. In Iceland the IceSave saga has caused a new round of domestic turmoil, as hundreds of protesters once again took to the streets opposing the plans. The Independence Party and the Progressive Party opportunistically jumped on the bandwagon, led by the disgraced former Prime Minister and former head of Central Bank, David Oddson, who has argued for renegotiation in the editorials of Conservative Morgunbladid. The Independence Party, ousted as they were about a year ago from the right-wing's decades long domination of Icelandic politics, are keen to get back in the saddle using cheap shots against the left.

The refusal of the President was not simply some kind of right-wing plot against the left, however. The majority of the voters in Iceland oppose the deal, a recent opinion poll showed. The petition that was given to the President, urging him not to sign the law, was signed by a quarter of the population. Also, the Left-Green Party MP Oggmundur Jonasson resigned from the government in October in protest against the treaty. Jonasson has since been an active campaigner against the treaty, urging the President not to sign it. The movement is also linked to the widespread movement refusing to pay mortgages in foreign currency.

The workers of Iceland forced to pay for crisis

When the Icelandic government took on the debts of the Icelandic banks, it increased the national debt many times over. With the IceSave deposits, it stands at roughly twice GDP (200%, compared to Britain's 59% or Ireland's 73%) and is growing by about 15% of GDP every year. The IMF have granted a window of relief to the government to try to sort out its fiscal balance, i.e. the state budget deficit. The government, in a letter of intent to the IMF, stated that the deficit is to be brought down to 10.9% of GDP in 2010. This is to be continued in 2011 and 2012, leading to a surplus in 2013. The IceSave debt only adds a further burden to Iceland's already desperate situation.

How is this fiscal balancing to be achieved? The government of Iceland explains:

“Revenue measures aim to raise the central government primary revenue ratio to at least 32 percent of GDP by 2013, and to achieve a fair distribution of the increased tax burden. They include a revision of the individual and corporate income tax systems, higher consumption taxes, measures to adequately finance unemployment benefits, environmental taxes, and a repeal of certain tax expenditures. ” (Iceland: Letter of Intent, Memorandum of Economic and Financial Policies, and Technical Memorandum of Understanding, 20 October, 2009)

This means increases in VAT and energy tax, self-financing of unemployment benefit, as well as rises in corporation and income tax. Most of the measures outlined here, in particular taxes on consumption, are measures that disproportionally affect workers with lower incomes.

In terms of expenditure, this is what the government has to say:

“Expenditure measures aim to reduce the central government primary spending ratio to about 25 percent of GDP by 2013. They focus on further cuts in operational spending; tighter means testing for social benefits; and significant scaling back of investment spending, which had escalated in recent years. Socially important sectors are to be protected, along with labour intensive investment and maintenance. ” (Letter of intent...)

Other than the obvious scaling back of investment and the diffuse “operational spending”, the attack on benefits, tightening the means testing and so on, mean further attacks on the working class. There is no doubt about who is to bear the burden of the crisis.

It is necessary to say clearly that such a policy from the current government will cause the left and the workers' parties to lose support. The workers of Iceland didn't vote for more years of cuts, bail-outs and attacks on their living standards when they cast their votes for the left in the election last year. The coalition needs to change course if it is not to be discredited in the eyes of the people of Iceland.

In Iceland, as in the rest of the world, the weak boom of the last ten years meant a rise in inequality and minimal improvements for ordinary people. Now that the crisis is here, the people who benefited the least from the boom are being asked to pay the price for the speculative activity of those that gained the most. The people of Iceland are naturally outraged by this.

The bourgeoisie across the world attempt to split the workers, diverting attention from the real problems with an argument about who is to pay for the bail-outs – in reality which working class is to pay for the bail-out. It is of course not the fault of working class Icelanders that their government's buddies in the financial sector went on a speculative binge – any more than it is the fault of working class people in Britain. The problem is the Capitalist system with its periodic crises.

The Left-Green movement and the Social Democrats must abandon their current policies of defending the status quo. A radical change in policy is necessary and this must be combined with an abandonment of the commitment to the draconian IceSave deal. The reaction of the British and Dutch governments must be countered with an appeal to the labour movement in those countries. Already in Britain, 7 Labour Party MPs have signed an Early Day Motion arguing for a renegotiation. The Labour Representation Committee, a group on the left of the Labour Party, has similarly issued a statement in solidarity with the people of Iceland.

On a capitalist basis the only way the present huge financial balance can be put right is by making the workers’ pay. That is what the proposed changes to welfare mean. But the workers cannot afford these measures. Accepting them would mean a life of hell, a life of dire poverty. A government that claims to be of the left should not accept such policies. The only real answer is repudiation of the country’s foreign debt, combined with nationalisation of the major industries and a socialist plan of reconstruction, including investments in geothermal energy and the extraction of raw materials. Only through a national plan of production can the people of Iceland not only move out of the crisis but also ensure that they will not fall into the same trap again.

The financial crisis that has hit Iceland is part of the global crisis. A radical move on the part of the Icelandic labour movement would be seen with sympathy by workers in other countries who are facing similar so-called “solutions”. On that basis a move towards socialist planning in Iceland would have to be seen as the beginning of a European and worldwide movement for socialism.