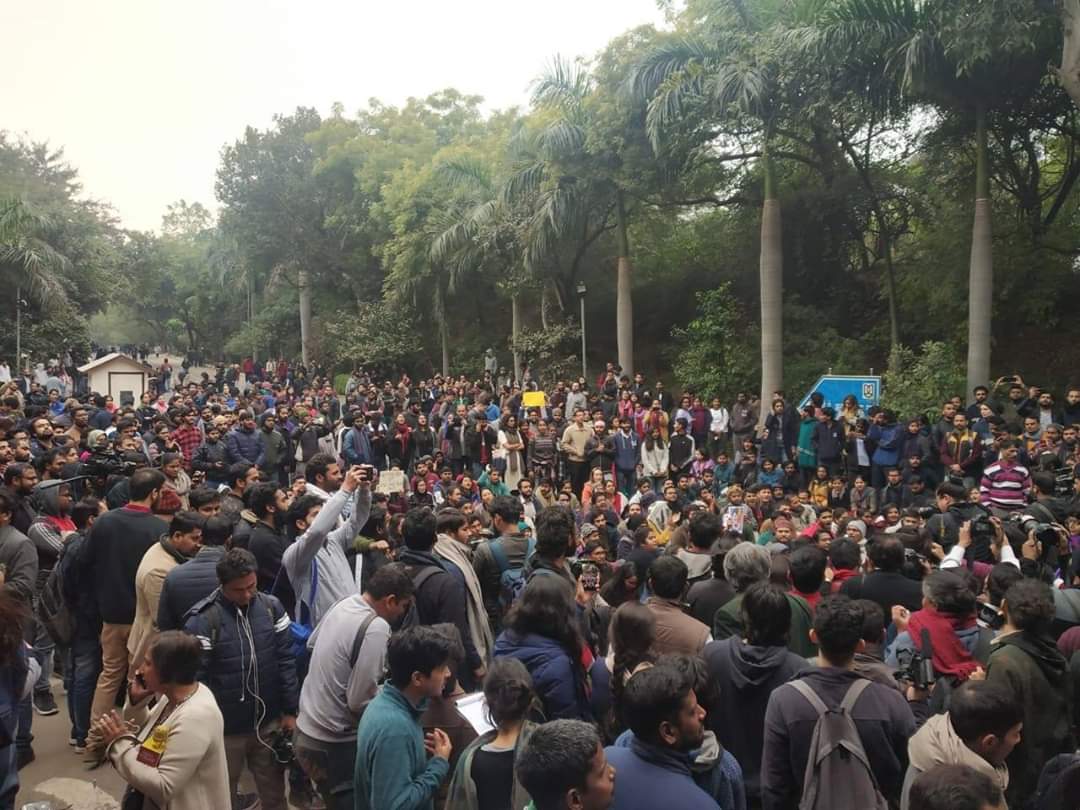 The Modi government has unleashed a brutal attack on the student leaders of the Jawaharlal Nehru University in Delhi through its goons, allegedly linked to ABVP and RSS. The thugs of the ABVP, student wing of BJP, assembled in large numbers along with security personnel in civilian clothes, and entered the premises of the university on the evening of 5 January. They severely beat and injured many student leaders, including the president of the student’s union, Aishe Ghosh. She has now been admitted to hospital and is in critical condition with a fractured skull.

Many other students locked themselves in their rooms as the goons roamed around the campus in large numbers and beat up any student confronting them. This is yet another attack by the Modi government on students in Delhi after the brutal attack of 15 December on the students of Jamia Millia Islamia, another important university.

These students are organising protests against proposed fee hikes, as well as the new citizenship law that will strip millions of people across the country of their citizenship, deeming them illegal. The BJP government has tried to crush this movement with brutal measures, which has seen students beaten up by the police inside their university, library and hostels on 15 December. Many were arrested on false charges. Since then, the movement has spread to every nook and cranny of the country and millions of people have come out against the anti-people policies of the government. Police have also fired live rounds at many protests, resulting in at least 28 deaths so far and many injuries. Hundreds of people have been arrested and beaten up by the police while in custody.

This latest attack on the student and staff leaders of JNU is another draconian measure by Modi to suppress this movement, using these goons to terrify the students and weaken the mass movement. The students have simply been carrying out peaceful protests in the world’s so-called “largest democracy”, but clearly the ruling class has no understanding of the word.

A common student was brutally beaten up by Delhi police for questioning an illegal entry of a car at Jnu North Gate! #JNUProtests #ABVP_TERRORISTS pic.twitter.com/N1oXVFHWD2

This is not a simple matter of ‘law and order’: the government has sanctioned its thugs as well as the police to beat up innocent, peaceful protestors. So far 15 students have been admitted into hospital and the goons continue to patrol the university premises. Meanwhile, aid and doctors are being prevented from entering and helping the students. These methods will only expose the tyranny of the Modi regime and will strengthen the resolve of the students of JNU and of the whole country to come out against this tyranny and brutality.

The International Marxist Tendency openly condemns this brutality and demands the immediate arrest of all the goons and security officials who have perpetrated and organised this heinous crime on the students of JNU. We also support the demand for the resignation of Home Minister Amit Shah, who is behind all these crimes against the students of Delhi and the entire country. We also urge immediate withdrawal of the new citizenship law, which has seen mass rejection across India through huge protests and demonstrations.

We also send a message of complete solidarity to the students of JNU who are fighting against the injustices of the Modi regime and against the recent measures to increase student fees.

Long live the struggle of JNU students against the oppressive Modi regime!

Down with the oppression and brutality of the Delhi Police!

Long live the unity of the working class!