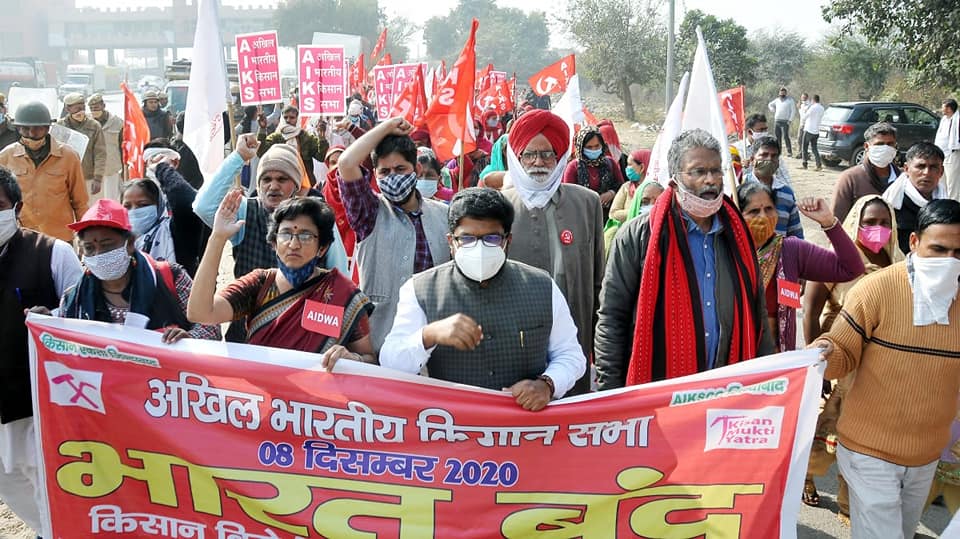 Farmers in India observed a national lockdown on 8 December – also called a Bharat Bandh – a day ahead of the scheduled sixth round of talks with the government, with five million taking part across 20,000 locations. Farmers blocked major roads from 11am to 3pm, predominantly in the agricultural states of Punjab, Haryana and Uttar Pradesh. All commercial centres were closed. Protestors blocked railway tracks in West Bengal, Bihar and Odisha. Many shops and commercial areas were also closed in Delhi in solidarity with the striking farmers. Despite a massive blockade of Delhi’s main highways, farmers are still receiving solidarity from the people living there.

In Jharkhand state, shops and private businesses were closed, and there were demonstrations and rallies in Ranchi, Jamshedpur, Hazaribagh and other major towns. Almost all major Delhi entry highways were blocked by farmers. About 100 people were arrested in Gurgaon in Haryana state, along with an MP from the regional opposition party Telangana Rashtra Samithi (TRS). Activists from Congress, the Aam Aadmi Party (AAP: the ruling party in Delhi), the All India Kisan Sabha (AIKS: the All India Peasants Union), the Centre of Indian Trade Unions (CITU) and workers from Anganwadis (rural child care centres), in all representing 360 villages, protested in Gurugram and blocked national highways. Congress workers were arrested in Chandigarh city when they tried to block the national highway. Farmers in Jammu also observed the strike, with several shops and business establishments being closed down. A major rally was held by transport workers and their organisations, who also blocked the Jammu-Pathankot highway.

Farmer leaders in Maharashtra state also observed the national lockdown with business closures. The agriculture market in Mumbai was completely closed, and hundreds of thousands of people were on the streets showing solidarity with the striking farmers. Overall, the media and the farmers claimed that the Bharat Bandh was very successful across 25 states. Almost all major media outlets concluded that this national lockdown was much larger than the events of 1988, when farmers mobilised in huge numbers at Boat Club Delhi, protesting crop prices and for the waiving of utility bills.

There are around 35 farmer organisations currently present in Delhi, which is the epicentre of the farmers movement. Farmers are demanding the state provide them Ramlila ground: an open field to encamp for their protest within 6km of parliament house. Currently, farmers are camping over 30kms away, along major highways entering Delhi.

Rejection of dialogue and negotiations 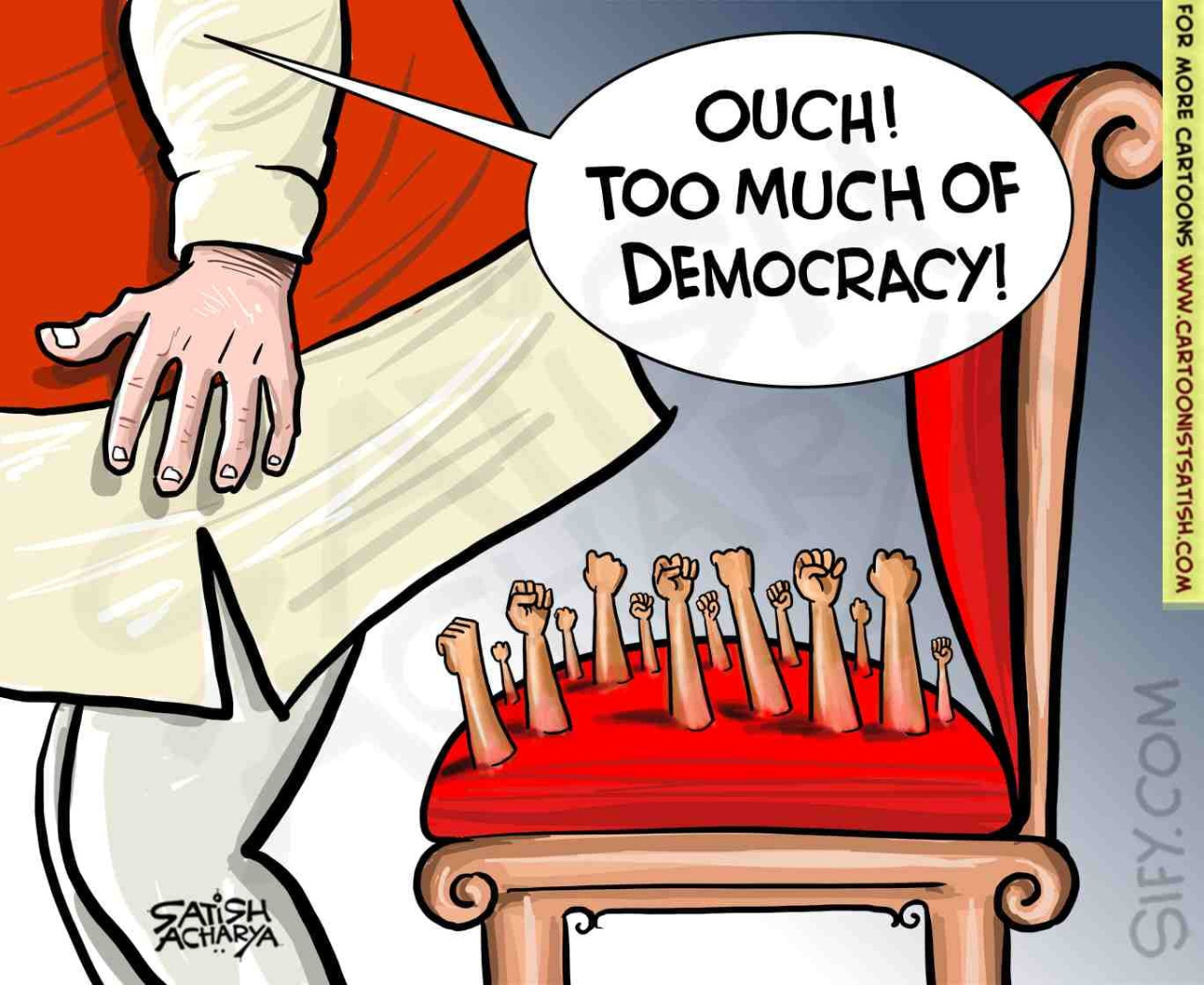 The farmers have rejected all offers of concessions from the government, and said that they would not accept anything other than scrapping the three new farm bills / Image: Satish Acharya

Leaders of 13 organisations behind this day of action held talks with Amit Shah, the Home (Interior) Minister, a day prior to the national lockdown, but failed to arrive at any resolution. Prime Minister Narendra Modi and Shah are adamant about implementing the hated agricultural bills that kicked off this movement. However, they opened the door for negotiations and tiny adjustments to the bills. They responded to farmers’ concerns with proposed adjustments to the bill, such as registration of private companies with the state government, the same level of taxes for transactions taking place outside the Agricultural Produce Market Committee (APMC) system, which guarantees a minimum support price to farmers; and that farmers can take disputes against companies to civil courts if needed. Furthermore, the government said that they will provide written guarantees on Minimum Support Prices (MSPs) for all public and private transactions, but cannot make a law on this. They decided to withdraw the Electricity (Amendment) Bill 2020, which aimed to reduce subsidies and push for the privatisation of power provision.

The farmers rejected all these offers and said that they would not accept anything other than scrapping the three new farm bills. They rejected the sixth round of talks and said that there would be no further negotiations with the government unless the three laws are repealed. Farmers decided to escalate the lockdown by announcing two days of action on 12 and 14 December. On the former, farmer organisations have decided they will jam major highways, occupy toll road plazas, and make all highways toll free. Furthermore, they will stage sit-ins outside government buildings and ministers’ offices. On 14 December, farmers will stage protests all around the country and occupy all business offices and centres linked to conglomerates owned by Mukesh Ambani and Gautam Adani (India's biggest capitalists).

Then BJP is using all the media channels at its disposal and stepping up propaganda on the benefits of farm bills for ordinary farmers. They are spreading hatred against farmers and branding their actions as going against India's economic security. Several ministers, such as Haryana Agricultural minister JP Dalal, say that farmer protests are being fuelled by Pakistan and China. The same position is being projected on the mainstream and social media controlled by the Modi government. In several places, including Jaipur, the BJP unleashed their goons to physically attack protestors from opposition parties. In other places, this work is carried out by the police under direct orders from the centre.

The government and its lapdog media channels are accusing opposition parties of playing into the hands of foreign powers who want to destroy India. Meanwhile, the opposition parties are embracing this BJP narrative and trying to prove that they are the real defenders of Indian democracy. Their objections are simply that the bills were passed in a highly undemocratic manner in the parliament, and that a proper democratic process needs to be adopted for this. Interestingly, this demand is coming from parties who have an insignificant presence in parliament.

To appease their rank-and-file members, 15 opposition parties are supporting the farmers’ nationwide strikes. Several parties staged a symbolic sit-in throughout various states under their influence. The All India Trinamool Congress (TMC) began a three-day limited sit-in of their agricultural workers’ wing in West Bengal. However, TMC leader Mamta Benerjee said that she would not support the Bharat Bandh called by the farmers. In Assam, Congress and AIUDF opportunistically extended their full support to the farmers’ lockdown. Dravida Munnetra Kazhagam (Dravidian Progressive Federation, DMK) and its allies in Tamil Nadu also offered their support. In Telangana, Chief Minister of the TRS called upon his party members to support farmers through rallies. Despite this superficial support, in general, major opposition parties are hesitant to get directly involved with the farmers’ strikes and are keeping their members away.

Stalinist stalwart Sitaram Yechury of the Communist Party of India (Marxist) (CPIM) said that he wants to stay away from the farmers' protest sites, and that no party members will join farmers in their protests except a few members of parliament in a very limited intervention. “We do not want to politicise the farmer issue", said 'comrade' Yechury.

Stalinist parties have joined the right-wing opposition parties, including Congress, the Nationalist Congress Party (NCP), APP, DMK and TRS in supporting farmers, through a meeting with President Ram Nath Kovind on 9 December, conveying a joint letter of protest. The opposition team, including the Stalinists, is led by Sharad Pawar from the NCP. Pawar was India's longest-reigning Agriculture Minister during the Congress party-led UPA coalition rule from 2004-2014. During his period, Pawar actively campaigned for corporatising the nation's agriculture sector. He wrote to various chief ministers of Delhi asking them to amend their state APMC laws to favour private players, particularly large corporations. His hypocrisy has been exposed in the media as the government leaked his letters. 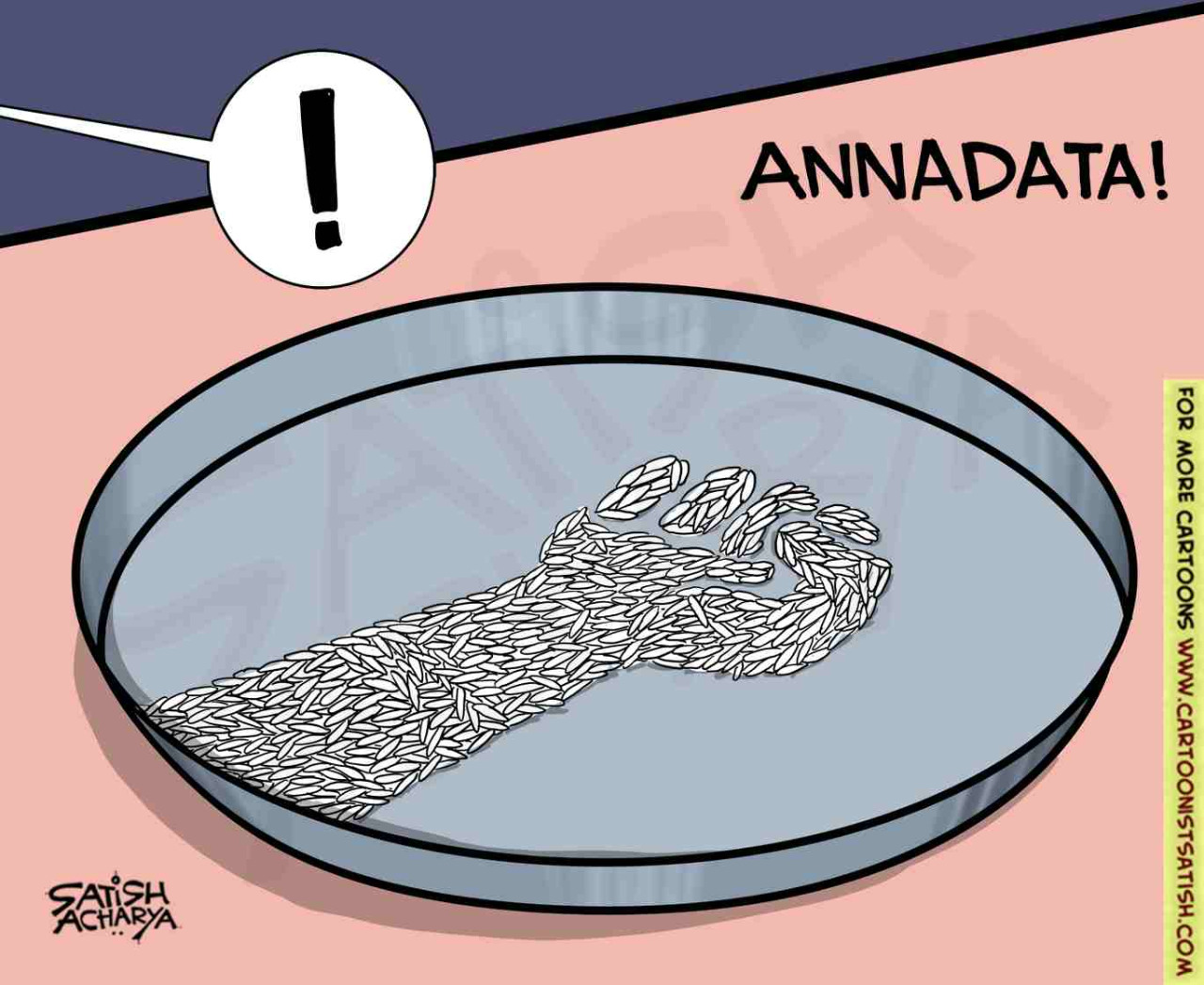 Farmers are gathering support from various workers’ organisations and unions. Bank union workers showed solidarity by wearing black badges. Other sectors that are supporting the farmers’ protests include fishermen, sand mine and quarry workers, industrial federations, railway federations and students. However, these supporters are limited to individual participation in protests.

International solidarity is also pouring in from workers around the world. Protests and rallies are happening in the USA, Canada, and the UK, where there are substantial Indian diasporas. The ruling classes in the west are fearful that these protests could potentially inspire workers in their own countries to action. Therefore, media exposure for these international protests has been quite limited. Canadian Prime Minister Justin Trudeau was pressured by the Indian diaspora to urge Modi’s government to allow peaceful protests and engage in dialogue with the farmers. Punjabi Indians are the largest diaspora in Canada and often constitute a huge vote bloc in several Canadian constituencies. Ultimately, Trudeau and the rest of the western ruling classes fundamentally represent the same capitalist interests as the multinational corporations and Modi government, and thus oppose the farmers’ struggle.

Accumulation of wealth and misery

Modi's right-wing government is adamant about supporting large corporations. While in opposition, the BJP built its social base in farming regions through agriculture middle-men known as Arthis, and small and medium businessmen. However, when they came to power, their focus shifted to large businessmen. This is the law of capitalism. Large corporations eat smaller companies and establish themselves as a monopoly. Modi has over the years consolidated considerable power in the centre through various acts of legislation, and by directly intervening in state affairs, particularly where opposition parties are dominant, thereby reducing their overall economic and political influence. All mainstream parties adhere to capitalism and have abandoned anything resembling a pro-people stance. Following continuous betrayals, local state parties were totally rejected by the masses in the last elections, reducing their powers significantly in the centre and states. The BJP's anti-establishment rhetoric, combined with religious jingoism, managed to fill the political vacuum left by other political parties. Now, the continuous fight between the ruling BJP and other parties is over their share of plunder of the surplus-value created through the exploitation of the working class and poor. Of course, the largest combatant always dominates the fight.

BJP leaders have developed a one-stop-shop for corruption and looting the financial and agricultural resources of India. This will bring immense wealth to the top BJP leaders and state bureaucrats, eventually trickling down to their lowest denominations. The stage is set for massive accumulation of wealth and political power by the BJP leaders and their capitalist backers. But as Marx once said: “Accumulation of wealth at one pole is, therefore, at the same time accumulation of misery, agony of toil, slavery, ignorance, brutality, mental degradation, at the opposite pole...” Hence, we see in India that a massive accumulation of wealth and power is happening at the same time as a huge rise in poverty, disease, unemployment, oppression and exploitation. Hopeless, corrupt and careerist mainstream political leaders cannot set things right, and the so-called left parties have completely abandoned any semblance of class struggle and embraced petty-bourgeois liberalism.

The farmers’ movement is a ray of hope in the suffocated Indian political landscape. We welcome the upcoming days of action announced by the farmers’ leaders for 12 and 14 December. These will have a significant impact, as long as they can gather the mass support of workers and wider society. With every passing hour, the BJP and state media are spreading hatred against farmers, trying to poison the mass consciousness. They are branding them anti-patriotic agents, funded by the Pakistani and Chinese states; Khalistan nationalists; infiltrated by Muslim jihadists, etc. Furthermore, unless the movement pushes forward towards smashing the state and the entire capitalist system, it will lose people's support, inviting state aggression in the most brutal form. Farmers and their organisations have to actively reach out to major workers’ organisations and their rank-and-file members, making efforts to organise an indefinite general strike until their demands are met.