Share
Tweet
A wave of protests and strikes has swept the capital of Pakistan-held Kashmir, Muzafferabad. As we reported yesterday, several comrades were arrested yesterday at a demonstration. The response of the people of Kashmir was immediate and decisive - demonstrations were held and roadblocks were erected. In the end our comrades were released. 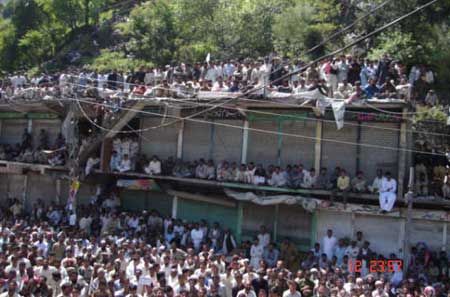 As the snow begins to melt in the Himalayas, a wave of mass protests is sweeping Muzafferabad, the devastated capital of Pakistan-held Kashmir against the failure of the Musharraf regime and Earthquake Rehabilitation Agency (ERA). At least 40,000 people protested on April 13 in the various towns and cities in the area of the capital. These protests were organised by the United People’s Front (UPF) and initiated by the Marxists of Kashmir.

As we reported previously the situation in the devastated areas of Kashmir is worsening with each passing day due to the behaviour of the state authorities, who have humiliated the people, and the lack of funds provided by the regime for the reconstruction of homes. A storm of anger and resentment was gathering among the masses which eventually erupted on April 13.

A widespread feeling of anger and discontent has existed since the calamity on October 8. This seething anger occasionally burst into the open over the last period, but it was on March 31 that this new wave of class struggle began with the first protest which was held in Garhi Dopatta, Muzaferabad, where more than 1500 people participated. The people were angered by the ERA. In the second phase of the distribution of reconstruction funds an average of Rs 25,000 ($416) was given to each family for the reconstruction of their homes. This was an insult to the victims of the earthquake because the average cost of constructing a home to accommodate as many as two or three families (because the joint-family system still dominates in this remote area) is approximately $8000. 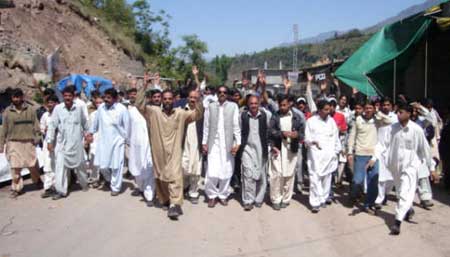 The anger of the masses had reached its limits. After the protest of March 31, which was organised by the Jammu Kashmir Revolutionary Youth Alliance (JKRYA), a united front of youth organisations formed by the Marxists of Kashmir, a mass meeting was held on April 1 in which the Marxists of Kashmir united the representatives of all the devastated villages and towns to form a new front – the United People’s Front. This new front was formed with the overwhelming participation of the masses. A key role was played by Comrade Shujat Kazmi, the former president of the Jammu Kashmir National Students’ Federation (JKNSF), who was unanimously elected the coordinator of the newly formed front.

On April 3, in response to the call of the UPF, a complete “shutter down” (the closing of all shops and workplaces) and strike was organised in Garhi Dopatta in which more than 2,000 people participated. On April 7, a protest was held when the Chief Secretary of Kashmir, Kashif Murtaza, and the Chairman of ERA, General Saleem Altaf, visited the area. Three hundred people took part in this demonstration and chanted slogans against the ERA and the Musharraf regime and called for a district level protest on April 13. 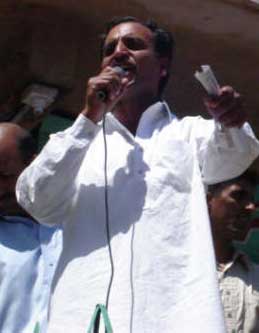 After the formation of the UPF the newly elected coordinator, comrade Shujat Kazmi, and the district coordinating body visited all the main towns and villages around the devastated capital in order to expand and strengthen the front. They published and distributed four leaflets in one week. On April 13 an unbelievable mass demonstration took place - unbelievable because not one of the traditional parties or mass organisations were involved. In fact, not even a single leader of these mass political parties was involved. It was only the young Marxists of Kashmir, with their very small forces but tireless efforts, that made this protest successful. More than 10 small villages and 12 big towns in the area of the capital participated in the general strike of the district.

Even the conservative bourgeois media, despite their previous criminal blackout of news from the area, was forced to report that more than 40,000 people had protested against the policies of the ERA and demanded that it be dissolved and that the reconstruction work be handed over to the people’s committees at the town and village level.

The main towns where the strike was observed were Neelum Valley Pateekha, with 4000 participating, Garhi with 1000, in Devlian, 600, Hatiyan Bala, 3000, in Chanari, 3500, in Chagothi, 1000, in Muzferabad city, 1000, in Chakar, 2500, in Rashian, Qulikot and Panjkot, 1500 and Garhi Dopatta where more than 12,000 people participated in strike action and demonstrations. Major strike action took place in these towns along with several other small villages where hundreds of people also participated.

The biggest demonstration, which was held in Garhi Dopatta, was led by the coordinator of the UPF, comrade Shujat Kazmi, and the convenor of the JKRYA, comrade Adil Khan. In Garhi Dopatta a complete “shutter down” of the city and a general strike was observed for more than four hours. Life in the Jehlum Valley was at a standstill until the end of strike.

The workers, youth, and common people were filled with such revolutionary fervour that they took the control of the whole valley into their own hands and did not allow anything to move without their permission. Even a Pakistani Army convoy was stopped for four hours and was not permitted to move. The participants of the strike were chanting slogans such as, “Every one demands food, clothing and shelter!”, “No religious wars, no national wars - class war, class war!”, “One wish, one solution - class war, class war!”, “Down with capitalism, down with the ruling class!”.

There was a similar situation in Hatianbala, Chinari, Chakar and Pateeka. These cities were completely shut down and the roads blocked. Everywhere in Muzafferabad the masses poured into the streets and paralysed the capital city. But the situation in Garhi Dopatta went beyond the limits of a normal strike. In fact it was a near insurrectionary situation. Some of those who participated in the strike later commented that if the Jehlum Valley were a separate state, then on April 13 there would have been a revolution. Comrade Shujat, comrade Adil and the other speakers, while addressing the mass rally in Garhi Dopatta called for an end to the ERA and demanded an end to the payment of utility bills in the devastated areas. They also called for free education and health care and for the cancellation of all the debts of the workers in the public sector. The speakers also called a national general strike for April 22. This general strike will be in support of a charter of 30 demands related to the reconstruction efforts.

On April 14 comrades Shujat Kazmi and Adil held a press conference and announced that May 1 was the deadline for the acceptance of all their demands and also made an appeal to the workers and youth of the world to stand with them in solidarity in this struggle.

On April 17 another rally was held in Muzafferabad in which more than 500 people, mainly students and youth, participated. This rally began to march toward the Assembly Hall where a clash with the armed forces of the state took place and the participants of rally were brutally baton charged. 11 people, including the leadership of the JKRYA, were arrested, including Rashid Shah, the coordinator of the UPF in the Jehlum Valley.

The state’s attack has completely exposed on the one hand its fear of the mass movement and on the other hand its intention to crush it using the brutal methods of state repression. The Pakistani state has proven itself incapable of solving the problems the masses face in the devastated areas. This failure of the state compelled the masses to take the road of struggle using the methods of mass action and the state is now preparing to crush the movement with its own traditional methods of state repression, arrests and torture.

The arrest of the leadership of the JKRYA is a clear example of this. Comrade Shujat Kazmi was also present on the rally but managed to escape the clutches of the state. The Marxists of Kashmir are not only the organisers and leaders of this movement. The revolutionary work of the Kashmiri Marxists, along with correct perspectives combined with correct tactics and methods has proved to the masses of Kashmir that only a leadership based on the scientific ideas of Marxism can offer a way out of the hell that is capitalism.

Unfortunately, we have only been able to report in detail on the situation in Muzafferabad. But in the two districts of Bagh and Rawlakot the discontent of the masses is simmering and about to explode. The situation is in fact already beginning to erupt in Bagh where a wave of protest is spreading rapidly. In Rawlakot, a protest movement is also beginning.

On April 13 more than 600 people protested in solidarity with the people of Muzafferabad. It has now been decided to organise a general strike not only in the devastated areas but also in the other districts of Kashmir. The general strike on April 22 will mark a decisive stage of this struggle. But the masses of Kashmir need the solidarity and support of the proletariat of the world. We appeal to the youth and student organisations and trade unions of the world to send urgent messages of solidarity and support.

You can send a protest message to the President of Pakistan by going to this site:

You can also find your local Pakistani embassy, if you wish to write to them, at:

And of course solidarity messages can be sent to:

We have received the good news that the authorities in Muzafferabad have released the comrades. Upon hearing of the arrests there was an immediate response of the masses, particularly the youth, in Muzafferabad and the Jehlum Valley who held demonstrations and erected roadblocks. Some 2,000 people protested against the arrests. There was also an immediate and good response from our international comrades, supporters, and sympathisers. We would like to express our greatest thanks to all those who sent messages on such short notice.

We now ask that all comrades send messages of protest to the authorities in Pakistan and Kashmir demanding the fulfillment of the demands of the earthquake victims.

Again, messages can be sent to the addresses provided above.