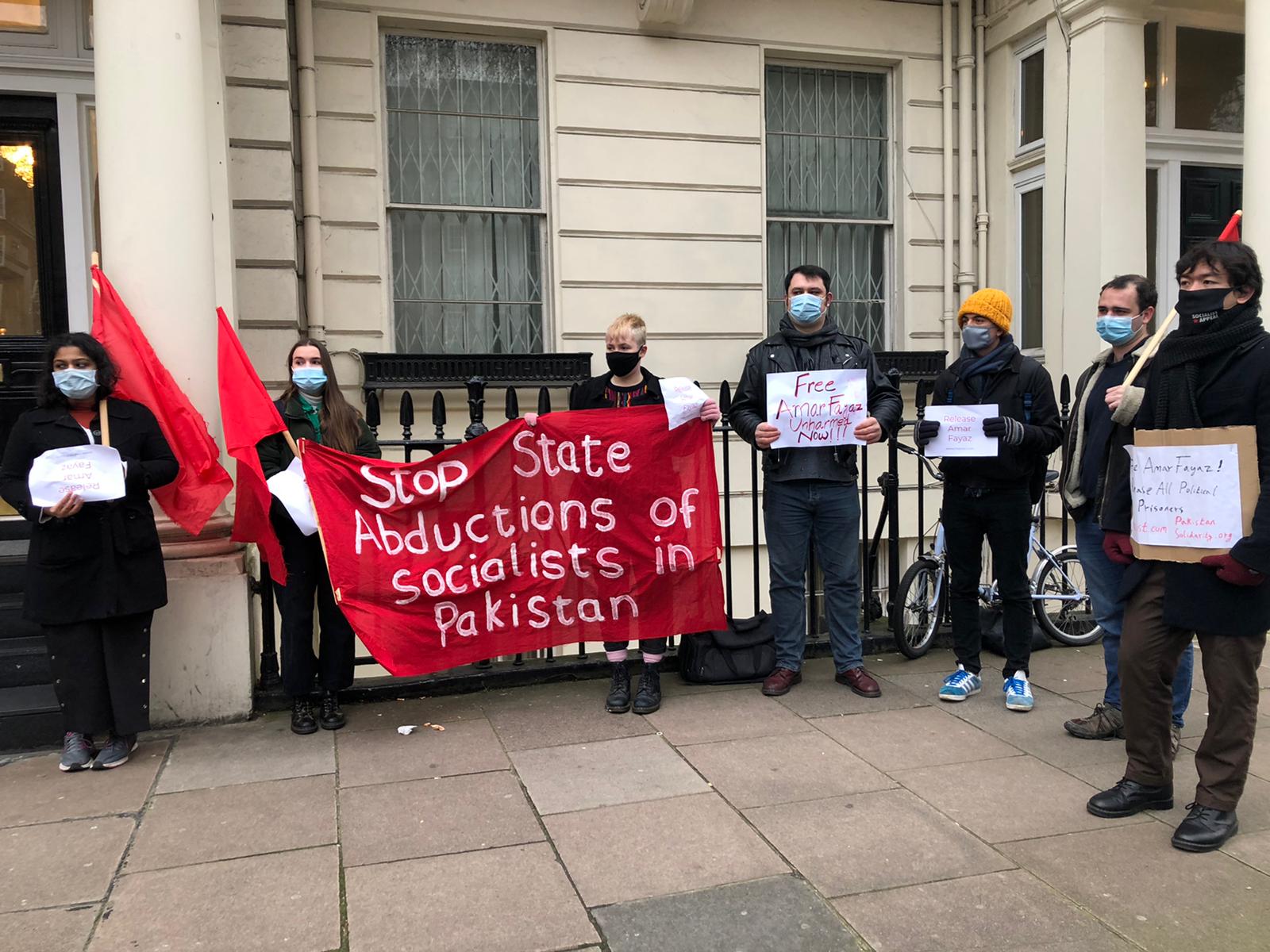 Comrade Amar Fayaz was abducted on 8 November 2020 by state authorities in Jamshoro, Pakistan, a month ago, and his whereabouts are still unknown. Comrades all around the world are showing solidarity and putting pressure on the Pakistani state, demanding Amar’s release. An online petition has gathered more than 6,000 signatures from comrades and supporters globally.

Vonk Belgium organised a protest in front of the Pakistani Embassy in Brussels. This city hosts the headquarters of the European Union, where embassy officials are continuously lobbying for preferential trade agreements with Europe for Pakistani capitalists. Our comrades held placards and demanded the release of their comrade by the rotten Pakistani state.

The comrades of Socialist Appeal and Marxist Student Federation in Britain have been organising weekly protests in front of the Pakistani High Commission in London. On two occasions so far, comrades have chanted slogans against Pakistani state abductions and demanded the release of Amar Fayaz. Later, they presented a letter and petition to the main embassy desk.

Comrades from Socialist Fightback also protested in front of the Pakistani High Commission in Ottawa and the consulate in Montreal. Despite the bitter cold and snow, the comrades showed up in force, shining a spotlight on the crimes of the Pakistani state and demanding the release of their fellow comrade – this shows the real revolutionary spirit of Internationalism.

Comrades from Der Funke in Germany organised a protest in front of the Pakistani Embassy in Berlin and recorded a statement for social media.

And in the United States, a protest was organised by comrades in front of the consulate in New York. Comrades held up banners and posters demanding an end state abduction and the release of Amar Fayaz.

Due to the COVID-19 restrictions, comrades also organised online meetings to support Amar Fayaz and demanded his immediate release.

Supporters took pictures and recorded video messages, sharing them on social media. The campaign has received solidarity from activists and supporters all over the world.

In Pakistan, Progressive Youth Alliance activists organised a day-long twitter storm, and were successful in making #ReleaseAmarFayaz the second-most-shared twitter trend in Pakistan.

Jeremy Corbyn former candidate for Prime Minister in UK and former president of The Labor Party signed the motion which was put in UK parliament few days ago against Amar Fayaz's abduction by security forces. The motion has been signed by 9 MPs of UK parliament.#ReleaseAmarFayaz pic.twitter.com/gIV88Xo8Do

Additionally, John A. Costa, the president of the Amalgamated Transit Union (ATU) has offered support to the Amar Fayaz campaign. ATU is a workers’ union in the United States and Canada that represents employees in the public transport sector. It is affiliated to the American Federation of Labor and Congress of Industrial Organizations (AFL-CIO) in the USA, and the Canadian Labour Congress (CLC). ATU has over 200,000 members throughout North America.

The campaign also received support from Jerry Dias, the president of UNIFOR, the Canadian Freelance Union. UNIFOR was created to defend the interests of independent media workers and to deal with growing inequities. This includes contractors in all media outlets (print, radio, TV and web). The majority of workers in the media are shifting to contractual employment, contributing to an increasing UNIFOR membership in the sector.

The director of the Workers United Canada Council (WUCC) has offered support to the campaign and wrote to the Pakistan High Commission in Ottawa. Workers United represents 10,000 workers across Canada and 100,000 more across the United States. WUCC represents a wide range of industries, including garment and apparel, plastics, auto parts and industrial manufacturing, transportation, warehousing, and distribution, retail, food services, hotels and hospitality, cleaning services, the fitness industry, and healthcare and social services.

Finally, the Belgian General Union of Public Services (ACOD/CGSP) condemned the state abduction of Amar Fayaz and demanded his release through a letter to Pakistani officials.

How can you support the Amar Fayaz campaign?

The Pakistani state has failed to provide the basic necessities of life to a huge majority of the population. In the last two years, tens of millions have been thrown into unemployment and extreme poverty, while the ruling class lives in a state of luxury and abundance. Reports of suicides due to poverty have become common in the country amid increasing levels of mental health problems. Reports of parents committing suicide, along with killing their children due to extreme poverty and hunger, are surfacing.

Meanwhile, the loot and plunder of the ruling class has reached new extremes, with basic items like wheat flour, sugar and petrol being hoarded or smuggled, creating an artificial shortage of these items, leading to skyrocketing prices. No one is ever punished or held responsible for these brutal crimes, which lead to the economic massacre of the population. The price of medicines has been raised by 500 percent by the current government in recent months, due to which the number of people dying needlessly has reached new heights across the country.

In this situation, the struggle of young people like Amar Fayaz is a ray of hope to youth and workers in Pakistan. Fayaz is a committed young activist, who has been struggling against increasing university fees and state brutality towards students. Secret services are being used to brutally crush any form of dissent and efforts to organise the working class. The abduction of Amar Fayaz is also a part of this process going on in the country. Comrades in Pakistan are fighting against this illegal abduction and are organising protests across the country, demanding Amar's immediate release.

We appeal to all comrades of the IMT to support the campaign for Amar's safe return! We ask the comrades to:

You can find templates of motions, letters and emails and other campaign resources on marxist.com and pakistansolidarity.org.