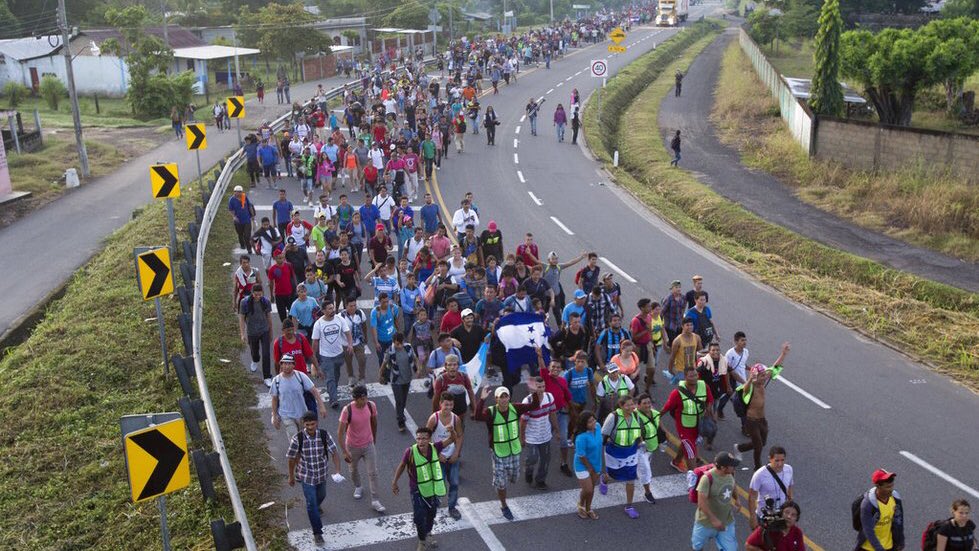 We publish here a joint solidarity statement from the comrades of Bloque Popular Juvenil (El Salvador), Izquierda Marxista (Honduras) and La Izquierda Socialista (Mexico) to the thousands-strong migrant caravan travelling from Central America to the United States. The migrants have been met with prejudice, attacks by the media and state repression – their plight expresses the suffering of a whole region, plagued by the policies of American imperialism and oligarchical rule.

[Read the original statement in Spanish]

On 19 October, thousands of Central Americans, mainly Hondurans – travelling in a huge migrant caravan – were greeted on the southern border of Mexico with tear gas, hundreds of military police, and warplanes flying overhead.

This is the migration policy that American imperialism has enforced on the Mexican government for years. It is not incorrect to say that the American frontier begins in the Suchiate River and not in the Rio Grande. The government and the bourgeoisie of the United States consider Mexico to be its backyard, and therefore obliged to implement and defend all of the USA’s ‘security’ policies.

Hundreds of Central American migrants started the caravan in Honduras a week ago and are headed to the United States. It began with 150 people, tired of their hopeless conditions, who made a call to openly cross different countries where they risk being extorted by the police; where women risk being raped and assaulted; and where they are constantly under threat from gangs and drug trafficking groups. Thus, they are marching in a caravan for safety, as well as aiming to be as visible as possible. The call did not fall on deaf ears: as the caravan progressed, hundreds joined, more than four thousand arrived at the Mexican border.

For those who embarked on the march to seek opportunities in other countries – away from their families and friends – the decision wasn’t taken lightly. Many women and men have been forced to leave their children, sick relatives, and what little they have. In no way is this a journey for pleasure or adventure, as the media has often claimed, telling us these people are "in search of the American dream". In fact, these are men, women and children driven from their lands by violence and lack of opportunities; to look for work, education and a decent life.

Many in Mexico have criticised the fact that thousands of Central Americans are standing on the southern border and trying to cross the country. The most reactionary sentiments emerge among the middle class, the bourgeoisie and some declassed sectors, who call our Central American brothers criminals, murderers, filthy, etc. This reflects the dominant ideology of the ruling class, which teaches us to be humble and servile to the powerful (the bourgeoisie and imperialism); and haughty, arrogant and not at all in solidarity with the poorest. It is a policy of division for those at the bottom, and reverence for the exploiters.

It is clear that racist sentiments are not widespread throughout the Mexican population; on the contrary, there is strong solidarity, empathy and support for all those who come in the caravan from the working class. This is not surprising: we share a common history of struggle and suffering. We are the same: from poor nations, children of violence, victims of a predatory capitalist system that was brutally established to destroy our natural resources and exploit us to the maximum.

It was not until 1823, when – due to struggles between the native elites – did the imperialists separate this territory between Mexico and Central America. Afterwards, the different interests of the local landlords and bourgeois maintained those artificial boundaries. Central America was once a single land and it was a crime to divide it: the intention was always to control and plunder the territory.

The Creole bourgeoisie has always been cowardly and incapable of developing the productive forces and carrying forward the slogans of the national democratic revolution: they are bound hand and foot to imperialism. They are loyal servants to the rapacious policies of the international elites that dominate the world. These are the ones who have truly expelled our people from our lands by provoking violence and poverty, and making it impossible for a person to live in their home countries with dignity.

They are the ones who are alarmed to see us passing through different countries, those who inflame prejudices and say that the poor are murderers and criminals. In reality, the real looters and murderers are those who have kept all the natural riches of our lands, while hiding behind armies, television broadcasters and all those who still cling to nationalism.

Remember, it was American imperialism and the Honduran oligarchy that implemented a coup against former Honduran President Manuel Zelaya, for simply offering better salaries and working conditions, and lowering the price of gasoline, etc. The polices imposed after the coup impoverished the people. The right wing has ruled, militarising the country and plunging it into bloodshed. Last year, they supported the rise of right-winger Juan Orlando Hernández to the presidency through blatant electoral fraud, which has aggravated even more the situation of misery and exploitation. This is the history of every country in the region, you only need to change the names of the characters.

The oligarchy in the Honduran government faced opposition from an insurrectional mass movement after the fraud of 2017. In reality, the government is weak: it does not have a solid social base. The Honduran people voted massively for a change in those stolen elections. Under the coup leaders, we have seen poverty and misery deepen even more. 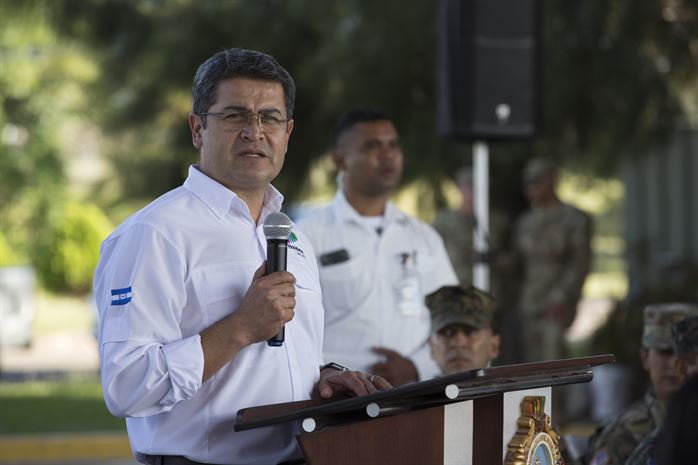 The bloody hands of imperialism and oligarchy are all over the region. It was American imperialism and the Honduran oligarchy that implemented a coup against former Honduran President Manuel Zelaya and supported the rise of right-winger Juan Orlando Hernández / Image: Kimberly Aguirre

As it advanced, the caravan was expanded with migrants from other countries in the region, all chanting: ¡Fuera JOH! (“JOH out!”) The migrant caravan is exposing the rottenness of the capitalist system in Central America and Mexico, as well as the reactionary policies that flow from imperialism in the region.

We – as young people, workers and women of the working class – are against any policy that divides our class, be it national, religious, racial or based on gender. We are internationalists because the working class cannot organise itself on a national basis to defeat an international enemy. Therefore, we are not only supporting our fellow migrants, who are looking for what imperialism has denied them in their countries of origin – we are for the abolition of all the borders, that only serve to weaken us in the face of our true enemies: the oligarchy and American imperialism. 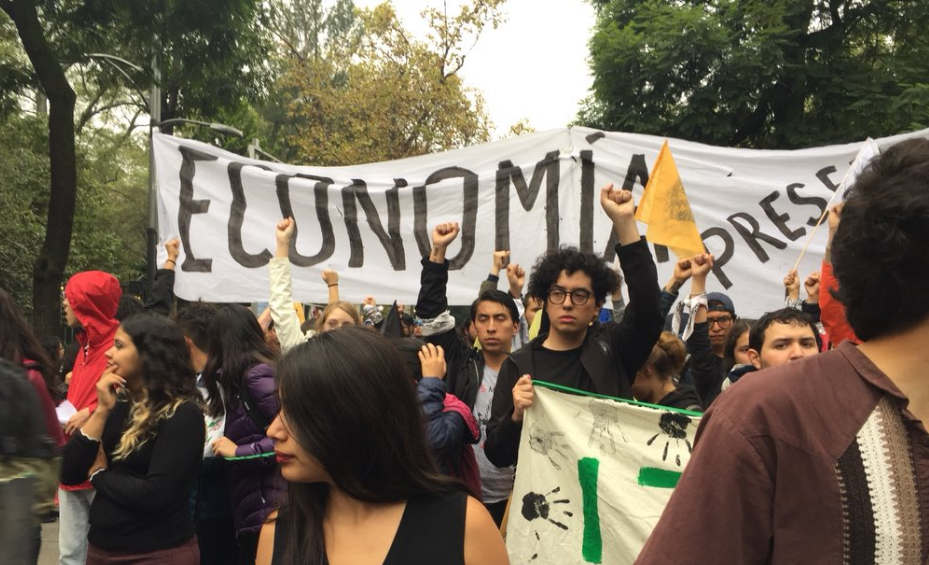 Only the unity of the Central American, Mexican and Latin American peoples will be able to overthrow the capitalist system, which prevents us from living happily in our lands / Image: Twitter, Hillary Goodfriend

Mexicans, more than anyone else, know perfectly well what it means to emigrate to find better living conditions. More than 900,000 Mexicans have been displaced by the war against drug trafficking and there are more than 20 million Mexicans living in the United States illegally. Mexicans also understand perfectly well what violence means, because in Mexico, 30,000 people have disappeared and more than 300,000 have been killed in the last 12 years. The Mexican working class does not buy the story that the Central Americans are coming to take away our jobs, because right now there is no work for the Mexicans themselves! We are united because their demands are our demands, because their path is our path, because their lives are our lives.

Only the unity of the Central American, Mexican and Latin American peoples will be able to overthrow the capitalist system, which prevents us from living happily in our lands. The working class is one, anywhere in the world: including the United States, Canada and other developed countries. We are internationalists because we believe that we have more in common with any worker in the world than with the rapacious bourgeoisie of Mexico or any Central American country. Our struggle is the struggle of all the exploited across the globe.