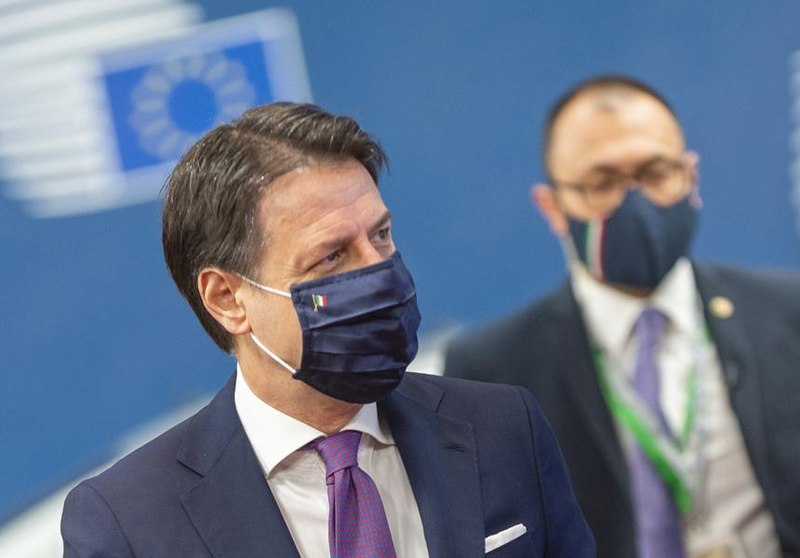 Yesterday, Italian Prime Minister Giuseppe Conte narrowly survived a vote of no-confidence (156-149), but he’s not out of the woods yet. He is without a majority in the upper chamber, and opposition leaders are still seeking his resignation. His authority is in tatters and his coalition is hanging together by a thread. This article, published by our Italian comrades last week, explains the crisis embroiling the Conte coalition in the run-up to this vote.

Record numbers of new COVID-19 cases in the US and Great Britain are a clear warning that the so-called third wave of the pandemic is in full swing. In Italy, France, Germany etc., transient social distancing measures to stop the virus from spreading have proved to be unsuccessful. They slow the spread down temporarily, but not long enough for the hospital wards to empty.

Meanwhile, the charade of prohibitions, restrictions, unmet deadlines, exceptions, interpretations, and other absurdities, is creating a state of exasperation in growing sectors of the population.

All of this has very little to do with the malign nature of COVID-19, and a lot to do with the government’s decisions and the interests it defends. Government paralysis is not accidental and is not merely an outcome of the ineptitude of this or that minister; it is the inevitable consequence of a conscious decision to not interfere with economic activities—to uphold production and businesses at any cost wherever possible. Given that there are no serious studies conducted on the transmission of the disease in the workplace, it would appear that contagion risk only exists within a family setting.

Once this approach is adopted, there is only one possible course: continuing to lecture on individual behaviour, while vacillating on what is allowed and what is not; everything else goes by the wayside. The clearest example of this hypocrisy was the government appeal to stay at home during the holidays, while encouraging people to go out and spend in order to receive 10 percent cashback.

Inequalities and injustices mount every day, and the rhetoric of "we are all in the same boat" no longer has any effect. There are sectors of the economy that, upon closing, forced hundreds of thousands of employees and self-employed workers to try to make ends meet with unemployment benefits and government subsidies, while others are reaping massive production profits. Last November, during the second wave of the pandemic, electricity consumption by large industrial companies was higher than during the previous year. Every day, the data demonstrates the widening social gap, in our country and throughout the world.

But the government is in disarray. With regards to the education system, each region is implementing its own restrictions. The promised national timeline for school reopenings (7 January, then postponed to January 11) applies only to three regions (about 250,000 students). Distance-learning continues to alienate millions of young people, and the exasperating charade of broken promises around reopening dates is never-ending.

Like the generals on the losing side of a war, Conte and his ministers continue to promise a future offensive that will definitively defeat the enemy: a lockdown and we'll get out, a red zone and then we'll be safe, the impending vaccine, European money, a few more sacrifices, a little more patience…

The government's image of disarray is completed by the clash between Conte and Matteo Renzi (former prime minister), which threatens the government with crisis and with the withdrawal of ministers from his party ‘Italia Viva’: a rare example of a party that has more parliamentarians than voters. This is a farcical crisis, because everyone knows that early elections in the current context are out of the question, so the deadly duel is actually conducted with toy weapons.

What does Renzi want? Simple: he wants to be involved when an anticipated future Recovery Fund is split. He also wants to be accredited as the guarantor of Italy’s financial regulation, which has long been requested by the European Union (hence his battle on the ESM). In addition, to refrain from being too modest, he lets the newspapers talk about his career ambitions of being a potential future Secretary of NATO...

Where Renzi will actually manage to accomplish any of this remains to be seen. His leverage is limited: President Sergio Mattarella is not willing to blindly unleash a state crisis; moreover the Recovery Fund, the budget on which the various "subsidies" depend, and even the purchase of vaccines are all factors that have to be voted on before the discussion of a possible cabinet reshuffle opens.

If ‘Italia Viva’ gains greater political weight, the result will be to shift government policies even more towards employers' interests. It always represents the same objectives: more precariousness for workers, and more power for companies. It is no coincidence that the Ministry of Labour and the Ministry of Infrastructure are among the positions sought after by the party, with Maria Elena Boschi, Rosato, and Renzi himself amongst the candidates for these positions.

In this game of musical chairs, the PD (Democratic Party) could take advantage of the situation to rid the government of some of the 5 Star ministers that they consider too “pro-welfare.”

If, contrary to predictions, the government crisis becomes tangled without remedy in the clash between irreconcilable ambitions, the predictable outcome would not be elections, but a new government supported by an even-more-unlikely majority than the current one.

The health emergency is the shield that allows the entire political system to enjoy what appears to be total impunity. Millions of people are forced to live on a day-to-day basis, facing increasingly difficult circumstances as best they can, and this has the temporary effect of freezing contradictions beneath the surface. But this is a ticking timebomb. It's not necessarily a matter of waiting for the pandemic to end. The first student protests that we’ve seen recently show that when the pressure builds to a certain point, the fight "against" the pandemic becomes a fight "within" the pandemic.

In addition to ongoing problems with the school reopenings, there remains the threat of a looming expiration date (31 March) to a government policy restricting layoffs, while unemployment has reached 2.5 million.

While the entire parliamentary left (inside or outside the PD) and the union leaders are clinging desperately to this government and doing their utmost to appeal to responsibility, collaboration, and discipline, our task is exactly the opposite: to rely on widespread distrust and be present wherever these contradictions come to light.

Thus far, the government has secured its survival with promises on the health front and with debt on the economic front. But sooner or later, debt and promises must be honoured, and if this does not happen, the day of reckoning will come.