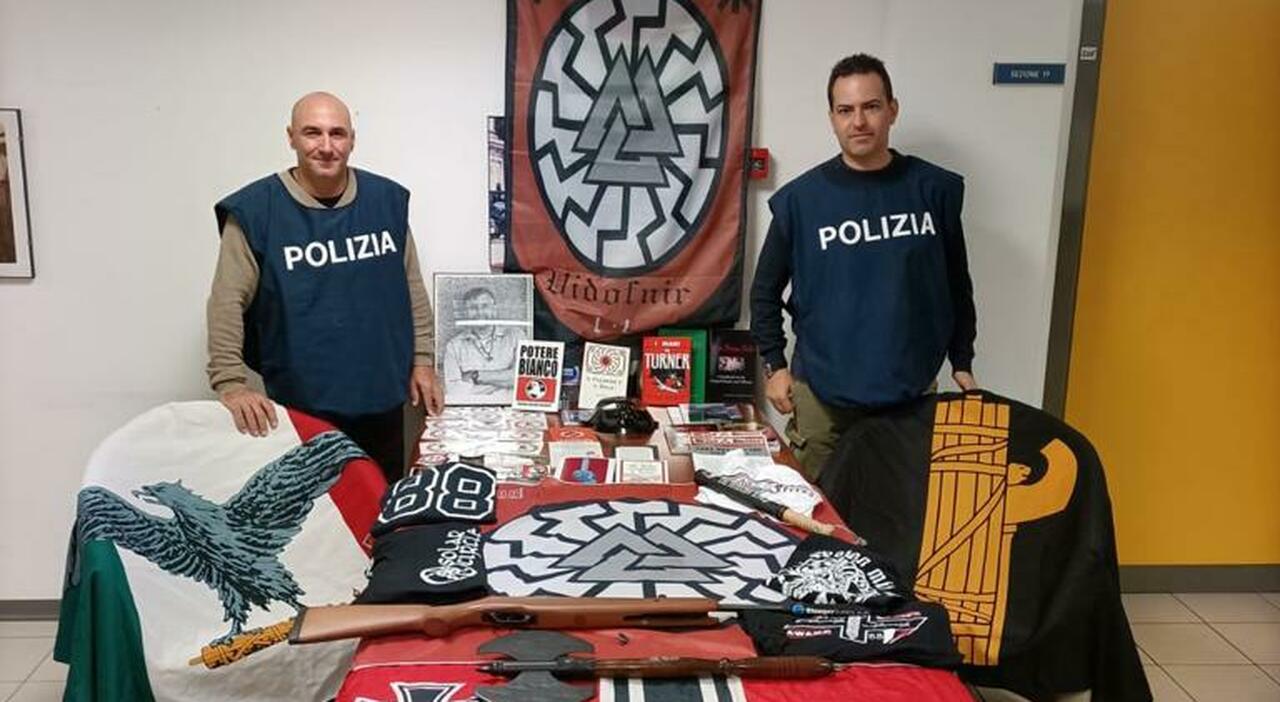 Four members of a neo-Nazi terrorist cell have been arrested in Italy on suspicion of plotting terrorist attacks in the country. A police investigation revealed links between this organisation and fascist groups in Ukraine, including the notorious Azov battalion. This incident highlights the hypocrisy of western imperialism, which is funnelling cash and guns to armed groups in Ukraine with neo-Nazi and far-right roots, evidence of which are regularly dismissed as overblown or “Russian propaganda”.

But as this incident shows, the support of imperialism has consequences. Not only are the arms and training it supplies fuelling the conflict, they are creating a source of future far-right terrorism, as fascists from Europe and beyond return from combat trained in the use of firearms and explosives.

Members of the uncovered terror cell in Italy, known as the ‘Order of Hagal’, have been accused of plotting to carry out “violent acts” against both the police and members of the public. A longstanding investigation into their activities has revealed evidence of weapons stockpiling, whilst extensive computer searches and wiretapping revealed intentions to carry out numerous murderous attacks.

Police seized “soft air weapons” from the organisation that could be “easily modified to fire authentic bullets,” alongside ammunition, knives, an axe and a grenade launcher. Some members of the group are known to have travelled abroad to train in Krav Maga and the use of long and short-range weapons (for which they were even awarded a diploma). They are also thought to have conducted paramilitary training in various Italian cities, and held seminars promoting white supremacist ideas. All this shows the serious and organised nature of these individuals, who the police believed to be preparing an attack. And neither were they isolated.

According to Italian authorities, the ‘Hagal’ group is known to have been in “direct and frequent” contact with the Azov battalion, as well as other far-right groups in Ukraine, such as Pravy Sektor and Centuria. A known fifth member of the group has evaded arrest because he is currently in Ukraine, fighting alongside the Azov battalion against Russian forces.

This now-fugitive Anton Radomsky was allegedly planning an attack on the ‘Volcano Buono’ shopping mall in Naples. Another member, Giampiero Testa (who did not manage to evade arrest) allegedly intended to attack a police station in Marigliano. Referencing the 2019 mosque shootings in Christchurch, Testa said in a 2021 wiretap that he “would make a massacre like the one in New Zealand, but I wouldn’t go to the blacks, I would go to the barracks in Marigliano.”

This reference to the 2019 massacre in New Zealand is illuminating, because it highlights how Ukraine, and the Azov battalion in particular, has become established as a critical node in this far-right network. 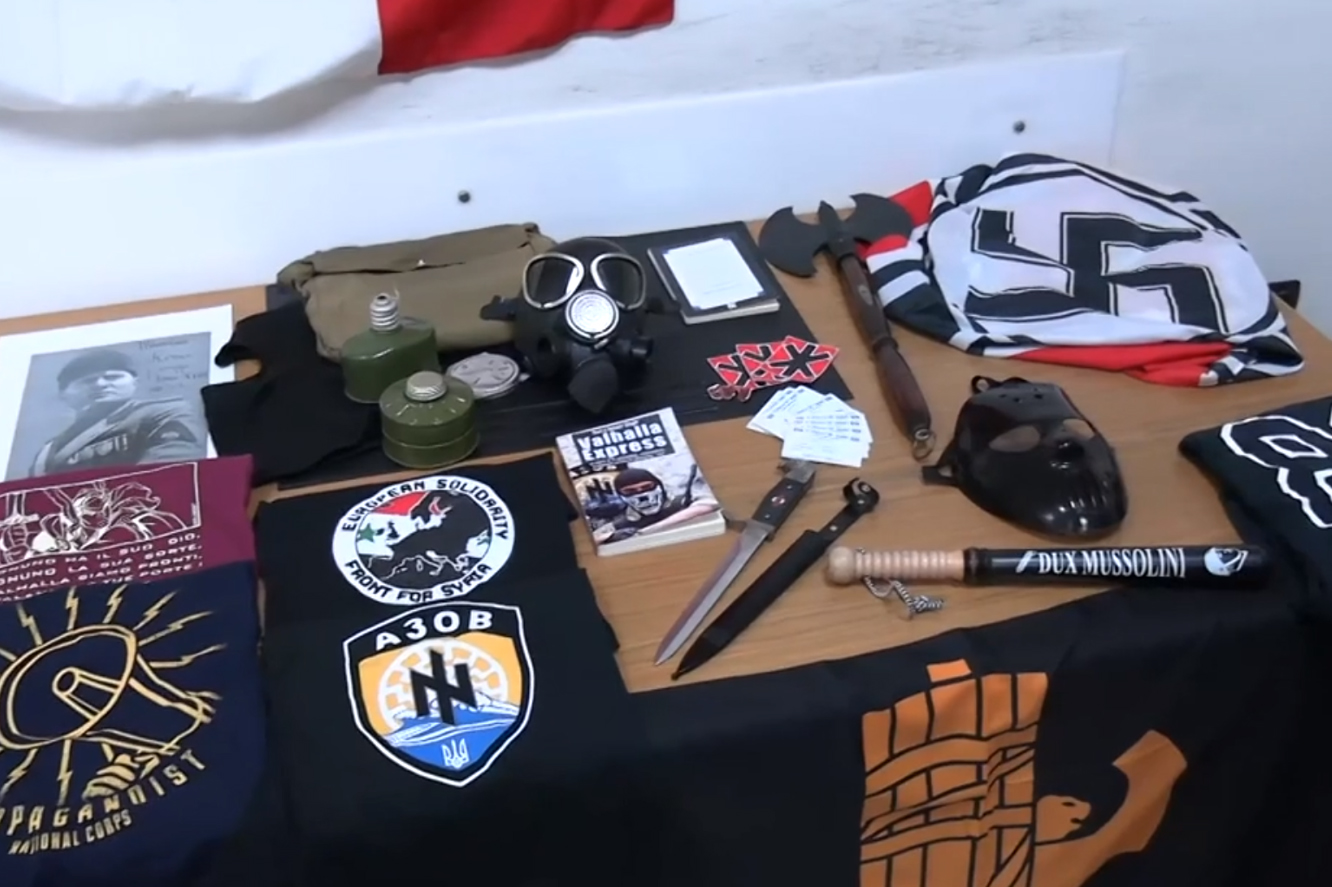 The Azov battalion in Ukraine has become an important node in an international, far-right network. Pictured are images of fascist paraphernalia (some featuring the Azov logo), as well as weapons confiscated from the 'Hagal' neo-Nazi terror cell by Italian state police / Image: fair use

Brenton Tarrant, the perpetrator of the Christchurch shootings, claimed in a sprawling manifesto to have visited Ukraine prior to the attack, and wore a flak jacket during the assault featuring a symbol commonly used by the Azov battalion (the Nazi-era ‘Black Sun’ symbol). And while such associations are frequently dismissed by western media as being disseminated by “Pro-Kremlin actors” – mainly due to Putin having stated repeatedly that one of his reasons for the invasion of Ukraine was “de-Nazification” – there really are no grounds to the assertion that Ukraine does not have, as Reuters put it in 2018, a “neo-Nazi problem” (a problem that Zelensky himself has also joked about in the past).

Indeed, this was often pointed out before Putin’s invasion of Ukraine, going back to 2014, when the Azov battalion first grew to prominence and gained international notoriety for their activities in the wake of the Maidan coup. Following the rise of a right-wing, pro-western regime at that time, the volunteer battalion was created by far-right activists who had been active during the Maidan to go and fight in the government’s ‘Anti Terrorist Operation’ against its own people in the Donbas region – for which the group was accused of war crimes by Amnesty International and the United Nations, amongst others. A few months later it was incorporated officially in the state apparatus through the National Guard.

In the age of the internet, with the almost immediate proliferation of such news around the world and discussion of it on social media apps such as Telegram, it is not hard to see how such groups can quickly become points of reference and inspiration for right-wing extremists around the world. For example, Christopher Hasson, a former United States Coast Guard lieutenant and self-confessed white nationalist who plotted multiple acts of terrorism before his arrest in 2019, “wanted to use tactics from the Euromaidan protests and the Donbass conflict in Ukraine”.

But not only is the region an example for isolated individuals; as a 2019 report by the Soufan Center pointed out, it is increasingly being used as a “battlefield laboratory” by white supremacists around the world. Many thousands of people have travelled to participate in the conflict, from at least 50 different countries. Although now often portrayed as heroic freedom fighters, the Azov battalion contains a hardcore motivated by neo-Nazi beliefs – something the western media were happy to point out prior to Putin’s invasion in February, but following which they immediately dropped silent about. It should be noted, that none of the events surrounding the 'Hagal' cell and its links to the Azov battalion have been reported in the western media outside of Italy.

The reality is that a large number of white supremacists, from all over the world, are able to receive the best weapons training and instructions in warfare, directly funded by western imperialism, and are then able to hone their new skills in an actual conflict zone. All the while they are forging links with similar-minded extremists from around the world. And back home, the media is whitewashing them as ‘heroes’ in an intense campaign of war propaganda!

The danger exists of western imperialism turning Ukraine into an epicenter of radicalisation for the global white supremacist movement (and future far-right terror) in just the same way that it made Afghanistan a centre of the global jihadist movement, where it brought together fundamentalists to train, swap tactics and solidify networks. It is well documented how the US trained and funded Islamist groups to fight against the Soviet Union in the 1980s. At the time, like the Azov battalion today, it whitewashed the mujahideen as ‘freedom fighters’. It is also now well known what the blowback from this was, with groups such as al-Qaeda directly spawning from this imperialist intervention.

Despite how terrorist attacks like 9/11 defined an entire era in the West, the imperialists are utterly disregarding these past consequences of their actions, whipping up the potential for future horrors as they pursue their reactionary imperialist interests in Ukraine. But if you point any of this out, you are a wild conspiracy theorist, or in the pocket of Putin.

What the arrest of these neo-Nazis in Italy shows is that there are consequences to western imperialism’s meddling.