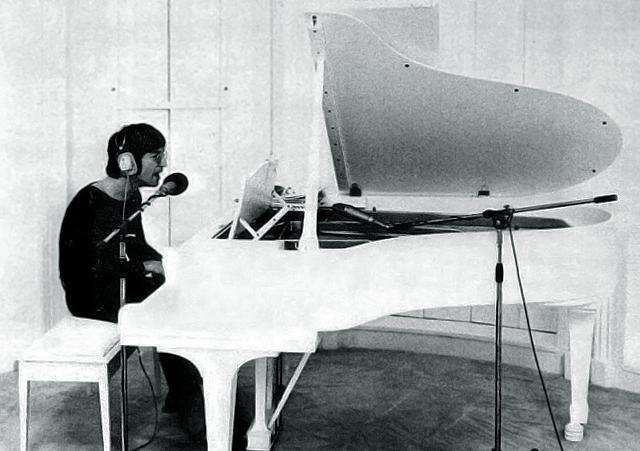 Twenty-five years ago today John Lennon was killed in New York. There was a mass outpouring of grief all over the world. This was because he symbolised something different from the mainstream music industry. He gave expression in the words of some of his songs the genuine feeling of disgust of many workers and youth at what capitalist society stands for.

The 25th anniversary of the death of former Beatle John Lennon in New York on December 8th 1980, following a shooting incident involving a deranged fan, will no doubt be marked with considerable interest and media attention by many around the world. The mass outpouring of grief which following his death has, for a rock star, only been matched - in the US anyway - by that for Elvis Presley (1977) and Jerry Garcia (1995) and to a lesser extent Bob Marley and Kurt Cobain.

Many other rock and pop stars have breathed their last over the years, some without anyone really noticing, yet the passing of the above individuals was most certainly noticed. What has linked them together was the fact that their deaths were untimely and that they were seen to be, in one way or another, icons whose lives touched a chord in people.

As a former Beatle, Lennon's death was never going to be a non-event, even if he had died in old age of natural causes, yet the effect his death had on people - and still has - cannot be explained simply by this claim to fame. Nor can it be explained away by the success of his solo career - because compared to many it was not that successful. His early solo albums were largely experimental and only reached a limited market. Later albums such as 'Imagine' and 'Mind Games' were more mainstream and sold well, but probably do not exist in many people's current record collections. He had some success with singles but, again, only one song has remained in serious circulation - Imagine. After 1975 he released no recordings or did any concerts, going into virtual retirement until shortly before his death when he released the moderately successful 'Double Fantasy' album.

So in many ways it was the man rather than the music which people chose to mourn. As a Beatle, Lennon was seen as being the anti-establishment one whose songs often revealed a hidden depth as against the happy, commercial one (Paul), the cheeky chappy one (Ringo) or the mystic nutter one (George). He would also be the first Beatle to clearly take up social and political causes. Following the start of his relationship with artist Yoko Ono in 1968, he started an anti-war campaign - a 'bed in!' - and released the anthem 'Give Peace a Chance'. Later songs would deal with racism, Vietnam, women's rights and Northern Ireland. He was known to financially support left-wing causes and, as a result, had a somewhat large FBI file and would have problems getting a US work permit. Following his break from serious drink and drug abuse he would also take up the issue of domestic violence and the effect that drinking in particular had on personal relationships. Many of his songs in that respect were deeply personal aimed at drawing out his inner demons, some of which went back to his early chaotic childhood. His aim to give a stable upbringing to his children was to directly lead to the late 70s retirement period as he sought to become a 'house-husband'.

However even in retirement he remained a strong campaigner for peace and social justice. He had some problems squaring this with his massive personal wealth which he discussed in an interview in Playboy magazine:

PLAYBOY: On the subject of your own wealth, the New York Post recently said you admitted to being worth over $150,000,000 (1980) and…
LENNON: We never admitted anything.
PLAYBOY: The Post said you had.
LENNON: What the Post says - OK, so we are rich; so what?
PLAYBOY: The question is, How does that jibe with your political philosophies? You're supposed to be socialists, aren't you?
LENNON: In England, there are only two things to be, basically: You are either for the labour movement or for the capitalist movement. Either you become a right-wing Archie Bunker if you are in the class I am in, or you become an instinctive socialist, which I was. That meant I think people should get their false teeth and their health looked after, all the rest of it. But apart from that, I worked for money and I wanted to be rich. So what the hell - if that's a paradox, then I'm a socialist. But I am not anything. What I used to be is guilty about money. That's why I lost it, either by giving it away or by allowing myself to be screwed by so-called managers.

This dilemma apart, Lennon's reputation as an idealist whose views as a campaigner for a better society remain untarnished even by decades of cynical 're-assessments.' Every year, at this time, his most commercially successful song 'Imagine' gets played time and again on the radio. But it is not simply a nice, Christmas song full of meaningless platitudes but rather expresses a world outlook which many of us would agree with:

Imagine no possessions
I wonder if you can
No need for greed or hunger
A brotherhood of man
Imagine all the people
Sharing all the world...

At a time when the rock and pop world seemed to be obsessed with making money and having a good time and to hell with the rest, and the political world was about to be dominated by the reactionary double act of Thatcher and Reagan, Lennon was seen to be holding out against this lack of humanity. His message was one of unity, peace and a better future for all - a message which many youth, especially, responded to in 1980 and still do 25 years later:

It is a message that requires us to mobilise the youth and workers of the world to defeat imperialism and capitalism and build a socialist future that will make these lyrics a reality.