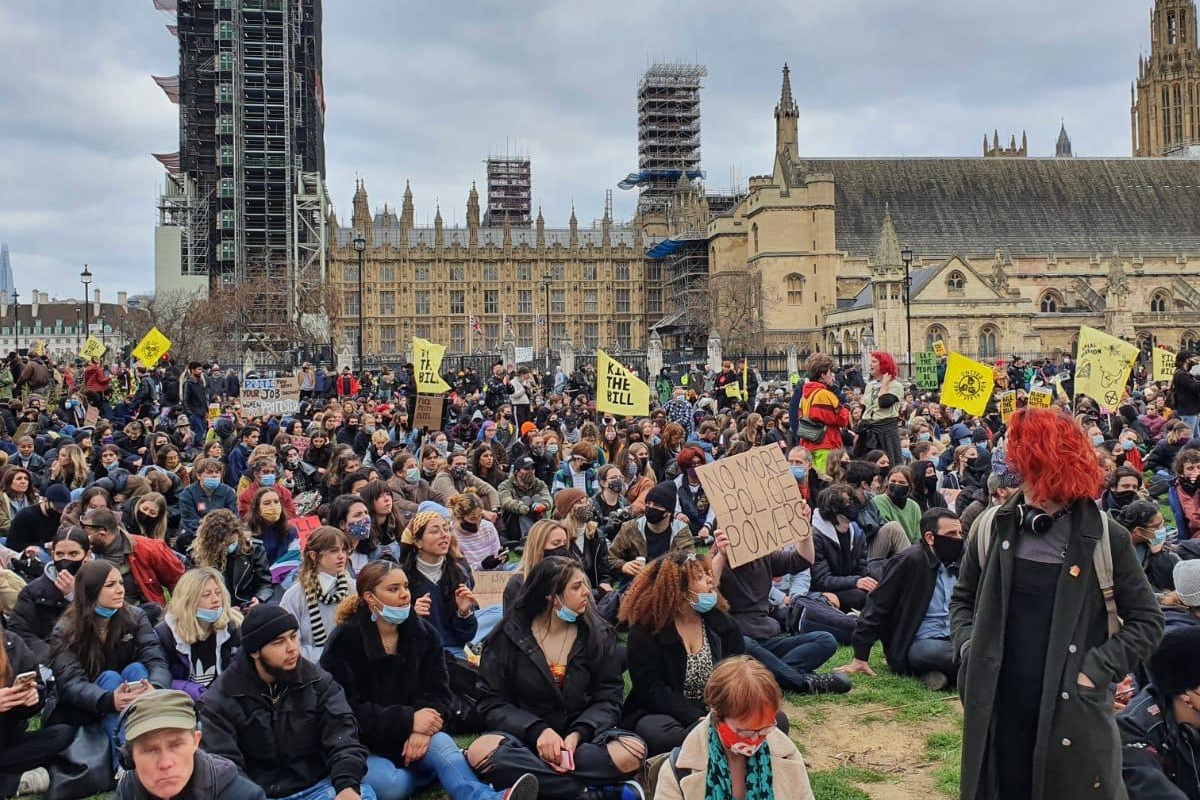 Over the weekend, demonstrations took place across Britain in defence of the right to protest. The labour movement must channel this energy into a mass campaign – to smash the Tories' latest repressive laws, and to bring down this whole rotten government.

This new legislation would dramatically curtail the right to demonstrate.

There was a clearly militant mood amongst protestors, with many drawing radical conclusions about the real role of the police and these new Tories laws: to serve the interests of the ruling class.

Many young people had travelled from Kent and Birmingham to join Saturday’s protest. Those demonstrating were fully aware that this legislation comes not from a place of confidence amongst the ruling class, but from fear.

Several speakers and attendees pointed out how the Black Lives Matter movement had inspired millions, drawing in layers who had never previously been politically engaged.

Crucially, it also shone a spotlight on the institution of the police. Far from protecting and serving communities, the police have all-too-often engaged in brutal violence against them.

Similarly, recent events – from the suppression of a peaceful vigil at Clapham Common in the wake of Sarah Everard’s murder (allegedly by a Met Police officer); to the police brutality against protestors in Bristol – have also exposed the real role of the police.

As one protestor correctly commented: “It’s ridiculous to assert that more police is the answer in response to police violence. That didn’t protect Sarah Everard.”

There were several fiery speeches at the protest. But those by Jeremy Corbyn and Howard Beckett (the assistant general secretary of Unite the Union) stood out the most.

Corbyn rightly pointed out that not a single reform has ever been granted from above without struggle from below. He related this to the Peterloo massacre, the Tolpuddle Martyrs, the revolutionary movement of the Chartists, and the mass mobilisation in defence of the Pentonville Five.

We will always defend the right to demonstrate against injustice. Proud to address today's #KillTheBill demonstration - together we will stop Boris Johnson's protest ban pic.twitter.com/R3TTzy1NlY

Connecting with the radical mood on the demo, the former Labour leader even pointed out how illegal resistance was sometimes necessary.

Howard Beckett, meanwhile, sharply attacked the hypocrisy and double standards of the justice system under capitalism. For example, the Met Police and Tory government have used COVID restrictions as an excuse to trample on the right to protest. At the same time, not a single boss had faced punishment for forcing workers into unsafe conditions, despite thousands of complaints. 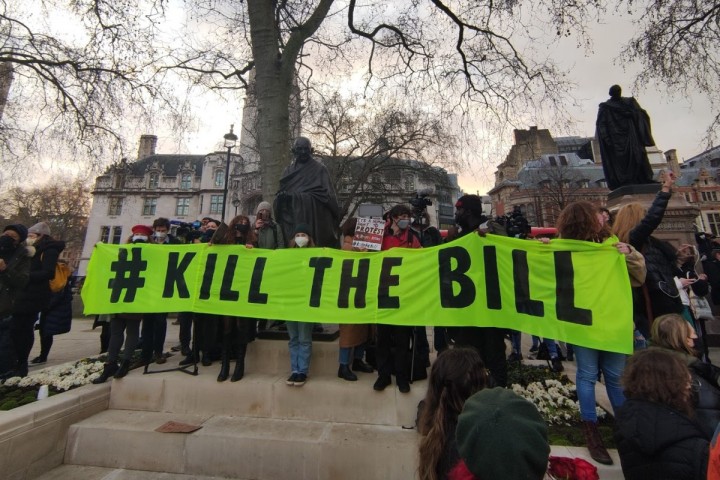 Further protests must be called and linked to the wider labour movement / Image: Socialist Appea

The crowd cheered loudest when those on the megaphone made radical statements. Nevertheless, unfortunately, none of the speakers offered a clear way forward.

Many called for continued demonstrations – and this is correct. But these must be connected to a broader struggle by the labour movement.

The Labour Party and trade unions should be mobilising and organising activists en masse, in order to draw in even wider layers in the fight against this anti-protest legislation, and against all the anti-union laws that are already in place, utilised by the bosses to repress workers.

This should be linked to a mass campaign of strikes and protests – with the aim not only of defeating this latest Tory bill, but bringing down this whole rotten government.

Such a show of strength by the working class could pressure the government into a U-turn. After all, there is no force on earth more powerful than the working class, when it is organised and mobilised.

The demonstration on Saturday offered a glimpse of the anger that exists in society. But in order to channel this energy and smash this Tory bill, the movement needs bold, militant leadership. 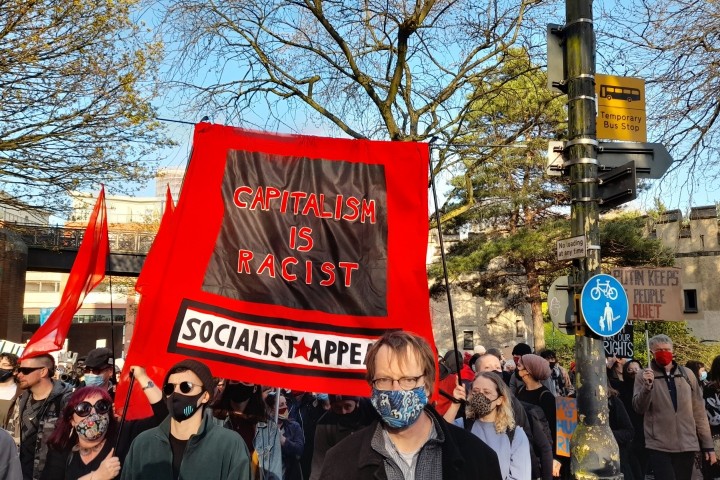 Over 3,000 came to latest #KillTheBill protest in Bristol. A welcome addition to this protest were banners from a handful of trade unions and one Labour Party, as well as Bristol Socialist Appeal.

That such numbers turned out for the fifth protest in the city within two weeks – and in the face of brutal attacks from the police – is testament to the determination of activists to consign this bill to the dustbin of history.

The police were noticeable this time by their low profile: no dogs, horses, or riot police were visible. No doubt this was a result of the growing backlash against their thuggish behaviour at previous protests, which has included attacks on journalists.

In addition, the police have been shown to be blatant liars, forced to meekly admit that the widely reported ‘serious injuries’ suffered by officers during the first protest – including alleged broken bones and a punctured lung – hadn’t happened after all.

This only adds to the shameful response of those Labour leaders – locally and nationally – who jumped the gun and joined the establishment’s hand-wringing about ‘violence’, without asking: ‘whose violence?’

Build mass opposition to the bill!

With protests carrying on in the face of brutal attacks from the state, the people of Bristol have shown a tremendous determination to stand firm. Now the campaign needs to be stepped up a level and widened.

Go back to workplaces and places of study; talk to friends and colleagues. Demand that your organisations come out against the bill, like trade unions such as Unite and the NEU have done. The trade unions need to prepare strike action against this bill, which threatens to weaken their right to organise.

On Saturday 3 April, hundreds of people marched through Sheffield city centre, rallying against the Police, Crime, Sentencing and Courts Bill. This came a week after an almost thousand-strong protest in the city. This shows the sustained anger towards this repressive police legislation.

Protesters held signs denouncing the rise of a ‘police state’ in Britain. And chants of “Priti Patel, go to hell” could be heard as the march progressed through town.

Before the march, a rally was held at Devonshire Green. The speeches given reflected the radical mood of the demonstrators. Many speakers drew links between this draconian legislation and the oppressive nature of the police in general, highlighting how sexism and racism are deep rooted in police forces across Britain.

The radical energy amongst workers and youth was also expressed in Sheffield, as elsewhere, by blocking major city centre roads, including the road outside a local police station. Far from being angered by this, commuters and bus drivers beeped in approval. And many onlookers joined the march to hear the concluding speeches.

The police presence was notably larger this week than last. There were no confrontations, however, despite the palpably militant mood and fiery anti-police rhetoric.

At the end of the demonstration, speakers on the open mic attacked the state as a whole; some attacked capitalism. This included one Socialist Appeal activist, who highlighted the control that big business has over the Tory government.

It is the ruling class’ desire to protect the property of the elite through police violence, the comrade explained, that is the core reason for the bill’s introduction.

This message was received with loud applause from the crowd, who had already marched through the streets of Sheffield chanting “the enemy is profit!”.

Overall, the protest showed the intense indignation of people in Sheffield towards the new crime bill, and towards the injustice the working class – especially women and minorities – face at the hands of police.

The struggles against racism, the oppression of women, police brutality, and big business were all linked together by those protesting. This reflects the growing realisation that these struggles need to be united, as part of a wider fight to topple the rotten capitalist system.

Sheffield workers and youth have shown their determination to fight back against state violence and capitalist exploitation. To do this, we must link these particular struggles against injustice and oppression to the class struggle, and the need to transform society along socialist lines.

Model motion: For a mass campaign to defend the right to protest!