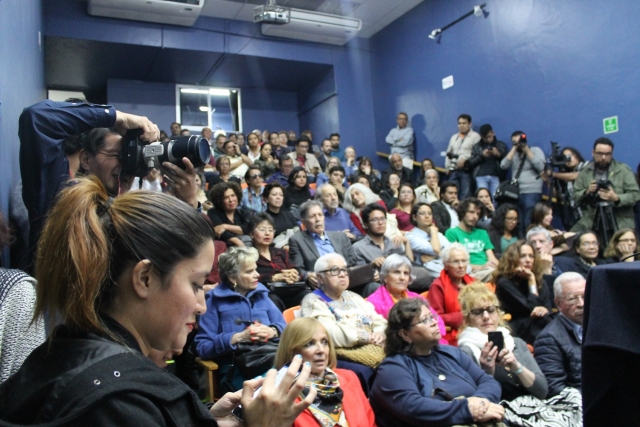 On Friday, 10 November, 250 people crowded into the Casa Museo Leon Trotsky (the Trotsky Museum) in Coyoacan, Mexico City, for a meeting on the subject of the bestselling novel about the assassination of Trotsky, The Man who Loved Dogs by the celebrated Cuban writer Leonardo Padura. The meeting was an outstanding success.

The great attraction of this event was the presence of the author himself. The other speakers were Alan Woods of the International Marxist Tendency, the editor of Marxist.com, and Esteban Volkov, the grandson of Leon Trotsky and director of the museum.

Such was the degree of expectation that the museum found itself totally overwhelmed by the public response. Two hours before the meeting was due to start, the queue began to form. Soon the limited space inside the museum was completely full, with many people standing or sitting on the floor and steps. In the end many were left disappointed. Probably there were as many left outside as those who were lucky enough to get in. 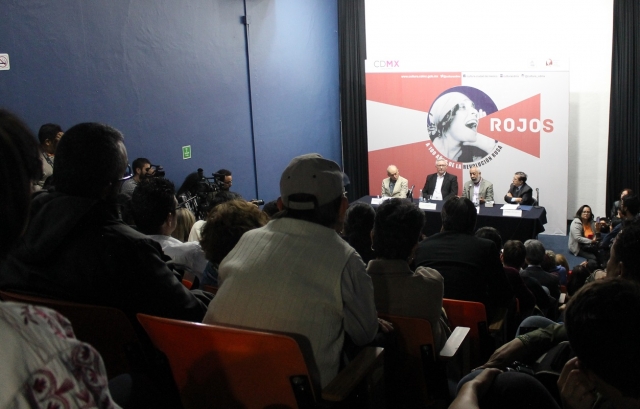 The main auditorium holds a maximum of a hundred people, so seats were placed in the adjacent hall and a screen put up so that the meeting could be seen.  The speakers were introduced by the chairperson, Dr. Rolando Tamayo y Salmorán. The first to speak was naturally Leonardo Padura who was greeted with enthusiastic applause.

The writer began by explaining that he had long wanted to travel to Mexico to meet Esteban Volkov, who features in his novel as a young boy called Sieva. He went on to explain how he came to be interested in the life and ideas of Trotsky, who had been turned into an unperson, not only in the USSR but also in Cuba. 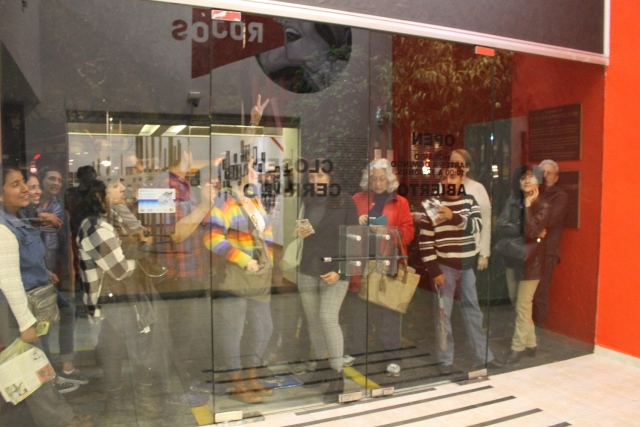 People queuing up before the opening of the event

“I first visited Mexico as a journalist in the 1980s. I knew nothing at all about Trotsky but I visited the museum and saw the room where he was assassinated. It made a profound impression on me. I asked myself how was it possible for someone who played such a role in the Revolution and Civil War simply to cease to exist.

"I went to the library in Havana and found two books about Trotsky. One was called Trotsky the Renegade and the other was Trotsky the Traitor. These were the only official sources available in Cuba at that time. But then something extraordinary occurred. The Berlin Wall fell and after that a mass of material that had been hidden in the archives suddenly became available."

Leonardo then started to study the life of Trotsky and gradually the idea took shape in his mind of writing a novel. He went to Russia to investigate the archives, but was astonished to find that there was nothing at all about the assassination of Trotsky. It seems that Stalin followed the plans to assassinate his enemy in great detail and was given daily reports by his agents, but once he had read them, he burned them. In this way an experienced criminal eliminates all traces of his crimes.

At the centre of the planned novel would be the man who murdered him. But here the difficulties were far greater. While the life of Trotsky is very well documented, there is next to nothing about his murderer, Ramon Mercader.

“I went to Barcelona to try to get contact with members of his family, but was everywhere met with a wall of silence. Eventually I found a doctor [in Cuba] who had been in charge of radiography when Mercader was receiving treatment. He was astonished to learn the real identity of his patient, but when I asked him if he would be prepared to tell me something about him, he simply said no.”

Using the bits and pieces he had, Padura was obliged to use his imagination, in addition to comparisons with similar cases to build up a picture of “the man who loved dogs”. The result is very convincing, although Padura insists that “what we have here is not Ramon Mercader but only a possible Mercader. There are other possibilities.”

At the end of his speech, Leonardo stated that although he was not a politician and his novel was not intended to be a political one, nevertheless, he was aware that it had serious political implications.

Referring to the centenary of the October Revolution, he said that those who carried out that Revolution were striving for the same Utopia that has driven men and women for centuries. They were fighting against injustice and oppression in order to build a new and better world based upon equality. “That vision was subsequently perverted into its opposite. The time has come to 'revive utopia'" by which he clearly meant the original ideals of October and to continue the fight to change society.

These inspiring remarks by Leonardo Padura were given a rapturous applause by the audience, which was predominantly young but with a sprinkling of older veterans. He was followed by Alan Woods, who began by saying:

“In this world there are plenty of books, many bad, even more mediocre, there are also some books that are good or even very good. But there are very few works of genius. I consider that this book is one of them.” The audience expressed their approval with loud applause. 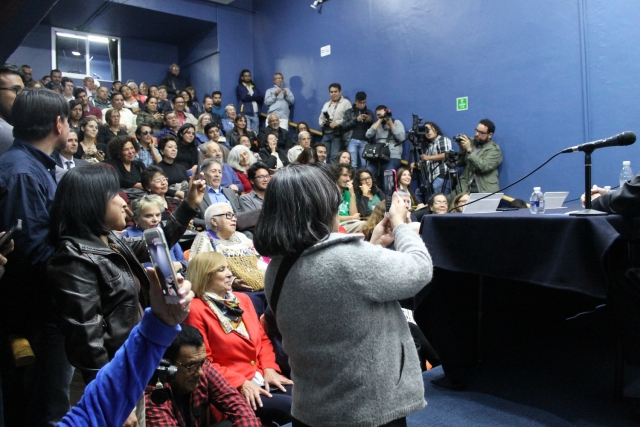 Alan went on to justify his assertion by pointing out that it was extremely difficult to write a novel which was at the same time a good work of literature and an accurate and truthful account of historical events. This feat had been achieved by Leonardo Padura.

Alan said: “When I started to read this book I found I could not put it down. It was gripping from the first page to the last. The author was clearly someone well acquainted with the style of detective novels.  But here we have a paradox.

“This can only be done by concentrating on the psychological drama of the individual characters. This was done by Dostoyevsky in his Crime and Punishment. And I believe it is possible to compare these two great works.” 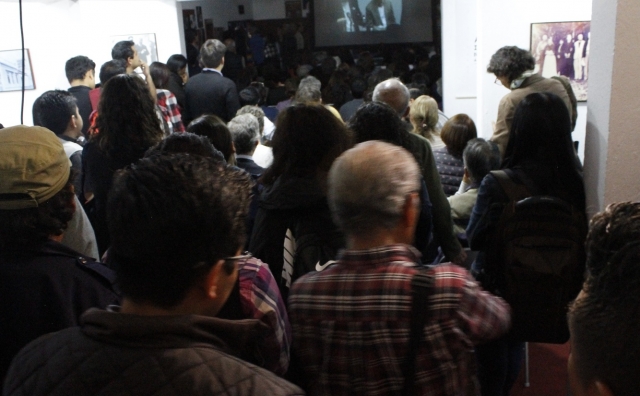 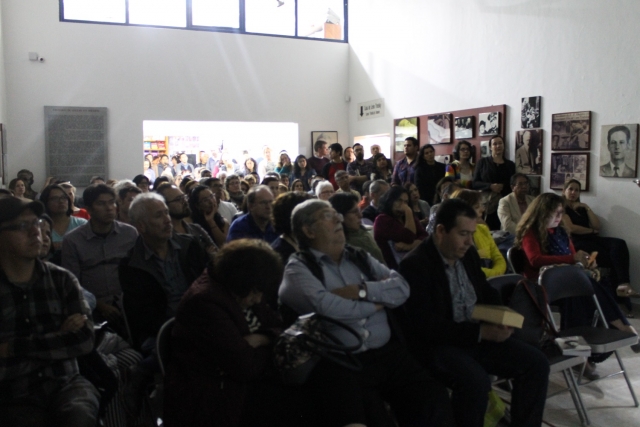 Having dealt with the literary aspect, Alan then proceeded to deal with the subject matter, particularly the meaning of Trotsky’s last battle:

“Some superficial writers, like Isaac Deutscher, have tried to belittle the last period of his life in comparison with his earlier achievements. But that was not the view of Trotsky himself who wrote in his Diary in Exile that this period was the most important in his life, a period in which his work was absolutely indispensable.”

Alan explained that Trotsky was not struggling for power, as some have tried to claim, but to preserve the spotless traditions and ideas of October, of workers democracy and proletarian internationalism:

“And that battle he won, although at the cost of his life. Who now speaks of Stalin the Great Leader? His name is spattered with blood and mud, while the ideas of Trotsky are more relevant and essential today than ever.” 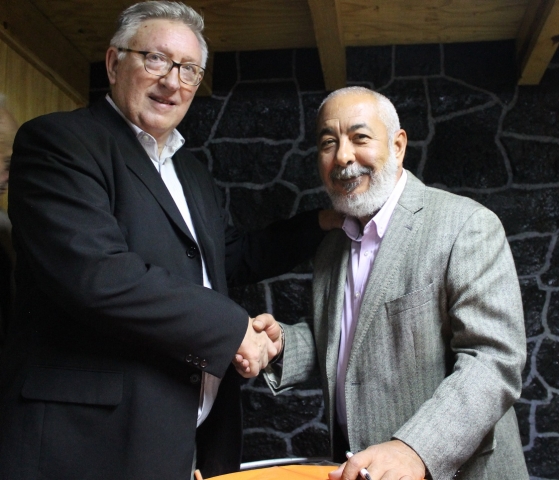 These words were met by spirited applause.

The last speaker of the day was Esteban Volkov, who addressed the meeting with a strong and vibrant voice that belied his years. He vigorously defended the ideas of Trotsky, attacked the Stalinist falsification of history and pointed to socialism as the only way out of the morass of capitalist crisis. 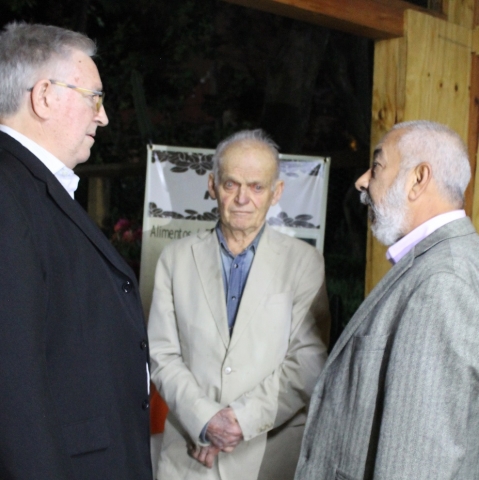 He recalled how the late Celia Hart had spoken very well of the novel The Man Who Loved Dogs but could not imagine then the enormous impact and extraordinary reception, resonance and historical importance it would have. Seldom has such an appreciative opinion about a novel been heard. Esteban Volkov, who lived as a child in that house on Vienna Street in Coyoacan, said that regardless of the literary importance of the book, Leonardo Padura shows us that it is possible to re-establish the truth about the past which had been so mutilated and distorted. "Yes, you can give life to the past!" he said. He remembered how his grandfather in that house responded to his adversaries whom he knew very well. Esteban Volkov concluded with these words:

"It is a very worthy and dignified work that Leonardo Padura has carried out: to have helped to restore the historical memory of one of the most important events in contemporary history such as the Bolshevik revolution of October 1917, reestablishing the role, together with Lenin, of one of its main protagonists, the Russian revolutionary, Leon Trotsky who was killed in this very place where we are gathered today, by Joseph Stalin on August 20, 1940.”

When Esteban had finished his emotional speech, the audience was silent for a moment, then burst into applause. It was a sincere tribute to the man who has done so much to keep the memory of Trotsky and his ideas alive for over seven decades.

Owing to the lack of time and the need for Leonardo Padura to sign books, there was no possibility to continue with a session of questions. A long queue immediately formed of people eager to obtain the signature of the author of The Man who Loved Dogs. Wine and snacks were served in the garden where many excited people, young and old continued to discuss what had been a most memorable evening.