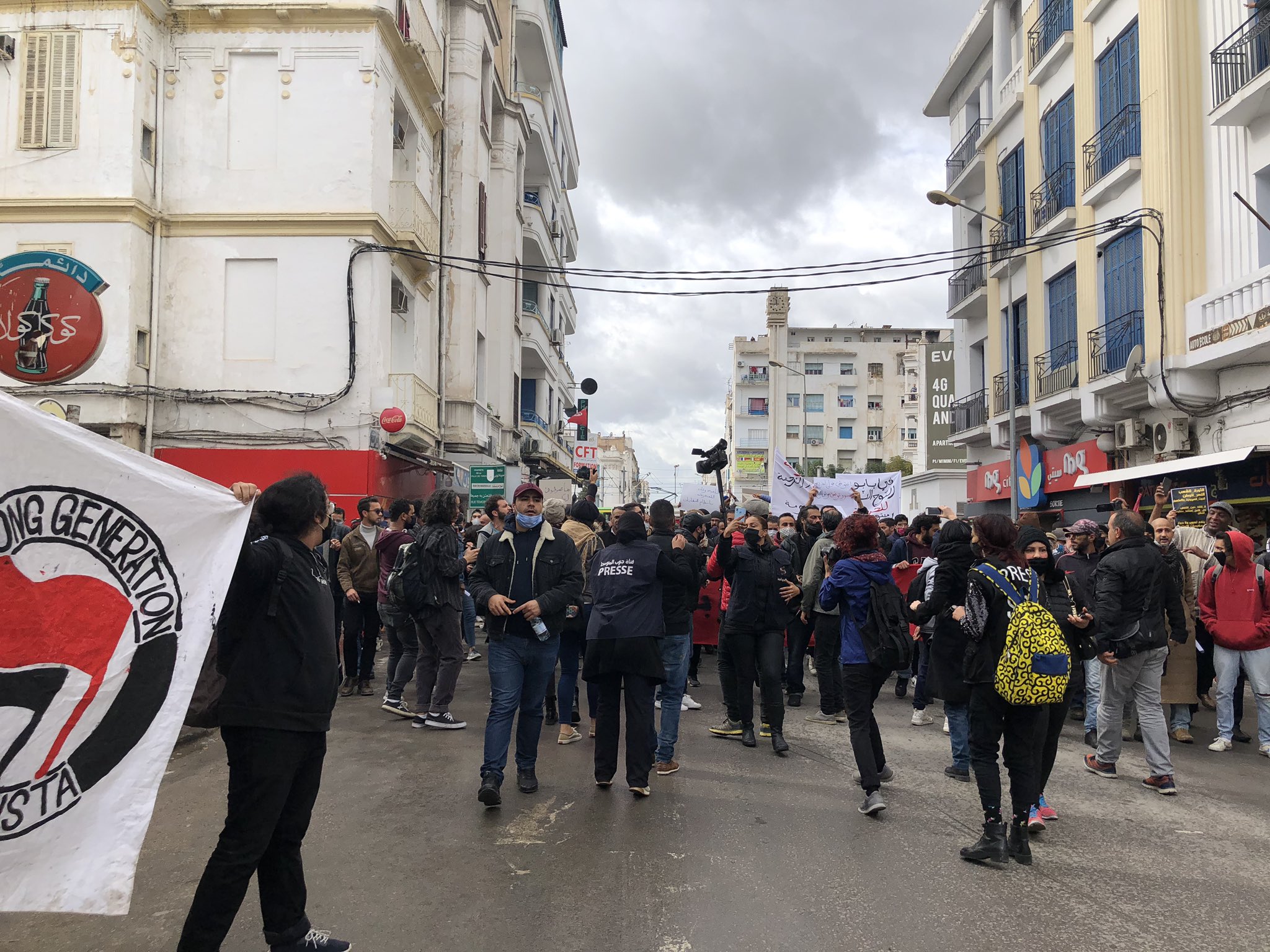 A new, powerful mass movement has erupted in Tunisia. The explosion of anger is due to the economic crisis, which has degraded the lives of Tunisians to a life of poverty and suffering. Exactly 10 years after the 2011 revolution that toppled Ben Ali, none of the problems of the Tunisian masses have been solved.

For weeks, a wave of anti-government protests has engulfed Tunisia, in what has been called a political uprising. In working-class areas in the cities, and in poor regions, the youth have taken to the streets, demanding economic and political changes, and clashing with the state security forces.

The movement erupted on 15 Friday in Siliana, a small farming town 130 kilometres from the capital Tunis. The protests ignited following a video circulating of a police officer assaulting an unfortunate shepherd whose sheep accidentally entered the courtyard of a governmental building. This act of injustice was the straw that broke the camel's back for the youth, not only in Siliana but likewise in the rest of the country. Protests rapidly spread to Tunis and 14 other cities, especially in the centre and south of the country, which suffers from high levels of poverty and youth unemployment.

Protests erupted in Tunisia after the 10th anniversary of the Arab Spring revolution https://t.co/2RLYerjqJw pic.twitter.com/HwLZhrWWGv

The protest movement does not appear to have a clearly established leadership or programme, but common to all of them is a demand for basic improvements: jobs, improved public services and an end to police violence. All quite modest demands. The youth have endured years of economic depression and humiliation at the hands of the state, and now find themselves left with no other option than to take to the streets once more. The government, basing itself on and defending a capitalist system in terminal decline, is both unwilling and unable to meet any of the fair demands of the protestors.

Tunisian capitalism was already in a state of crisis, many years before the coronavirus. Frustration has been accumulating due to falling living standards and constant cuts to public spending dictated by an IMF-backed loan program. The coronavirus further worsened the situation, as tourism, the most important sector of the Tunisian economy, took a dive. Tunisian GDP thus shrank by 9 percent in 2020. The ruling class has placed the full burden of this crisis on the shoulders of the masses.

For months, the economic situation in the country has been deteriorating rapidly. Unemployment among 15- to 24-year-olds has reached 36 percent, and the desperate situation has caused many youths to migrate. In 2020, 12,883 migrants were reported as having arrived in Italy from Tunisia, this was up from 2,654 in 2019! The youth are being condemned to choose between a life in poverty in Tunisia or leaving everything behind and risking their lives in order to cross the Mediterranean sea. This grim prospect is the best capitalism can offer the Tunisian youth.

The Tunisian government has reacted to the protests with the brute force of repression and by trying to discredit the movement. After five days of protests, on 19 January, Prime Minister Hichem Mechichi addressed the nation, on television, by offering the protesters his understanding meanwhile stressing that “We reject anarchy and we will enforce the law”. The actions of the state do however not indicate that there is much sympathy for the demands of the protesters. On the other hand, law and order, as promised, has been enforced plentifully. Numerous videos and footage has emerged showing police forces beating and assaulting peaceful protesters. More than 1,000 protesters have been arrested, most between the age of 15-20, and in many working-class areas, the military has been deployed to assist the police to quell the protests. On Monday the 18th the National Guard were, for instance, patrolling the streets of Hay Tadhamon, one of the biggest working-class areas of Tunis, with armoured vehicles.

In a typical display of the elite’s arrogant indifference towards the masses, the ministry spokesman Khaled Hayouni refused to refer to the detained people as protesters, but instead vilified them as people engaged with “criminal acts and looting”. The government and the Tunisian media has actively attempted to discredit and isolate the movement from the rest of the working class, by ignoring the demands of the protesters and instead focus on the violent clashes between protesters and security forces, and examples of looting. This is much, coming from a state official who is no doubt deeply involved in looting the coffers of the state and the pockets of ordinary people. And in any case, the looting that he refers to is an understandable by-product of protests taking place in a context of poverty, hunger and social desperation. The policies of the government, which puts the profits of the capitalists before the needs of the people, bear the true responsibility for whatever looting takes place.

President Kais Saied also clearly illustrated where the priorities of the government lie, by calling for the protesters to go home and to refrain from targeting property. As representatives of the capitalists, the government has no intention to address the burning issues of the masses, but is instead concerned with protecting the private property of their masters.

The new mass movement coincides with the 10-year anniversary of the revolution that overthrew the despot Ben Ali. His flight from the country on 14 January 2011 sparked a wave of revolutionary movements that swept across the Middle East and North Africa. The Tunisian government, having betrayed the hopes of the masses, had hoped to avoid the commemoration of the 2011 revolution. The government could feel the ground shake underneath its feet and feared that the commemoration might spark off a generalised movement. They therefore imposed a four-day national lockdown to run from Thursday the 14th to Monday the 18th.

This manoeuvre, however, did not prevent the suppressed anger of the masses from reaching the surface. Immense anger and frustration has been building up for years, and sooner or later it will find an outlet. During the first 10 months of 2020 alone, more than 6,500 protests were recorded. Protests that all were against the government’s economic and social policies. Voter turnout also indicates that the masses have rejected the political elite: in 2014 the turnout was 68 percent and by 2019 it had dwindled to a meagre 42 percent! The legitimacy of the system is clearly at a low place.

In the 2011 revolution, the Tunisian working class won important democratic rights, such as freedom of speech and bourgeois parliamentarism, rights that provided the Tunisian masses with new channels to develop their struggles. These democratic rights, however, remain limited, as long as the capitalist system remains intact. Tunisian capitalism is too fragile and its ruling class too weak and dependent on foreign capital, to be able to grant the masses any substantial concessions. Tunisian capitalism can neither afford economic concessions nor genuine democratic rights to the masses.

The youth and workers succeed in toppling Ben Ali in 2011: an inspiring achievement for the oppressed masses in the region and the rest of the world. However, while overthrowing the dictator and his nearest cronies, the economy and the state apparatus remained in the hands of the capitalist class. Thus, the material contradictions, which created the revolution in 2011, remain intact. The social and economic problems remain unsolved.

The Tunisian masses are therefore now, once more, forced to move in order to change their lives and the society around them. The experiences from the 2011 revolution show that, only by targeting the root cause of all their problems, the capitalist system, can the workers and youth change society in accordance with the interest of the majority.

10 years have passed since the 2011 revolution, and the fundamental problems of life for the masses in the Middle East and North Africa remain unsolved. As a protester told a reporter: “The whole system must go... We will return to the streets and we will regain our rights and our dignity that a corrupt elite seized after the revolution,” A new generation of youth are now moving into struggle. This new generation has inherited the lessons of the 2011 revolution, and a future revolution will therefore not be a repetition of the previous one, but will be on a higher level.

A decade after mass protests toppled Tunisia's long-time president and sparked uprisings across the Middle East, anger is boiling over again amid economic stagnation, the global pandemic and a widening disconnect between people and their leaders https://t.co/UP50t6YnM9 pic.twitter.com/aUzvMP1UwT

Even though the youth can play an important revolutionary role, they need the link up with the working class, the class who through its role in production holds the economic power in society. If the working class participate in the movement with its own means of struggle, by striking and factory occupations, it will leave the government floating in thin air.

The experiences of the 2011 revolution show that cosmetic changes to the state are insufficient. It is necessary to overthrow the very economic foundation of society; the capitalist system. Only by the workers and youth taking the political and economic power of society into their own hands, and beginning to restructure society on socialist lines, can the interests of the majority be satisfied and a truly democratic society be created. Only through the struggle for socialism can the impasse of the current system be ended.