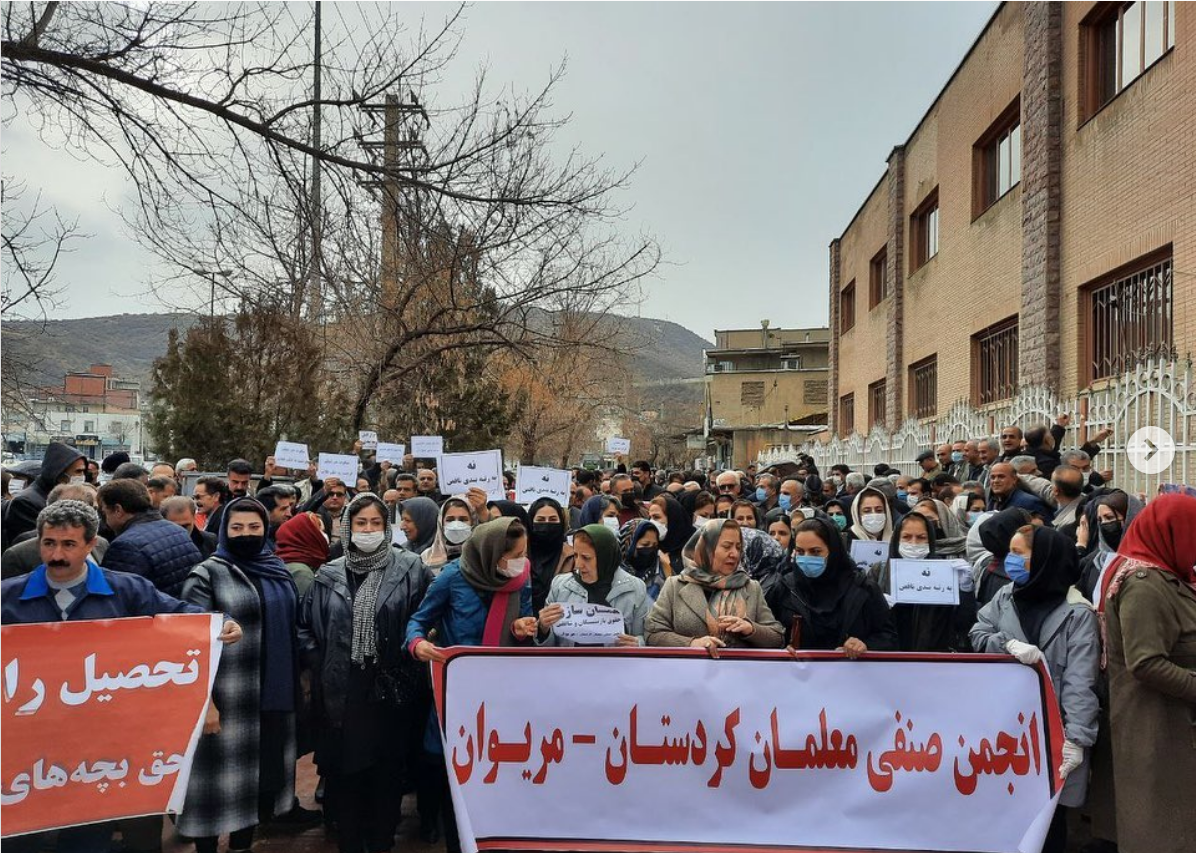 This month has seen a relentless series of over 230 strikes and protests in Iran. The most prominent of these was a two-day teachers’ strike on 11-13 December, involving tens of thousands of teachers in hundreds of cities across the country. The regime responded by arresting over 200 teachers and trade unionists.

Meanwhile, sporadic strikes continue among miners, with workers of the Sangun copper mines in Varzaqan county organising an occupation after months of broken promises from the bosses.

These are only the latest instances of a wave of strikes and protests that has been ongoing since 2018. Rather than being cowed, workers are only being further emboldened by the repression of the regime, which is mired in a state of growing crisis.

Since the beginning of the autumn, termly employed teachers have organised at least six national protests. These developed spontaneously, with demands such as a living wage, full-time contracts, COVID-19 safety measures, and quality free education for all.

Eventually, these protests united behind the Coordination Council of Iranian Teachers’ Trade Union confederation, which organised rank-file teachers and the most radical trade unionists, including activists from a number of regime-led trade unions, under a common programme of demands. These include:

Ignored by the government, which instead has presented an austerity budget for the upcoming year, the coordination council called for a strike during the next session of parliament. Slogans at their rallies and picket lines included: “the teacher is awake and hates discrimination”, and: “A living wage, striking, assembly and organisation are unalienable rights!”

Immediately, 43 workers’ organisations made statements in solidarity with the teachers. The regime, which previously tolerated the Coordination Council of Iranian Teachers’ Trade Unions, quickly cracked down on them, arresting leading figures, with over 100 confirmed arrests during the strike, on charges of disturbing civil order.

The regime is rightly fearful of the coordinating council. The recent strike was the best-organised national strike since the new outbreak of the class struggle in 2018. Unlike the national oil workers’ strike in July-August 2021, which spread spontaneously, the teachers’ coordinating council campaigned to win over teachers across the country, including those from regime-led workers’ organisations.

These methods are the way forward for the burgeoning Iranian labour movement. Future struggles must encompass the whole working class, directed against the regime, to be successful. In isolation, the regime can always sabotage independent workers’ organisations and arrest leading trade unionists.

While the coordinating council consistently claims that they aren’t political, and that political demands don’t belong at their rallies, this makes no difference to the Islamic Republic. As far as the regime is concerned, the economic struggle alone is an existential threat.

The miners at Sangun in the Varzaqan county of East Azerbaijan Province, Iran’s largest copper mine, which accounts for 20 percent of the country's copper production, went on strike on 4 December. This was following months of workers waiting for promised concessions from strikes on 5-8 October and 13-20 November.

These include: payment of unpaid wages, renewal of insurance, the abolition of differences between contracted workers and directly employed workers, and the reinstatement of all fired workers. Instead, the employers, who are tied to Islamic Revolutionary Guard Corps (IRGC), used this respite to blacklist 60 militant workers and even have three arrested for “disturbing civil order”.

On 2 December, the workers responded by blocking the managers from coming to the workplace and holding protests. Things reached a breaking point, and after it became clear that none of the concessions would materialise, the strike was resumed.

On 4 December, 2,000 miners - over half of the workforce - marched to the mines, blocking the roads with trucks and machinery. Quickly, the miners refounded their strike committee, not trusting the Islamic workers’ council. The strike committee called for 1,000 workers to occupy the mines, fearing the security forces would be called to quell the strike, as has happened to other miners’ strikes recently. The miners were correct. On 10 December, counter-insurgency forces surrounded the mines, beginning what was, in effect, a siege.

The Islamic trade union described the occupation as an “overreaction”, and called for “patience” and negotiations between the security forces and the employers. The strike committee answered: “the state and the rich are united, the Islamic trade union are their servants. There will be no talks until we get what we are promised”.

Miners of Sangun have undergone leaps of consciousness in a matter of months! The October strike was dominated by the Islamic workers’ council, yet two months later the workers rejected this body completely.

Despite this militancy, the isolation of the miners’ workplace occupation led to them being forced to end their action on 12 December. This was followed by a campaign of arrests and layoffs. The exact numbers affected are unknown.

Sporadic strikes and protests of oil workers have broken out continuously since their national strike in July-August died down. This strike was led by the workers’ organising council, which called for the formation of a strike committee to free themselves from the regime-led workers’ organisations.

Despite the existence of the independent strike committee, the regime was able to sow confusion by feeding promises through the Ministry of Energy and the Islamic workers’ organisations, which eventually brought an end to the national strike. By September, the strike was isolated to a handful of workplaces in Khuzestan in Abadan, Mahshahr, Assaluyeh and Bushehr.

It became clear to a growing layer of oil workers that the regime's promises were empty. One-day strikes and protests continue across Khuzestan, demanding: the payment of unpaid wages, renewal insurance, full-time contracts, rehiring of blacklisted workers, 10 days off monthly after 20 days work, and a 12 million toman minimum wage. All these demands come from the national strike, showing the enormous authority and influence that the organising council continues to have.

At the same time, the regime used the end of the national strike to blacklist and even arrest radical workers, especially those linked to the organising council. The regime, fearful of the sway of the organising committee, tried to impose Islamic workers’ councils upon the workers, which were met by a call for a boycott. In Ilam, only 113 petrochemical workers out of thousands participated in the formation of this committee, forcing the regime to give up in embarrassment.

It is only a matter of time until a new national strike of the oil workers breaks out. It is necessary for oil workers to unite their struggle with the rest of the working class in a common fight against the capitalists.

The bankruptcy of the Islamic Republic!

For the past three years, the Islamic Republic has faced an unprecedented wave of strikes, protests and even three uprisings. Moreover, the July 2021 presidential elections were met with a massive boycott. All this shows the revolutionary mood rapidly developing in society.

But the movement faces an obstacle: the lack of bold leadership. Without national, independent working-class organisations, these struggles were doomed to become isolated, and were swiftly suppressed.

The regime has also used the lack of leadership to sow confusion among the workers, especially via the regime-led workers’ organisations.

However, the regime is also backed into a corner by US-led sanctions, with negotiations seemingly going nowhere. Appeals to national unity and Islam have long ceased to have any effect. The regime likewise cannot continue printing money to fund its budget deficit, with inflation already at over 60 percent.

Instead, the government proposed an austerity budget for the next Iranian year (March 2021 - March 2022), cutting 18 percent from the previous budget. With the regime running out of foreign currency, subsidies for the import of basic goods will be halved, with soaring inflation expected. The retirement age will be raised and pensions will decrease. The minimum wage is to be abolished in rural areas. It is clear that this is an onslaught against the working class.

Aside from cuts, the government deficit is to be eliminated by a 63 percent increase in taxation, and continued privatisations. It will not be the capitalists paying; tax evasion is over 100 thousands billion tomans a year, a third of the state budget. It will be the already impoverished middle class, workers and farmers paying.

The Iranian masses have already been pushed to the brink of starvation. Even according to official figures, two-thirds of the population lives under the poverty line. Already, 30 trade unions have made a joint statement against the budget, describing it as an attempt “to further cheapen labour and drain more blood from the working class, and the rest of the toiling masses, to feed the parasitic capitalists”. They have said that they “will not remain silent if [the budget] is approved.”

The regime is fully aware of the social upheaval that is on the horizon, and has prepared accordingly. The funding of the Iranian Revolutionary (read ‘counterrevolutionary’) Guard Corps (IRGC) has increased twofold. Additionally, the civilian police are to be reorganised, integrating the IRGC and Basij (paramilitary force) into the police.

This is all in preparation for inevitable class struggle, as the regime knows the Islamic Republic has nothing to offer the masses but misery without end.

It is necessary for the working class to also prepare politically and build its organisations. The national teachers’ strike is just the beginning. The regime’s new offensive threatens national uprisings, and even a general strike in the near future.

For a national workers’ organisation!

The four major uprisings since 2018 have all failed. The latest, beginning in August in Khuzestan, was crushed despite massive support across the country.

On 25-26 November, farmers' protests in Isfahan were rapidly developing in the direction of an uprising, gathering support from workers (and particularly youth) across the country, as well as from various labour organisations. But the protests lacked leadership, so the regime swiftly crushed the movement, arresting over 300 protesters.

The regime is fully aware that it is nearly completely discredited and only remains in power through suppression and the lack of a working-class leadership. In part, this lack of leadership was inevitable after more than 40 years of dictatorship, but independent workers’ organisations and campaigns have already rapidly developed across the country.

The evolution of the teachers’ protests into a national movement led by the Coordination Council of Iranian Teachers, as well as the rejection of the regime-led labour organisation by oil workers in Khuzestan, are enormous steps forward. While these developments are important in the present situation, in order to fulfil any economic demands, a political struggle is needed, encompassing the whole working class, directed against the regime.

Already, discontent is simmering across the country. For this revolutionary potential in Iran to be realised, it is necessary to forge a leadership from the separate strikes and protests across the country into national mass movement, basing itself on a general programme of demands.

Such a programme would include common economic demands such as: the reversal of all austerity measures; living wages and pensions that increase with inflation; an extensive programme of public works to repair and develop the country’s crumbling infrastructure; the renationalisation of all privatised companies under workers’ control; and the introduction of workers’ control throughout the state-owned economy. It must also include political demands, including the right to strike, protest and assemble, as well as a call to abolish the Islamic Republic.

Until a national leadership develops that is capable of prosecuting the struggle for this programme, the strikes and protests will either die out, be lulled by empty promises, or be crushed by repression, only to return larger and more emboldened at a later date.

The Iranian working class has rebuilt its organisations many times over, and is doing so once again. Only once a national leadership for the future Iranian revolution is formed can Iranian capitalism and its regime, the Islamic Republic, be brought down!