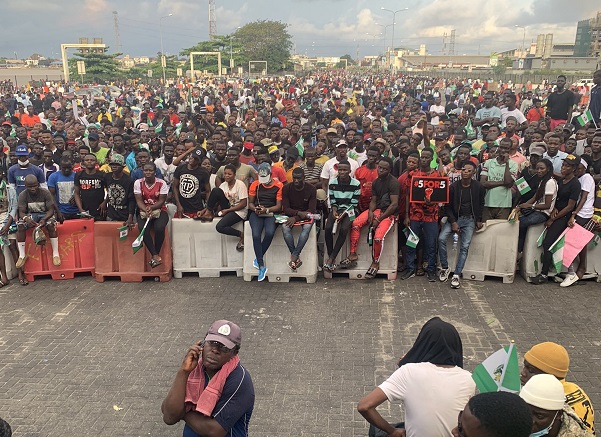 The youth of Nigeria have risen up in revolt against the brutality of the hated SARS police unit. Neither concessions nor the whip of reaction have beaten the #EndSARS movement back, but only driven it forward. This spontaneous outpouring of rage must be put on an organised political footing, aimed squarely at the rotten capitalist regime.

On 3 October 2020, about 4.19pm Nigerian time, a person on twitter, calling himself Chinyelug, with just 800 followers, tweeted the following:

SARS just shot a young boy dead at Ughelli, Delta state as we speak. In front of Wetland hotels. They left him for dead on the road side and drove away with the deceased Lexus jeep.

In just a few minutes, the tweet received over 10,000 retweets. Chinyelug never knew he was triggering one of the biggest youth movements in the history of Nigeria. He never knew that he was just dropping the last straw that has now finally broken the camel’s back, just as the killing of Mohammed Bouazizi was the last straw that triggered the Tunisian Revolution that later became the Arab Spring in 2011.

The killing at Ughelli, reported by this tweeter, was one of thousands of other murders committed by SARS (the Special Anti-Robbery Squad) that have occurred without any repercussions. Youth between the ages of 15 to 35 are particularly targeted. They get constantly harassed for things as trivial and ordinary as plaiting their hair. Worst of all is if they’re found in possession of expensive phones, or driving luxurious cars.

UNESCO Education for All Global Monitoring Report said that Nigeria accounted for almost a fifth of the world’s out-of-school children, and one of the world's highest school drop-out rates, but the answer to this by the Nigerian ruling elite is to criminalise a whole generation of young people. They are all suspected members of being so-called Yahoo Yahoo boys: meaning internet fraudsters (the majority of whom are the unfortunate victims of the crisis of capitalism). With exclusive power to arrest or even kill without explanation, SARS evolved to become much more dreaded by the people than the armed robbers it was set up to fight. It extorts, kills and arrests without any recourse to rules or regulations. But the killing in Ughelli was one step too far.

The strengths and weakness of leaderless spontaneous movements

Lagos, as the commercial centre of Nigeria, was the first place where youths came out onto the streets. The movement declared itself leaderless, and who could we have pointed to initially as the leader of this magnificent struggle? It was triggered by an accident, but dialectics teaches that sometimes “necessity expresses itself in the form of accident”. What we are seeing is a material confirmation of this dialectical lesson.

Nigerian Government has unlocked the point of no return!

This is Okigwe Road, Aba.

The movement announced itself to the world under the hashtag #ENDSARS, and by 9 October, #ENDSARS had topped the trending tweet worldwide. It innocently claimed to reject all forms of political demands: it wanted just one thing: “the end of the SARS”. An informal rule of joining the rallies is there can be no distribution of leaflets and no displaying of any political banners. Those who went to rally with leaflets were chased away. No one can directly or indirectly be associated with politics. This, of course, is not accidental but dictated by long standing experience of the politics of capitalism, dominated by extreme levels of corruption, stealing, embezzlement and the pursuit of private interests. The participants have not experienced any other forms of politics (meaning revolutionary politics) in their lifetimes. This is striking proof of the assertion that “the masses learn not from books but from experience of their daily lives”.

A spontaneous movement of this magnitude, that has no clear central leadership, has its advantages, but also big disadvantages. The government searched in vain to find the leader to negotiate with, but none was found. Many accidental leaders were called up for negotiation, but rather than this quelling the movement, it only poured petrol to the fire. The movement kept expanding as no one had strong enough authority to put the fire out. The government immediately announced the banning of SARS units nationwide and promised to compensate all the victims of the injustices by SARS, but also announced the formation of another police unit, SWAT, as its replacement. This is all a case of too little, too late. Rather slowing down the movement, the masses only felt more confident of their powers and their demands rapidly advanced, eventually becoming political. From #ENDSARS, the slogan became #ENDSWAT and #ENDBADGOVERNANCE.

The movement later spread to over 20 cities in the country, especially in the south. Abuja, Kaduna, Minna, Makurdi, Kano and Jos in the north later caught up with this festival of the oppressed.

Despite these amazing advancements, a movement without any form of leadership also has its internal weakness. It will be incapable of confronting the well-organised state and its systems of repression. There was no coherent position on which to mobilise and direct the movement.

The protest put the Nigerian Police Force on the defensive, as the protest is directed mainly at their excesses. This made it difficult for the government to use the police against the movement. They later resorted to using thugs to attack peaceful protesters. In almost all the centres of protest, armed thugs with the active support of State Security Services were deployed to attack the youths. The situation in Abuja was particularly bad, with over 200 cars protesters burned and about five lives lost from both sides. This still proved incapable of putting down the movement. The government announced that all the police officers found culpable are to be sacked, while some with minor offences being met with reprimands. This also obviously came too late and too little.

On 20 October, the regime, out of desperation, played its last card in Lagos. Soldiers were drafted in to violently put down the protest. Earlier in the day, the Lagos state government announced a 24-hour curfew, starting from 4pm. It was later shifted to commence at 9pm the same day, because it was obvious that protesters were not going to leave the public rally. A video went viral of soldiers in Ikeja (the first main converging centre of the rally in Lagos) fraternising with the protesters and singing songs of solidarity along with them.

It was about 7pm in the evening that the news broke of the organised massacre of the protesters at the Lekki toll-gate: the second main center of the rally. It was a well-orchestrated attack. The CCTV was first disabled about an hour before, the lights were also turned off, and then the soldiers started opening fire on the peaceful protesters. This revealed the extent of the crude brutality of the Nigerian ruling elite. About 15 people were reportedly killed immediately and almost 100 suffered one degree of injury or the other.

But the whip of counter-revolution has only succeeded in spurring on the movement. The reaction was immediate. The multi-million Naira Lekki toll-gate, that purportedly raked in billions of Naira monthly, was completely burned down. Oriental Hotels belonging to the former Governor of Lagos state and stalwart of the ruling party, Bola Tinubu, were reportedly attacked. Almost 100 big urban buses belonging to the government went up in flames. The current governor's family home, where his mother resides, was torched. TVC (a television network, also linked to Tinubu) was burned down. Enforcing a curfew is now impossible, and the masses’ rage has become uncontrollable. It is even reported that Tinubu himself fled the country in the early hours of today (21 October).

There is really no way a movement of this magnitude will fail to create a visible crack within the ranks of the ruling elite. The plan initially was to drag in soldiers much earlier, but the top hierarchy of the military rejected the request. The anger within the army is much stronger than among the civilian masses. The reasons for this are obvious: the corruption of the generals, non-payment of appropriate allowances and continuing casualties at the hand of rag-tag Boko Haram terrorists. The National House of Assembly members directed the president to address the nation. This was probably the first time this particular house of assembly has publicly directed the president, in an attempt to absolve themselves from blame.

We will win this war 🇳🇬

What is to be done?

Marxists are opposed to rioting, looting and arson, but our opposition has nothing in common with the hypocritical objections of the ruling elite and their supporters. If you treat human beings like animals, they will act like animals; if treated like humans, they will respond accordingly. The real culprit is the ruling elite, and their system of oppression and exploitation, which reduces large layers of society to mere raw material for exploitation. For as long as a decent living is made legally impossible for the majority, a few of them will certainly attempt to solve the problem on an individualist, criminal basis. It is not for us to helplessly throw our hands up and condemn the rioting, but to find a way to reach the protesting youth.

Nigerian youth are struggling to find their way out of the blind alley that capitalism has condemned them to. Ours is to awaken the youth to political consciousness, and we are very confident that they will soon find out that rioting is a pointless blindly alley.

As Marxist activist and writer Alan Woods once said, regarding riots that broke out in Britain in 2011:

“The Marxists will not join with the bourgeoisie and its agents in their hypocritical chorus of denunciation. We will follow the sound advice of Spinoza: ‘Neither weep nor laugh, but understand.’ Our duty is to find a road to the youth, to help them to find the right road – the revolutionary road, the road to the socialist reconstruction of society.”