Share
Tweet
Yesterday the Spanish Student Union, Sindicato de Estudiantes, called a student general strike involving school and university students. The turnout as massive, with hundreds of thousands coming out to protest against cuts in education and privatisation. 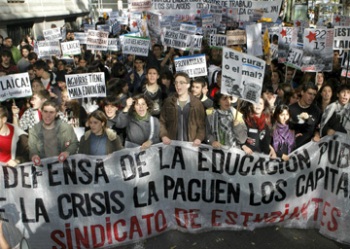 Today, November 13th, hundreds of thousands of students in secondary and university education supported the general strike called by the Spanish Students’ Union (Sindicato Estudiantes). The turnout was 90% from the 3rd year of the ESO in state colleges and 75% in the state universities. Tens of thousands of students took part in more than 60 demonstrations and rallies across the country. The vast majority of high school and university students responded to the call of the Spanish Students’ Union.

The largest demonstration took place in Barcelona with 70,000 students and teachers, as in Catalonia the workers’ unions USTEC and CGT also called a strike of the teachers in schools and colleges. In Madrid, about 30,000 students participated with a large presence of students from both high school and universities; 5000 students took to the streets in Seville and in Valencia; 2500 participated in Tarragona; 2000 in Granada and Zaragoza, 1500 in Malaga (despite the fact that the central government tried to ban the demonstration). In total there were rallies and demos in around 60 towns the length and breadth of the country, from Galicia to Murcia, to Aragon, Extremadura and the Canary Islands. 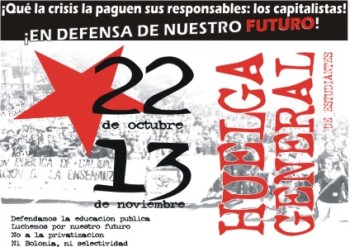 The mobilization was in defense of public education, for an end to the tightening up of selection procedures and an end to the Bologna Directive, which involves handing over university education to big capital and squeezing out working class children. It also raised the call that the crisis should not be paid by the workers’ children. There are already about three million workers unemployed and, while the government insists that there is no money for education or health services, it is giving away 150 billion euros to the bankers. The UGT and CCOO cannot continue to stand idly by; they must call an immediate 24-hour general strike in defense of public services and employment.

The ball is now in the government’s court. The students have shown their total opposition to the privatization of state education. We urge Mercedes Cabrera and Cristina Garmendia to listen to the students’ demands and completely reverse their policy: Stop being submissive to the big bankers and capitalists who responsible for the crisis, while at the same time being arrogant with young people and workers who suffer unemployment and job insecurity.