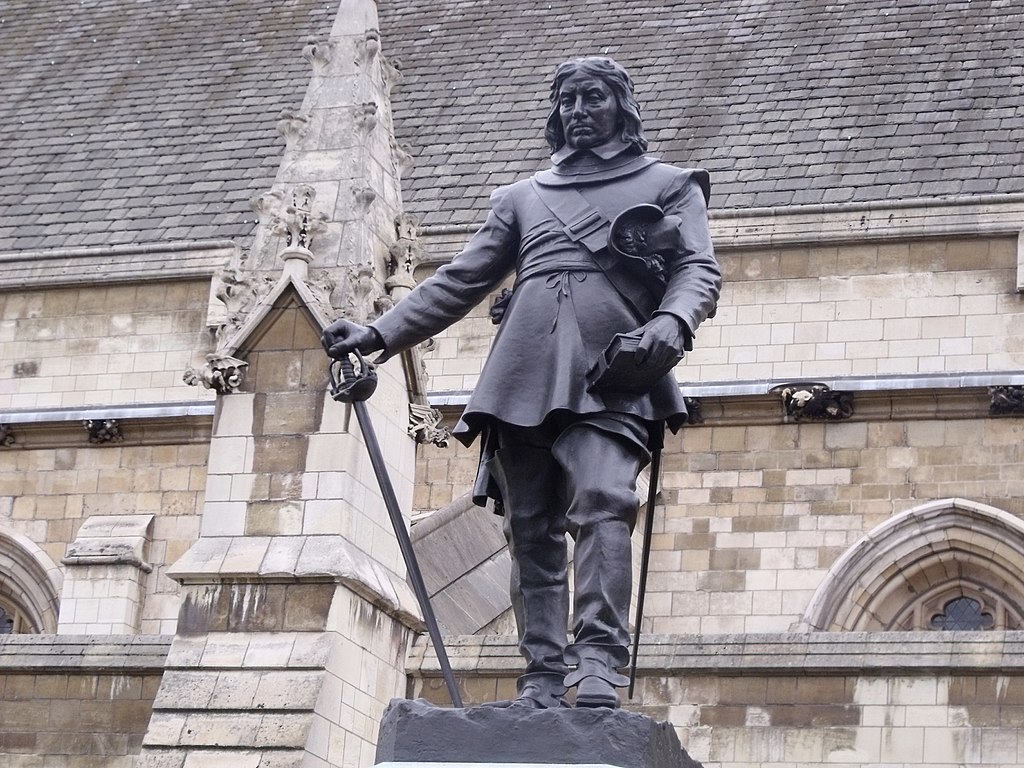 Today marks 350 years since the death of Oliver Cromwell, the outstanding leader of the English bourgeois revolution of the 1640s. Without him, with his steadfast courage and determination, the Revolution would have been betrayed by the big bourgeoisie who continually sought an accommodation with the Crown. It is no accident that Cromwell has been described as the Lenin of the English bourgeois revolution.

The English Revolution of 1640-60 was a great social overturn like the French Revolution of 1789. The old feudal regime was destroyed and replaced with a new capitalist social order. The Civil War was a class war which overthrew the despotism of Charles I and the reactionary feudal order that stood behind him. Parliament represented the new rising middle classes of town and country which challenged and defeated the old regime, cutting off the head of the king and abolishing the House of Lords in the process.

During the first part of the 17th century relations between the Crown and the bourgeoisie sharply deteriorated. Charles continually defended the Divine Right of Kings, while the Commons stood for the 'nation', its privileges and inherited rights. These bitter quarrels led invariably to the dissolution of parliaments and ended with the eleven-year lone rule of Charles I.

Charles succeeded in alienating the men of property with the imposition of taxes, forced loans and arbitrary government. Eventually the City of London went on strike and refused a loan. Meanwhile the Scottish army drove south and occupied Newcastle. Charles had no alternative but to again recall Parliament in November 1640. This was known as the Long Parliament, and sat with intermissions for the next twenty years. Within a little over a year, Parliament had split and the class struggle was carried through by Civil War. The fundamental issue was political power.

The conflict was expressed in religious terms, as both sides believed they were fighting God's battles on earth. However, religion represented something far wider than in today's terms. The Church was the main propaganda weapon of the crown. Bishops and priests acted as state functionaries. Under these circumstances, social conflicts and the class struggle expressed themselves as religious conflicts. We need to uncover the social content behind the theological arguments. By 1640, the church hierarchy and censorship collapsed, and radical millennarian sects emerged from underground.

"A very great part of the knights and gentlemen of England… adhered to the King", wrote the Puritan Baxter. "And most of the tenants of these gentlemen, and also most of the poorest of the people, whom the others call the rabble, did follow the gentry and were for the King. On the Parliament's side were (besides themselves) the smaller part (as some thoughts) of the gentry in most of the counties, and the greatest part of the tradesmen and freeholders and the middle sort of men, especially in those corporations and counties which depend on clothing and such manufactures."

Cromwell was of this Puritan "middling sort". He said of himself: "I was by birth a gentleman, living neither in any considerable height, nor yet in obscurity". He entered Parliament in 1626 representing Cambridge.

During the first stages of the civil war, Cromwell recognised the disastrous tactics being pursued by the Parliamentary leadership, the grandees. Parliament attempted to defeat the cavaliers by traditional feudal means, by calling out the feudal militia. They wanted the traditional Lords, men of birth, as army generals. Such methods nearly lost Parliament the civil war. A Royalist advance on London in 1643 was only stopped by the resistance of three ports and the citizens of London.
Cromwell swept away these weaknesses by applying revolutionary methods. This showed Cromwell's genius and far-sightedness. A revolutionary war requires revolutionary methods. In the areas under his command in the eastern counties promotion came by merit, not by blood and family titles.

"I had rather have a plain russet-coated captain," said Cromwell, "that knows what he fights for and loves what he knows, than that which you call 'a gentleman' and is nothing else." He insisted on his men having "the root of the matter" in them, and was tolerant of different religions. "Truly, I think he that prays best will fight best", he declared. "I had rather that Mahometanism were permitted amongst us than that one of God's children should be persecuted."

He instilled a revolutionary fervor into his troops, which gave them both courage and strength to face the enemy. "I will not cozen you by perplexed expressions in my commission about fighting for King and Parliament. If the King chanced to be in the body of the enemy, I would as soon discharge my pistol upon him as upon any private man; and if your conscience will not let you do the like, I advise you not to enlist yourselves under me."

In this way Cromwell was building not only an army but a party of the Revolution. In the words of the historian Macaulay: "But such was the intelligence, the gravity, and the self-command of the warriors whom Cromwell had trained that in their camp, a political organisation and a religious organisation could exist without destroying military organisation. The same men who, off duty, were noted as demagogues and field preachers, were distinguished by steadiness, by the spirit of order, and by prompt obedience on watch, on drill and on the field of battle. But in this camp alone the most rigid discipline was found in company with the fiercest enthusiasm. His troops moved to victory with the precision of machines, while burning with the wildest fanaticism of Crusaders."

Cromwell developed a contempt for the Lords who blocked his methods of recruitment. He despised those grandees who did not want to beat the King too thoroughly. "If we beat the King ninety and nine times, yet he is King still," said the Earl of Manchester, Cromwell's general. "My Lord," Cromwell replied, "If this be so, why did we take up arms at first?"

Cromwell appealed to the lower orders who were fired up with revolutionary zeal as the real shock troops of the English Revolution. The big bourgeoisie were more terrified of the lower orders than the King, and were desperate to come to a compromise. They held much property and were afraid they would lose it if things went too far. The bourgeoisie was a brake on its own Revolution. These Presbyterians stood for a limited monarchy, while Cromwell's Independents, the revolutionary petty bourgeoisie, stood for a Republic. As the civil war unfolded, the Independent party won greater support and displaced the Presbyterians from the leadership amongst the awakening petty-bourgeois masses in the town and countryside and formed the main driving force of the Revolution.

While the Presbyterians looked to compromise, Cromwell was able to impose his revolutionary authority after his great victory at Marston Moor in 1644. "It is now a time to speak or for ever to hold the tongue", he told Parliament, demanding a democratic reorganisation of the army as a precondition for defeating the Royalists. The "Self-Denying Ordinance" of 1645 effectively removed the aristocratic Presbyterian commanders and established the New Model Army open to all the talents and financed by a national tax. The army was transformed. As a consequence, the New Model Army, under Cromwell, imposed defeat after defeat on the Royalists, who were finally routed at Naseby in 1645.

Charles was seized by the Scots and sold to Parliament. The Presbyterians opened negotiations with Charles hoping to reach a compromise despite the Royalist defeat. They controlled Parliament and passed a resolution to disband the Army without proper provision. Those re-enlisted would be sent to Ireland. This caused rebellion in the Army led by the Levellers and the  Agitators in the New Model Army.
Levellers

The Levellers were a remarkable movement that demanded the establishment of democratic rights and a Republic. (For the Levellers see The English Civil War and the Levellers ) The Agitators were elected representatives of the rank and file in the Army.

Cromwell, who distrusted the political position of the Levellers, was forced to put himself at the head of this movement in order to contain it. The Army, under Leveller influence, marched on London. Cromwell’s discipline was only restored in the Army when news arrived that the King had escaped.

Once again, the Presbyterians wanted to negotiate with the King, hoping to isolate the unruly mob and Army. This time, with the backing of the Army, a purge of the House of Commons was carried out, putting power into the hands of the revolutionary petty bourgeoisie, the Independents. Again Cromwell showed his revolutionary contempt for authority. The execution of Charles I soon followed ("I tell you we will cut off his head with the crown on it") and the Republic was declared.

After resting on the left-wing to suppress the Royalists and Compromisers, Cromwell now rested on the propertied classes to carry through a purge of the extreme left-wing. The Republic stood on a very narrow social base. Cromwell dissolved the Long Parliament. "You are no Parliament… (pointing at the mace) What shall we do with this bauble? Here, take it away". "When they were dissolved, there was not so much as the barking of a dog". He was declared Lord Protector and the newly-formed revolutionary dictatorship rested on one man sitting on bayonets, surrounded by Royalist enemies at home and abroad. He had no alternative but to eliminate all obstacles to his historic mission.

"Different classes in different conditions and for different tasks find themselves compelled in particular and indeed, the most acute and critical periods in their history, to vest an extraordinary power and authority in such of their leaders as can carry forward their fundamental interests most sharply and fully", explained Trotsky. Cromwell's Protectorate was one such example. "For one era Oliver Cromwell, and for another, Robespierre expressed the historically progressive tendencies of development of bourgeois society."

By the time of Cromwell's death in 1658, the social basis of the revolution began to unwind. This prepared the way for the restoration in 1660. However, the Revolution had destroyed the old order. The constitutional monarchy could never turn back the clock. Pre-Cromwellian society could never be re-established by a Restoration. What is written by the sword of revolution could not be erased by the Restorationist pen.

Cromwell's historic task was to inflict the most shattering blow against the old feudal order. To carry out such a task, he rested on the most revolutionary layers in society. Under Cromwell, the Revolution acquired all the depth vital for this achievement. Such determination, dedication and courage are not only to be admired but such attributes need to be assimilated by today's new generation who wish to carry through the socialist revolution in Britain and internationally.