The Progressive Youth Alliance (PYA), a revolutionary organisation struggling for the rights of students and youth in Pakistan, is organising a nationwide protest, entitled “Day of Action”: for free education and the restoration of student unions; and against sexual harassment of women, state abductions and unemployment on 19 December.

On Saturday, youth and students will hold rallies for their demands in at least 31 cities of Pakistan. The major cities where the protests will be held include Lahore, Karachi, Islamabad, Multan, Hyderabad, Hunza-Gilgit, Peshawar, Mirpur Khas, Nawabshah, Larkana, Noshehro Feroze, Mitthi, Dadu, DG Khan, Faisalabad, Gujranwala, Quetta, Zhob and others.

PYA leader Fazeel Asghar from BZ University Multan has said that, though life was never easy in Pakistan for the working class – with no health or educational facilities; rife unemployment and terrorism; dilapidated physical infrastructure; state repression, rapes and sexual harassment – it has become even-more miserable since COVID-19 hit.

The living standards of the working class, youth and students have been drastically affected. Inflation has risen above 25 percent. Basic necessities of life are out of reach for the majority of people.

Worst of all, the unemployment trajectory is up, with no future prospects or job opportunities for the students in universities, or those who have recently graduated.

The rulers of Pakistan made no effort to solve these issues. Rather, they took this crisis as an opportunity to make even more money, following the maxim that “every disaster is an opportunity for the rich". 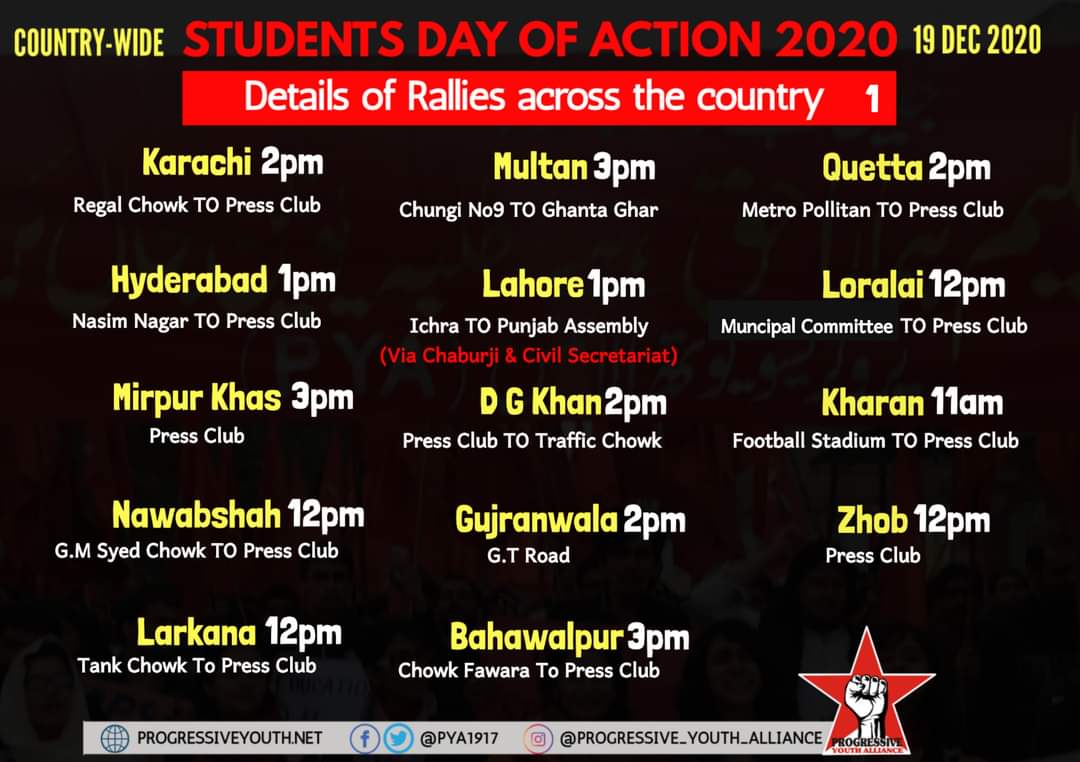 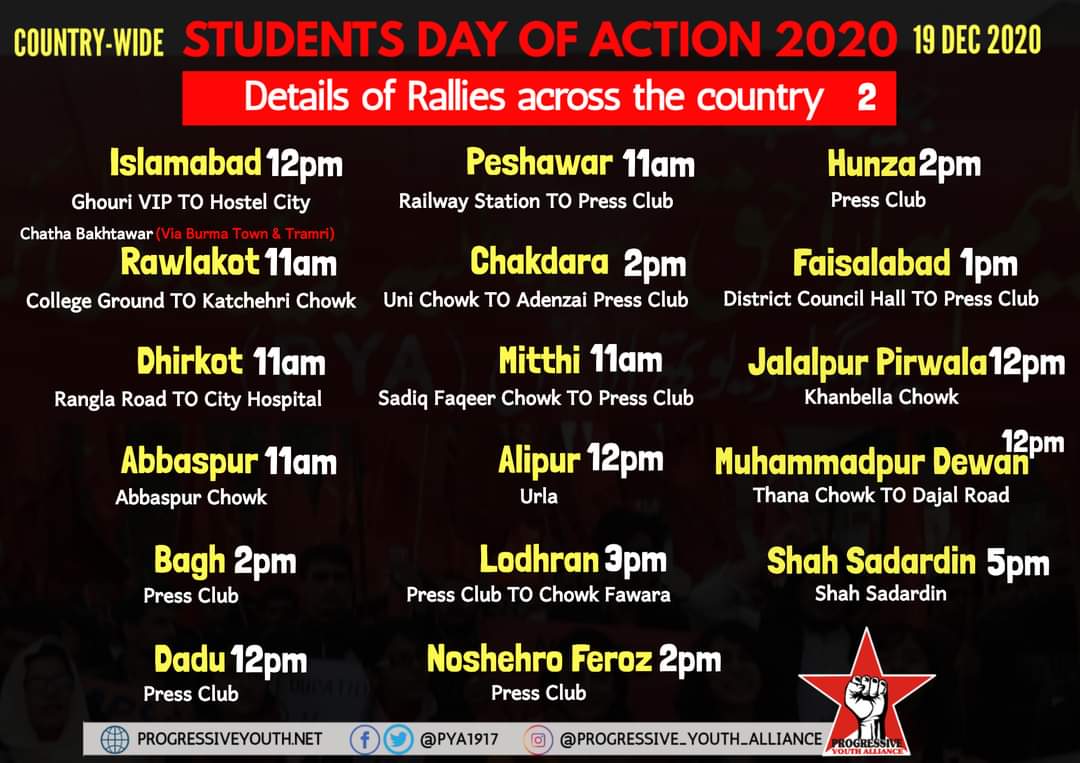 After the educational institutes were closed down owing to COVID-19, online education was introduced without provision of any alternative facilities, and without any consideration of students living in areas with no internet coverage.

Rai Asad, another PYA activist from Lahore, added that the decision to move to online education without providing basic facilities was meant only to bring huge sums of money into the pockets of private education bosses. Similarly, fees were collected forcibly from students by public institutions as well. Educational institutions were opened after a lockdown and then closed again, with the government stating that the cases of COVID-19 were surging. But in reality, these decisions were not made with COVID-19 in mind. Pressure from the youth was the main reason, as the ruling class feard a revolutionary mass movement of students across the country.

Adil Aziz, another PYA leader from Karachi, said that – sensing this worsening situation – the PYA leadership decided to mobilise working-class youth and students in every nook and cranny of the country against surging unemployment, costly education and enforced fee collection, sexual harassment, gender oppression, inflation, poverty, lack of healthcare, ban on student unions, the actions of the IMF and all other imperialist institutions, state repression and the anti-people politics of the ruling class.

For the last month-and-a-half, PYA members have been mobilising for the Day of Action by intervening in working-class neighbourhoods, as well as approaching vendors, shopkeepers, railway workers, steel mill workers, workers at the Pakistan Telecommunication Company Ltd. (PTCL), workers at the Water & Power Development Authority (WAPDA), post office workers, doctors, paramedics, teachers, unemployed youth and, of course, the students to organise them for the nationwide agitation.

Javeria Malik, another PYA activist from Quetta, demanded the government solve the issues that are endangering the lives of common people in Pakistan. She said that the PYA believe that the ruling class of Pakistan will never bother to make these issues their priority, as they are least affected by them, and in fact, are the beneficiaries of the brewing crisis. That is why the PYA is convinced of the necessity for working-class youth, students, workers and to organise into a revolutionary party to overthrow capitalism through a socialist revolution. This is the only way out of the present crisis. They are striving in that direction, and the Day of Action will be an important milestone.

The leaders of PYA also said that, on the Day of Action, they will raise their voices for the release of their comrade Amar Fayaz, who was abducted by the state authorities on 8 November. Since then, he has not been produced in any court or charged of any offence. Missing persons have become a widespread issue in Pakistan, especially among politicised workers of oppressed nationalities. The courts, police and other legal institutions across the country have become impotent, including the government and the army officers. Intelligence agencies are ruling the country with unlimited powers. In a recent speech, an opposition leader said that the whole national parliament is being controlled by direct orders from a colonel of Inter-Services Intelligence (ISI). This shows the real face of democracy and the government in this country.

All political parties, whether in power or in so-called opposition – not to mention the generals, judges, media barons and other members of the ruling class – are involved in widespread looting and plundering, while millions are living in extreme poverty. A poor man near Lahore killed his five children due to extreme poverty and hunger a few days ago by throwing them in a canal. Similar cases across the country have become routine news in the papers and on TV, while the elites live in extreme luxury. Most of the news is censored or is manipulated through the media in the country, which is under strict state control. This is why protests for missing persons or abductions, and similar crimes of the state authorities, never get into the news.

Glimmer of hope in the darkness

The capitalist system has become a nightmare for the millions of working class people in a country where protesting against injustice and crime have become the gravest offence.

In this situation, the Day of Action is a glimmer of hope for the working class. The campaign has got an overwhelming response by the students and workers across the country. Many workers’ organisations have supported this call and agreed to participate.

Thousands of workers are already protesting across the country against privatisation, lay offs, wage cuts and other issues. In last few months, tens of thousands of workers have come out on the roads to protest against the draconian attacks of the government, the likes of which have never been seen before. The government is now planning to end the state pension system, which is already only available for government employees. More attacks are being prepared as well, including massive taxation, job cuts and withdrawal of all health and education services provided by the government, which already reach only 10-20 percent of the population.

In this situation, the only way forward is a revolution. Nothing less than that will solve the burning issues facing the working class.