Share
Tweet
On Thursday, January 22rd, there was a successful inauguration of Dr. Lal Khan's new book, "Pakistan's Other Story - The 1968-69 Revolution" in London. Young and old, students and trade unionists, turned up to hear a panel of speakers including Zakir Hussain, Qayyum Butt, and Alan Woods who addressed the audience before Lal Khan spoke. (Including videos of the speeches)

On Thursday, January 22rd, there was a successful inauguration of Dr. Lal Khan's new book, "Pakistan's Other Story - The 1968-69 Revolution" in London. A crowd of 60 people, including a handful of participants in the 1968-69 revolution attended the event. Young and old, students and trade unionists, turned up to hear a panel of speakers including Zakir Hussain, Qayyum Butt, and Alan Woods who addressed the audience before Lal Khan spoke. 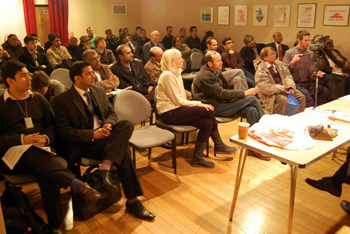 The meeting commenced with comrade Naeem Khan introducing the four speakers, followed by Zakir, the ex-leader of the Young Communists in Pakistan speaking about how much he enjoyed the book and how important it is to analyse the defeats of the past to be prepared for the battles of the future. He outlined especially the plight of the people living in Pukhtoonkwa Province on the border with Afghanistan.

Then, Qayyum Butt, a founding member and former deputy general secretary of the PPP spoke about his experience during the revolution and his subsequent exiling to Britain. He explained how Lal Khan, then in exile, was always very supportive and helped him in times of difficulty. He also praised the fact that Lal Khan was still struggling today. 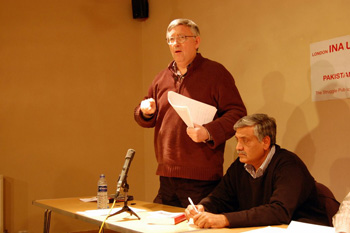 The third speaker was Alan Woods, the editor of www.marxist.com and political mentor to Lal Khan. Alan started out by saying that history is written by the victors. Using the example of the Spartacus uprising, he stated that the untold history is that of the oppressed masses. This is the importance of this book. It is the "Other Story," or in Alan's words, "The Real Story," the story of the workers and peasants of Pakistan rising up to change society. The year 1968 was a revolutionary year. From France, to Italy, to Mexico and to Pakistan, the masses, inspired by revolutionary events internationally, rose up to challenge the capitalist system. The only thing standing in their way was their own leaders. Even today, the so-called 'lefts' see only despair and counter-revolution. They fail to see to revolutionary yearning of the masses to change society.

With that, the floor was turned over to Dr. Lal Khan. He started by talking about the absolutely desperate conditions in Pakistan and the complete corruption and bankruptcy of every other political trend in the country. The fundamentalists are not as popular as the bourgeois press would have us believe. They are only present as a force because they are buoyed up by sections of the state apparatus and the ISI. The various nationalist groups in Pakistan are also no alternative and have become completely unpopular. They spend their time wining and dining with the representatives of US imperialism in a desperate ploy to gain some sort of share in power and plunder. 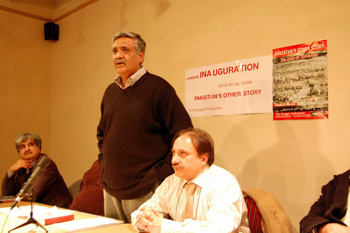 Lal Khan stated that the reason for writing this book was to draw the lessons from this attempt of the masses to change society and deliver them for the youth and workers of today to learn from so we do not repeat the mistakes of the past. The main lesson to be learned from the revolutionary movement of 1968-69 is that of the need for a revolutionary party, steeled in Marxism, the ideology of the working class. The lack of this in 1968-69 led to the idea that the movement could conciliate with capitalism. The problem with leaders like Zulfiqar Ali Bhutto and his daughter Benazir was that they aroused the masses to challenge the system, but when the decisive moment came they vacillated and chose the conciliatory road. Lal Khan stated that the interests of the proletariat and the interests of the bourgeoisie are absolutely irreconcilable. Zulfiqar and Benazir paid for this mistake with their lives. Zulifiqar Ali Bhutto in his last book ‘If I am Assassinated' written in the death cell before his assassination wrote that he was suffering this fate because he tried to compromise the irreconcilable class interests. The state had to decapitate the movement and give the masses no option to channel their discontent through.

The difference today however, is that there exists an embryo of this revolutionary leadership. The Struggle, the Pakistani section of the International Marxist Tendency, is the biggest socialist group in Pakistan. It is fighting inside and outside the PPP, with the poor workers and peasants against the criminal policies of the Zardari leadership and the right wing parties. The Struggle is sizable, but it is still only an embryo. The masses don't wait for revolutionary parties, they move when they've had enough. Therefore, it is up to us to build the revolutionary vanguard parties today, to give a Marxist leadership to the revolutionary movements of tomorrow.

Several comrades spoke from the floor making points and asking questions. More than one emphasised and reiterated the point mad by Lal Khan, that the PPP founding manifesto explicitly indicated a socialist society as the goal of the party. They also explained how the present leadership has abandoned those founding principles, sidelining any of those who dare to defend them today.

One speaker from the floor raised doubts about socialism, referring to the failure of the system in the Soviet Union and Eastern Europe, clearly confusing Stalinism with genuine socialism. Other speakers from the floor answered this by referring to Trotsky's analysis in his famous 1936 text, The Revolution Betrayed.

Lal Khan summed up the debate, answering points made and adding others, emphasising the need to build the revolutionary Marxist tendency that is required inj the present situation in Pakistan. He received an enthusiastic applause from the whole room. The appreciation for this book was also reflected by the fact that the book sold out as the majority of those present in the room bought copies.