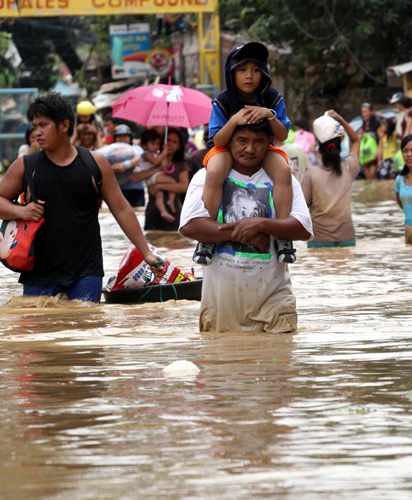 We received from the International Desk of the Partido Lakas ng Masa (Party of the Labouring Masses) in the Philippines this request to publish an appeal for help in the rescue efforts being organized by the party. We are publishing it as a small step in helping these comrades in their efforts.

Typhoon Ondoy swept through the Philippines on Saturday, September 26, displacing some 250,000 people and according to the most recent reports, has left some 86 people dead. Urban centres, such as Metro Manila, were also badly affected with over 80% of the city under water. In some areas the water was around 4'-5' deep. Apparently one month’s rainfall poured down in a matter of a few hours.

We are conducting relief operations through our own networks and we are appealing for funds to support our relief work. The typhoon has now cleared and today we will be assessing the situation based on reports from our organisers on the ground. This will also include getting information on the state of the government's disaster management response. Reports are coming in about the inadequacy of the government's response - in some areas people are still waiting for rescue operations to get to them and in other cases people are still waiting for food assistance.

According to one of our organisers around 30 people are buried in the mud in an urban poor community in Payatas and there is still no sign of assistance. This means that the media reports of the casualties are clearly under-reported. We are also receiving reports of some children of one of our members having perished in the floods as a result of electrocution – an especially dangerous problem during flooding. Our hearts go out to Alin Linda.

We will also be conducting local mobilisations over the next few days to ensure that people get adequate relief support.

We are appealing for donations from our overseas friends and networks to assist with our relief operations. Please send donations to the following NGO associated with our networks.