Details
In Defence of Marxism
18 September 2006

Share
Tweet
We have received several reports from around the world on pickets and other actions against the electoral fraud in Mexico. 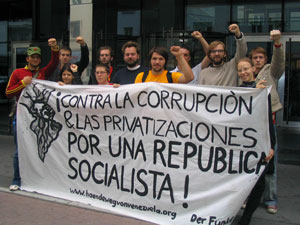 Last  Saturday, September 16, a group of comrades from Der Funke and Hands off Venezuela - Austria organized a picket in front of the Mexican embassy in Vienna. Our aim was to protest once again against the electoral fraud and to declare our solidarity with the mass protests in Mexico. We wanted to demonstrate our anger at the repression of democratic organs of the movement like the APPO in Oaxaca and against political activists from the PRD, for example the comrades from Militante, against whom slanderous comments have been made - including that Militante is a terrorist (!) organisation.

In front of the Mexican embassy we unfolded a banner with the slogan of our Mexican sister organisation Militante: ¡CONTRA LA CORRUPCIÓN, CONTRA LAS PRIVATIZACIONES, POR UNA REPÚBLICA SOCIALISTA! (Against Corruption, Aginst Privatization, For a Socialist Republic!)

The building was empty due to the national holidays in Mexico. For this reason we decided to send the protest letter with our signatures and fotos of the demonstration to the ambassador.

On Saturday, September 16, more than 20 people gathered at the doors of the Mexican embassy in London to protest against the rigging of the presidential elections and in support of the National Democratic Convention, called by Andres Manuel López Obrador on the Zocalo Square of Mexico City on that same day.

off Venezuela campaign.  "Down, down Calderon, No to electoral fraud" or "Calderón cabrón, trabaja de peón" were amongst the slogans chanted in a lively mixture of Spanish and English by the picketers during the 2 hours that the action lasted, from 12 to 2pm.

Leaflets with information about the rigging of the elections and the revolutionary movement that it has sparked were given out to passers by (link to leaflet), some of whom joined the picket for a few minutes as Jorge Martin, from Hands off Venezuela, and Alan Woods, editor of www.marxist.com, addressed the gathering, before going back to their occupations,

Jorge Martin recounted all the evidence that supports the claims of electoral fraud in Mexico and how the Mexican institutions, despite recognising that there had been serious irregularities prior to the elections (interference by president Fox and business groups) and in the counting of the votes, had decided to award Vicente Calderón, from the conservative party PAN, the victory in the elections.

Jorge also condemned the attempts of the media in Mexico to criminalise the Popular Assembly of the People of Oaxaca (APPO) and the Mexican section of the International Marxist Tendency, Militante (www.elmilitante.org ), which he denounced as the first steps to prepare public opinion for repression against them.

Alan Woods highlighted the revolutionary character of the mass mobilisation that is taking place in Mexico and related them to the unfolding Latin America revolution. "There is not a single stable bourgeois regime, from Tierra del Fuego to Rio Bravo", he said, and pointed out the limits of American imperialism. "In other times - he said - if this same situation was taking place we would open a newspaper and read a headline like, "‘The marines have landed and the situation is under control.' However, where are the marines now? They cannot intervene directly, they are entangled in Iraq."

Alan, went on to point out the hypocrisy of the bourgeois media and how they have ignored the events taking place in Mexico, where millions of people have mobilised in defence of their most fundamental democratic rights, and how this same media filled their front pages for days and weeks with the "so-called" Orange Revolution in Ukraine and the protests that followed the last elections in Belarus.

Finally, the meeting was closed with the announcement of a series of meetings and discussions that www.marxist.com - In Defence of Marxism - has launched on the theory of revolution and its dialectical process, the first of which, devoted to Mexico, will be called Insurgent Mexico with Phil Mitchison, political editor of Socialist Appeal, as speaker. It will be held on Saturday, October 7, from 1 to 4 pm at the Calthorpe Arms, 252 Gray's Inn Road, W1 (King's Cross Tube Station).

Liam McQuaid also announced a series of meetings that are being organised in East London on Latin America. The first one will be on Venezuela and Mexico and Jeremy Dear (general secretary NUJ) and Jeremy Corbyn MP (who is currently visiting Mexico) will speak. The meeting will take place on October 10, at the Praxis Centre, Pott Street, in Bethnal Green.

See also the report on the Hands off Venezuela site. 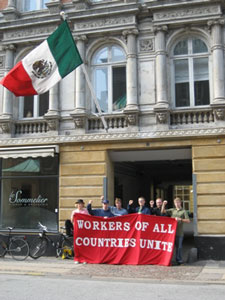 On September 16, Socialistisk Standpunkt, the Danish section of the International Marxist Tendency, held a picket outside the Mexican Embassy.We are against the election fraud, organized by the largest capitalists in Mexico and supported by American imperialism, that has stolen the elections from Lopez Obrdador and the workers of Mexico. We are against the attacks on APPO (Popular Assembly of the People Popular Assembly of the People of Oaxaca) in Oaxaca. We are against the accusations in the bourgeois papers against the Marxists in Militante, who are said to be terrorists. We support the National Democratic Convention and the fight of the people of Mexico against poverty, exploitation and suppression.

Long live the National Democratic Convention!
Forward in every neighbourhood, factory, and school towards the building of a new power!
Not a single step backwards in the struggle to transform society!

Italy: picket in front at the Mexican consulate in Milan

September 15, Friday afternoon: 25-30 activists from the Italian Hands Off Venezuela campaign and Falcemartello, the Marxist tendency in Rifondazione Comunista, gathered in front of the Mexican consulate in Milan.

We called this picket to protest against the attacks against democratic rights in Mexico, and 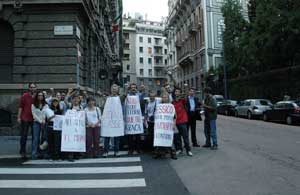 On the posters carried by the demonstrators there were also slogans against electoral fraud and appeals to form "10, 100, 1000 Oaxacas all over the country".

In the previous days we try to fix a meeting with the Consul to hand him a protest letter signed by dozens of PRC and trade union leaders. Unfortunately, no one was present at the consulate when we arrived.

We were not disappointed by this. We know that there is a lot at stake in the events unfolding in Mexico and we will continue to support the struggle of the Mexican workers and youth for a radical change with all the means at our disposal.

Pakistani Workers and Youth show solidarity with the Workers of Mexico

Protests and solidarity meetings were held in different parts of Pakistan to show solidarity with the workers of Mexico in their fight against electoral fraud.

Some 150 people demonstrated outside the Karachi Press Club under the banner of the Pakistan Trade Union Defence Campaign.

Workers from Pakistan Steel, Karachi Port Trust, the Post Office and other institutions participated in the demonstration. The president of the Pakistan Railways Workers' Federation, Manzoor Razi, was also present at the picket along with other trade union and student leaders.

The PTUDC, along with Youth for International Socialism, organized a rally in the center of the city to 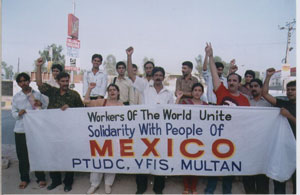 express concern and solidarity with the Mexican people who have launched a movement against the rigged elections held of July 2, 2006. The comrades demonstrated against the intrigues of the Mexican ruling class', under the supervision of US imperialism, to rig the election to prevent Lopez Obrador from becoming president. Participants raised slogans against this deliberate fraud such as "Down with imperialism, Down with Mexican election fraud!", "Long live international workers' solidarity, long live the world socialist revolution!", "Workers of the world unite!", "An injury to one is an injury to all!" Comrades Anam, Aslam, Zeshan, Mahbalus, Ans Ahmad, Pasha, Waqas, Faruq Bhati, Mujahid Pasha, Asad Patafi and many others attended the rally.

Comrades of YFIS and the PTUDC held a demonstration at the Rawalpindi Press Club to show solidarity with the workers of Mexico. Comrade Yasir Arfat from Sui Northern Gas and Comrade Ibrar Farhat from the Punjab Union of Journalists were present at the rally. Comrade Huma Zain along with several other comrades represented YFIS.

The Jobless Youth Movement (BNT) in Lahore organized a seminar at the Junior Model School Samnabad to discuss the situation in Mexico, where workers and youth are struggling for their basic rights.

Comrade Paras presented a resolution of solidarity with Mexican workers which was unanimously accepted. Students from the University of Engineering & Technology Lahore and Punjab University Lahore were also present at the occasion.

The Jammu Kashmir National Students' Federation is holding its annual convention on September 20-21. The JKNSF faces the serious opposition of the state, which does not wish to see the students united and fighting for their rights. 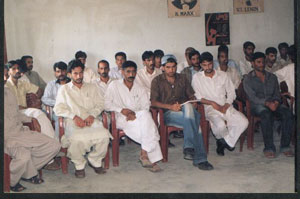 Mexico who are facing similar problems.


Comrade Adil Khan gave a detailed account of the problems faced by the people of Mexico and how they are struggling for their basic rights. He appealed to the workers and youth of the world to unite against state repression in whatever part of the world they may be.

All other speakers supported him and vowed to continue their struggle against injustice and tyranny.

In the end Comrade Yasir Irshad presented a resolution in support of the Mexican people which was unanimously accepted. 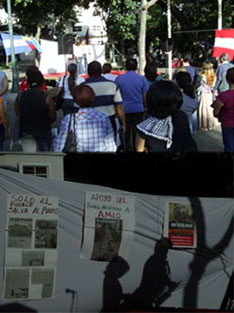