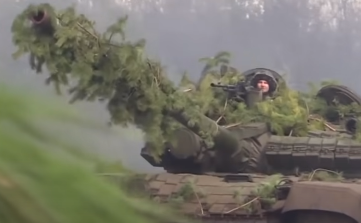 An escalation of tension in the Donbas region raised the spectre of open conflict, which would plunge people on both sides into a nightmare of bloodshed once more. Although troops have now withdrawn from the border, why did this scare take place? And who stands to benefit from continued strife in the region?

Since the signing of the Minsk-2 ceasefire protocols in 2015, the civil war in the Donbas de-escalated from open warfare. However, this did not mean an end to the conflict. The people living next to the battlelines are subject to frequent shelling, not to mention the terror of living in highly militarised areas. Besides this new norm for the people in the conflict region, every year has seen a period of reporting about the “re-escalation of the conflict” from Ukrainian and Western media, and the “threat of the Russian menace advancing”.

Similar scare stories have occured on the Russian side. Such a period of scaremongers can be identified every year from 2016-2019. However, the most recent escalation has gone further, with the mobilisation of troops from Russia, along with Ukraine and now even NATO ships. Russia has subsequently announced the pulling back of troops from the border, but the heightened tension might remain for some time.

The past year has seen the most heightened period of class struggle in the former USSR for the past decade. The protest movement instigated by the arrest of opposition figure Navalny has brought masses of protesters to Russian streets. Mirroring this, Ukraine has seen a series of strikes and anti-travel-fare-hike protest movements across the country over the past year. Both of these situations have begun to frighten their respective ruling classes and resulted in increased repressive measures. For instance, Ukrainian President Volodymyr Zelenskiy decided to ban opposition media. 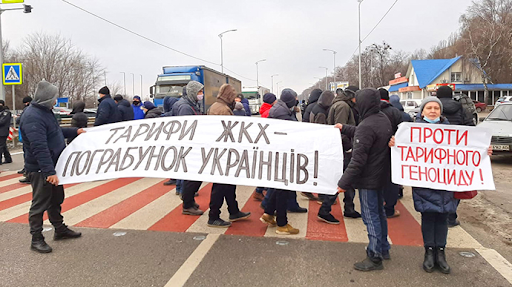 One of the thousands of utility price protests across Ukraine recently, known as “Against Tariff Genocide” / Image: 112 International

The similarity of these situations is not accidental, nor the result of a conspiracy against the people of Eastern Europe. They are the result of the capitalist crisis ravaging the fragile post-Soviet economies. The respective ruling classes on both sides have no way out of the crisis other than ramping up patriotism on one side, and exacting repression against any hint of dissent. At the same time, these bourgois upstarts buy and build themselves elaborate mansions and yachts at home and abroad, in sharp contrast to the declining living standards of the average Ukrainian or Russian worker.

War profiteering is endemic under capitalism, from all sides. Modern armies do not just depend on a supply of weapons, but all manner of logistics involved in feeding, housing, fueling and clothing soldiers and staff. Poroshenko and Kolomoisky’s associate companies have been heavily involved in supplying the armed forces, and many more contracts and business interests are likely unreported.

There has been a move in the last period towards opening up military provision to the international market, rather than relying on Ukrainian domestic industry. Not coincidentally, the national security and defence budget was increased to a record 5.45 percent of GDP in 2020, and will take up an even greater proportion at the end of the year.

Despite having a large military industry relative to its economy overall, the Ukrainian army has been importing military hardware since the start of the civil war in 2014. Imports now account for 10 percent of the yearly military supply, exclusively from NATO countries, especially the US. Given the weakness of Ukraine’s economy, especially with the latest crisis, they have often been granted hardware alongside the loans they need to buy them. In this way, the Ukranian economy and government become even more dependent on foreign imperialist interests.

Last August, Ukraine took on a $1.6 billion 10-year loan to buy a number of UK-made Barzan-class navy boats: a high price for minimal improvement to its Black Sea fleet. Just this month, Zelenskiy and Turkey’s President Erdogan agreed to the purchase of Turkish drone planes for $69 million. 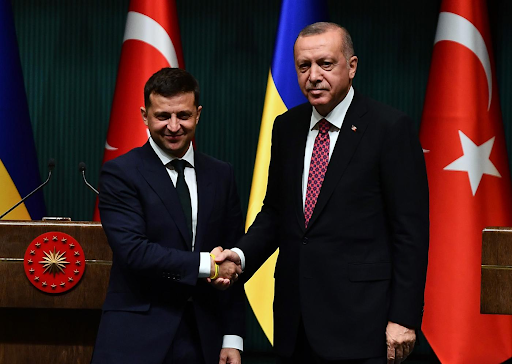 Arms sales to Ukraine have been a profitable business for powers like Turkey / Image: Mustafa Kaya

While the US remains the main influence on Kiev, lately we have seen the incursion of smaller players, like Turkey and the UK. Erdogan has based his support on pan-Turkism. This includes accruing some support among Crimean Tatar nationalists, who are also currently allied with Kiev. While it is unlikely that Erdogan would want open conflict with Russia, he has been pushing back against Moscow. We should note the role that Russia’s backing of Syrian President Al-Assad played in stifling Turkey’s ambitions in Syria. The recent conflict in Nagorno-Karabakh put them on opposite sides of another proxy war, with Turkey’s backing of Azerbaijan forcing Russia to step in. And as with other secondary NATO countries, Turkey is content to take advantage of Ukraine’s desperation to sell some military hardware.

The UK has also emerged in a similar vein, with Prime Minister Boris Johnson having pretentions on regaining some of Britain’s diminished imperialist prestige by using Ukraine to finance the domestic arms industry. On 18 April, it was announced that a group of Royal Navy ships were being sent to the Black Sea.

Finally, the interests of the Russian military industry cannot be overlooked, as they trail the US at 20 percent of the market. The encirclement of some novice Ukrainian troops in 2014 was a boon for their image after they decided to seriously back the Donbas rebels.

But the question of selling arms is secondary for Moscow, especially with the economy impacted by Western sanctions. This conflict is very close to home, and the prestige of the Putin regime relies heavily on being able to put on a show of force against Ukraine and NATO. At the same time, Putin is trying to keep further sanctions to a minimum, as NATO countries in Western Europe are a primary destination for Russian exports such as gas.

The situation in the Donbas

The re-escalation, while not leading to open conflict yet, is recalling the worst days of 2014 for the people in Donbas, especially those closest to the border. The bombing-bunker drills of 2014-15 are back in many towns. The shelling on the border areas was ongoing, even before recent escalation saw increased shelling. It is difficult to know precisely which reports of shelling are genuine, with both sides trying to claim political victimhood. Nevertheless, it is clear that there are casualties on both sides of the border: with a few reported dead every few days. Reports of indiscriminate shelling are probably true, given the documented attitude of far-right elements of the Ukrainian army towards the separatist population. 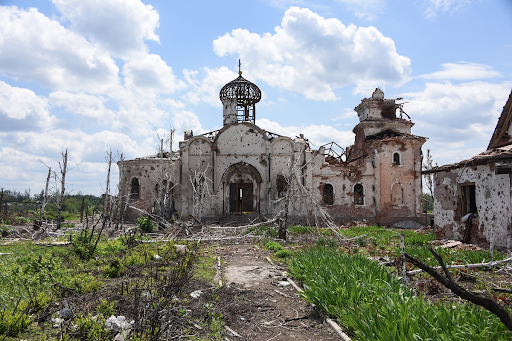 The Donbas itself is governed by what can be characterised as a military junta, dependent on Russia for aid. Opposition figures on both the left-wing and Russian nationalist side were assassinated a few years ago, even the “in-between” (moderate) Prime Minister of the Donetsk People's Republic, Alexander Zakharchenko.

Some factories and mines have been reopened after the conflict, but the severed economic links to Ukraine cannot all be rerouted through Russia given the capitalist crisis, where the government is already subsidising its own production to counteract low demand. While prices on basic goods remain lower compared to the situation across the border, unemployment is rampant, and many who can work are now living in Russia or less frequently, Ukraine.

The mood leading to the separation of the Donbas were varied, but many people had the illusion that secession to Russia would bring better economic prospects. This is not the case now, as Moscow, rather than recognising or integrating the Donbas, has been content to use the people there as a bargaining chip against Ukraine and NATO. Desperate Donbas emigres also provide a source of relatively cheap labour for Russian capitalists. Russia, not being able to suppress unrest at home, is not in a position to rebuild the Donbas nor does it have any interest in dedicating enough resources to stabilise the lives of the citizens there. Sufficient aid is sent to prevent a humanitarian catastrophe, but not much more.

The question of open conflict also brings about the question of a possible reintegration of the Donbas regions into Ukraine. A recent poll revealed the moods of the people living there. While previous polls showed separatist inclinations on both sides of the lines, the Kiev control lines are now heavily favouring re-integration of the Donbas into Ukraine, while the breakaway side is heavily in favour either of formalisation of independent republics, or integration into Russia. This trend can be explained partially by the flight of separatist-leaning refugees from the Kiev-controlled areas to Russia, but also by a feeling that Moscow has betrayed the separatist movement.

The fear among the population of the separatist areas is justified by the potential reprisals of the armed Ukrainian far-right. Many remember such incidents from the early days of the civil war. If anything has been learned in the 30 years since the fall of the USSR, it is that the oligarchs will subject the workers (be they Ukrainian, Russian or otherwise) to bottomless depths of misery to increase their own wealth and privilege, along with accommodating the demands of the IMF and imperialism.

Here, recall the memory of late left-wing Donbas rebel leader Alexey Mozgovoy, who wanted to turn the civil war into an uprising on both sides against their own oligarchies, notably registering for election in Ukraine before his assassination. This spirit of common solidarity against the post-Soviet bourgeoisie is the only road for workers of the former USSR to escape their misery.

Only now has the escalation begun to subside, with Russian troops pulling back from the border. A resumption of open conflict seems unlikely. The result of further fighting for workers in Donbas, Ukraine and Russia – whether living in the conflict zone, drafted into the army or swept up by nationalism – would be nothing but a sharper reduction of living standards for themselves and their neighbours. There are reasons to suspect that, for the ruling class of Ukraine and Russia, this show of force is simultaneously about trying to win concessions from the other side, while also frightening their domestic class struggles into submission. Resumption of open war is unlikely, but times of crisis are always more unpredictable.

Marxists on all sides must unequivocally oppose all advocates for war and expose their rotten profiteering from this conflict. In Ukraine, this runs from the oligarchy to all of the rabid nationalists who have entered the employ of the government in the past five years. The only way the oligarchy will be brought down is through class solidarity across all lines of division. While those making this call are few, our perspective is the only road forward – and our numbers are growing.