Share
Tweet
The present world financial crisis is pushing many people to seek answers, explanations and a way out. That explains why we see more and more items in the media about Marx being "back in fashion" and so on.

Articles have appeared recently in newspapers and websites around the world highlighting the fact that sales of Marx’s books over the past year have risen sharply in East Germany, particularly among young people. It is worth quoting just a few of these articles. 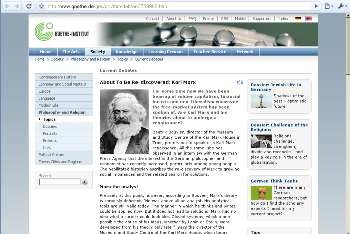 The Goethe-Institut published an article “About To Be Re-discovered: Karl Marx” in which we read the following:

“For some time now we have been hearing of robber capitalism, financial locusts and neo-Liberalism wherever the free-market system has been spoken of. Are Karl Marx and his theories about to undergo a renaissance?”

“Beatrix Bouvier, director of the Museum and Study Centre of the Karl Marx House in Trier, prefers not to speak of a Karl Marx renaissance. All the same, she has observed in an interview with the German Press Agency that the interest in the German philosopher and economist has recently increased, particularly among young people.”

On the STV website we found an article under the headline “Global crisis sends east Germans flocking to Marx” which states the following:

“Two decades after the Berlin Wall fell, communism's founding father Karl Marx is back in vogue in eastern Germany   thanks to the global financial crisis.

“His 1867 critical analysis of capitalism, "Das Kapital," has risen from the publishing graveyard to become an improbable best-seller for academic publisher Karl-Dietz-Verlag.

“ ‘Everyone thought there would never ever again be any demand for Das Kapital,’ managing director Joern Schuetrumpf told Reuters after selling 1,500 copies so far this year, triple the number sold in all of 2007 and a 100-fold increase since 1990.

" ‘Even bankers and managers are now reading Das Kapital to try to understand what they've been doing to us. Marx is definitely 'in' right now,’ Schuetrumpf said.”

The author goes on to explain that this return to Marx reflects a rejection of capitalism by many people in eastern Germany and quotes a recent poll that shows that 52 percent of eastern Germans consider the free market economy as “unsuitable” and 43 percent stated that they preferred socialism to capitalism. These figures are backed up by a few very revealing interviews.

The article quotes Thomas Pivitt, a 46-year-old IT worker from east Berlin who says, “We read about the 'horrors of capitalism' in school. They really got that right. Karl Marx was spot on. I had a pretty good life before the Wall fell. No one worried about money because money didn't really matter. You had a job even if you didn't want one. The communist idea wasn't all that bad."

Hermann Haibel, a 76-year old retired blacksmithis quoted as saying, “I thought communism was shit but capitalism is even worse. The free market is brutal. The capitalist wants to squeeze out more, more, more"

Here in Britain the Daily Mail also took up the story in an article, “Credit crunch boosts sales of Karl Marx's Das Kapital in Germany” which also gives the figures: “The book has sold 1,500 copies so far this year, triple the number sold in all of 2007 and a 100-fold increase since 1990.”

Now some bourgeois cynics may point to the fact that 1500 is still a small figure, but according to these figures in 1990 they were only selling 15 a year. We can be sure that German TV channels and newspapers are not advertising Das Kapital. The biggest advert for Das Kapital is the world financial meltdown and the general conditions workers are having to suffer under capitalism.

Life teaches, and today people are being forced to learn very quickly. With this comes a desire to really understand how this system works. What better authority to turn to than Karl Marx himself, who long ago explained the mechanism that lead to crises like the present one we are living through.

One only needs to look at the state of Iceland at the moment to see how relevant Marx was. It is not just one bank or one company that has gone bankrupt. Here we have a whole country that has gone down the pan. Gauti Kristmannsson, an Icelandic journalist writing for the New York Times outlines the bleak picture facing his country in his article “The Ice Storm”:

“One by one, the mighty banks have been seized by the government, and Icelanders, aghast, have been told that each and every one of us owes millions of dollars   to whom, we don't know. (…)

“The first 500 bankers have lost their jobs in one go; many others are waiting for the double blow of unemployment and losing their house as their mortgage payments soar. (…)

“Suddenly, there are lines in the bank for foreign currencies, and there is a limit on how much we can get   overseas banks are refusing to accept our freefalling currency, the krona. One of my students, studying in Spain, can't get money from Iceland for her rent. Importers and exporters can't get currency to conduct business. Icelandic tourists abroad have problems getting cash from ATM's. The British government has applied terrorist laws to freeze the assets of an Icelandic bank; the list goes on as if it were a script for the nightmare of globalization. (…)

“…the shock is so strong that neither anger nor sorrow have really taken hold. We thought Iceland was an independent country that could take care of itself without the help of Russia or the International Monetary Fund, that our currency amounted to something, that we could own companies and banks all over the world. (…) In many ways, we uncritically accepted the capitalist system, which now appears to have been a gigantic casino without an owner. We did in the end believe that we could get ‘money for nothing’ and now we face the fact that we will get nothing for our money.”

He concludes his article by asking the question “What to do” and answers it himself, “nobody knows, least of all the politicians, bankers, tycoons…” but as in Germany, Karl Marx is coming to the rescue. This autumn a new edition of "The Communist Manifesto" is to be published in Iceland.

The massively improved sales of Das Kapital in Germany and the publication of The Communist Manifesto in Iceland are anecdotal items of news. But sometimes anecdotes can reveal far more than a thousand opinion polls. People all around the world have been shaken by the events on the financial markets. Now they are looking for answers and as they don’t find them in any of the official, dominant economic theories they turn to the only one that predicted what is happening today, Marxism!

If anyone doubts this, read the following quote from the Communist Manifesto, published in 1848, i.e. 160 years ago:

“Modern bourgeois society, with its relations of production, of exchange and of property, a society that has conjured up such gigantic means of production and of exchange, is like the sorcerer who is no longer able to control the powers of the nether world whom he has called up by his spells. For many a decade past the history of industry and commerce is but the history of the revolt of modern productive forces against modern conditions of production, against the property relations that are the conditions for the existence of the bourgeois and of its rule. It is enough to mention the commercial crises that by their periodical return put the existence of the entire bourgeois society on its trial, each time more threateningly. In these crises, a great part not only of the existing products, but also of the previously created productive forces, are periodically destroyed. In these crises, there breaks out an epidemic that, in all earlier epochs, would have seemed an absurdity — the epidemic of over-production. Society suddenly finds itself put back into a state of momentary barbarism; it appears as if a famine, a universal war of devastation, had cut off the supply of every means of subsistence; industry and commerce seem to be destroyed; and why? Because there is too much civilisation, too much means of subsistence, too much industry, too much commerce. The productive forces at the disposal of society no longer tend to further the development of the conditions of bourgeois property; on the contrary, they have become too powerful for these conditions, by which they are fettered, and so soon as they overcome these fetters, they bring disorder into the whole of bourgeois society, endanger the existence of bourgeois property. The conditions of bourgeois society are too narrow to comprise the wealth created by them. And how does the bourgeoisie get over these crises? On the one hand by enforced destruction of a mass of productive forces; on the other, by the conquest of new markets, and by the more thorough exploitation of the old ones. That is to say, by paving the way for more extensive and more destructive crises, and by diminishing the means whereby crises are prevented.”

We challenge anyone to find a better description of what is happening now in the year 2008. Read the theories of any of the major bourgeois economists, read Friedman or Keynes, read the myriad of articles published in the financial journals of the past twenty years. You will find that when they refer to Marx they do so to show how wrong he was. Of course, some of the more serious analysts have come close to seeing what was going on, but none achieve the clarity of Marx.

The worrying thing for the bourgeoisie is that Marx did not simply analyse the workings of the capitalist system; he pointed out that the crises of the system eventually lead to revolution, to a revolt of the ordinary working people who have to suffer the consequences of these periodic crises. That idea is beginning to sink into the minds of many workers and youth around the world. If you are one of them we invite you to get involved in the International Marxist Tendency and help us build a force that can put an end to this crazy system.