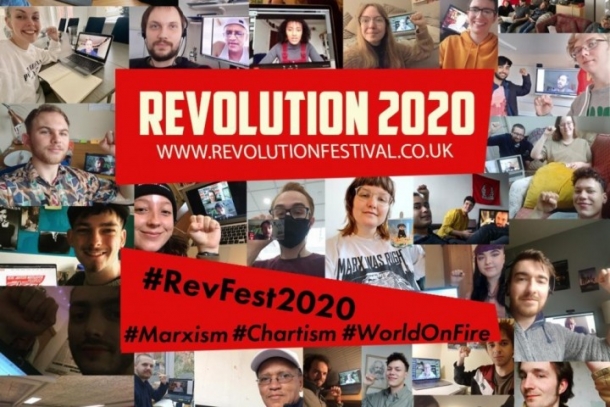 Despite the barriers presented by the pandemic, this year’s Revolution Festival was our British comrades' biggest and best ever, with over 600 attending the weekend’s incredible discussions, which highlighted the vital importance of Marxist ideas.

This past weekend – 23-25 October – marked another extremely successful Revolution Festival for Socialist Appeal, and an important milestone for the forces of Marxism in Britain.

The event is held every October, providing a platform for discussing Marxist theory and revolutionary ideas. Usually the festival takes place physically, in London. But this year, of course, attendees tuned in online, from home.

Despite the barriers imposed by the pandemic however, the festival was bigger and better than ever, with over 600 people signing up and buying tickets to attend and participate in an amazing programme of discussions.

In this respect, necessity was turned into an opportunity, with people from around the country – and internationally – joining in who might otherwise have been unable to.

This incredible turnout is the biggest attendance for any event ever organised by Socialist Appeal, the Marxist tendency in Britain. And most noticeably, this large attendance was matched by an equally impressive level of political and theoretical discussion.

In both quantity and quality, then, Revolution Festival 2020 shows that the Marxists in Britain are going from strength to strength.

The fight to change society will not happen by itself. Every worker, student, unemployed person - young and old - must get involved in this battle. There has never been a more important task. Don’t stand on the sidelines! Help us build the Marxist tendency in Britain and internationally in the fight for socialism! Join us! . . . . . #RevFest2020 #WorldOnFire #Marxism #Socialism #Communism #Revolution #SocialistAppeal #IMT #internationalmarxisttendency #Marx #Engels #Lenin #Trotsky #Bolshevism #Bolsheviks

This year’s event took place against a backdrop of an ever-deepening global crisis. This was reflected in the festival’s theme: A world on fire.

Coronavirus has turned the world upside down, posing huge risks both to people’s lives and their livelihoods. At the same time, humanity’s very existence is at threat, as the climate crisis looms and international inaction continues, with the capitalists and their political representatives more interested in short-term profits than preventing a climate catastrophe.

We can also see, however, that workers and youth are fed up with profits being prioritised over the needs and wellbeing of people. This is why mass movements have erupted in countries across the world, as the working class begins to make its voice heard, with millions drawing revolutionary conclusions.

This turbulent situation was summarised in the tagline for Revolution Festival 2020: "The old world is dying; and a new society is struggling to be born."

The purpose of this weekend, therefore, was to equip ourselves as activists with the revolutionary ideas needed to organise, fight, and transform the world today. And there’s no doubt that this is what the festival accomplished.

The festival began on Friday night with the launch of Chartist Revolution, the latest publication from Wellred Books. The book’s author, Socialist Appeal editor Rob Sewell, gave an inspiring speech outlining the subject of the book: the revolutionary movement of the Chartists, and the important lessons from these historic events for Marxists today.

There is much to learn from the Chartists, Rob noted; and yet they are often overlooked. This book, therefore, is much-needed, in order to properly understand the origins, history, and revolutionary traditions of the British working class.

Rob’s talk definitely whetted appetites, and should certainly spur all of us on to grab a copy of Chartist Revolution, in order to delve into our movement’s radical past.

This provided an excellent start to the festival, setting the tone for the rest of the weekend ahead.

Racism and the police

Following Friday’s opening rally, there were a total of 18 different sessions on offer over the Saturday and Sunday. Talks covered a wide range of important topics on theory, history, and current events: from the 1929 Wall Street Crash and the Great Depression; to the potential for revolution in Britain; to the role of the individual in history.

On Saturday, one strand of the programme looked at various questions surrounding the issue of racism and police violence – questions that have been thrust into the spotlight thanks to the worldwide explosion of the Black Lives Matter movement.

Covered in these sessions were talks on fighting racism, the role of police, and the history of imperialism in Africa. Topical discussions like these are essential for understanding how to channel the incredible energy of the protests and demonstrations into real, lasting change.

The session on the role of the police, for example, provided an important insight into what demands socialists should raise today in relation to the institutions of the capitalist state.

Comrades highlighted that the police exist primarily to defend the interests of the capitalist class. Police repression, in this respect, is ultimately a reflection of the exploitation and oppression inherent to the capitalist system.

Elsewhere on Saturday, attendees were able to participate in an array of fascinating discussions, including sessions on why we reject academic ‘Marxism’; the life and ideas of Friedrich Engels; the rise of China; and perspectives for the trade unions in Britain.

Belly of the beast

Saturday’s discussions concluded with a plenary rally on the upcoming US elections, taking place in the context of the deepest crisis in the history of capitalism.

Alan Woods, editor of In Defence of Marxism, started the rally by providing a perspective on the global situation. He explained how the capitalist system is at a complete impasse, and how the bourgeois politicians have no answers or solutions to offer.

After Alan was Tom Trottier from the editorial board of Socialist Revolution, sister publication of Socialist Appeal: written from within the belly of the beast, in the USA.

Tom provided an analysis of the US presidential election and the false choice facing working-class voters, since neither the Democrats nor the Republicans offer actual solutions to the problems facing them.

Both Trump and Biden, ultimately, will primarily defend the interests of big business, the bankers, and the bosses. Rather than getting distracted by debates over who is the ‘lesser evil’, workers and youth must devote their energies to build the forces of Marxism, and to prepare for the class struggles and revolutionary developments that lie ahead.

The pace did not slow down on Sunday, with another full day of sessions on offer.

In one of the morning talks, for example, teacher and NEU member Natasha Sorrell examined the question of ‘who are the essential workers?’ – a now-familiar term that has dominated headlines since the beginning of the COVID-19 pandemic.

As Natasha explained, however, the coronavirus has demonstrated how, under capitalism, it is the workers, who are truly the most essential to the running of society, who are actually the most exploited and downtrodden. All the while, the capitalists – the least productive members of society – reap in profits from the exploitation of the working class.

This has been dramatically exposed by the COVID crisis: while workers experience falling or stagnating wages, the super-rich are seeing huge increases in their wealth. The world’s billionaires have increased their wealth by 27 percent during the pandemic, reaching an all-time high of £7.8 trillion!

Other discussions on the Sunday covered further key issues, such as that of the environment, fascism, and art and culture. If you missed any of these, or couldn’t make it to this year’s festival, check out our YouTube channel for recordings of all the talks!

The weekend ended on Sunday evening with a closing speech given by Alan Woods.

Alan succinctly summarised the underlying message of the festival: capitalism has got to go – and workers and youth must arm themselves with Marxist ideas in order to put an end to this rotten system.

One of the most important points to take away from the weekend, as Alan underlined, is the essential need for theory. Marxist ideas are not a matter of secondary importance; they are not an optional extra for those genuinely seeking to change the world.

As Lenin famously remarked, without revolutionary theory, there can be no revolutionary movement. Marxist theory is therefore vital as a guide to action, to organising, and to smashing capitalism.

As the crisis of capitalism deepens and interest in these ideas grows, we can confidently look ahead to the task of building the forces of Marxism in Britain and internationally. On this basis, armed with theory and determination, we can overthrow capitalism once-and-for-all and usher in a socialist future.