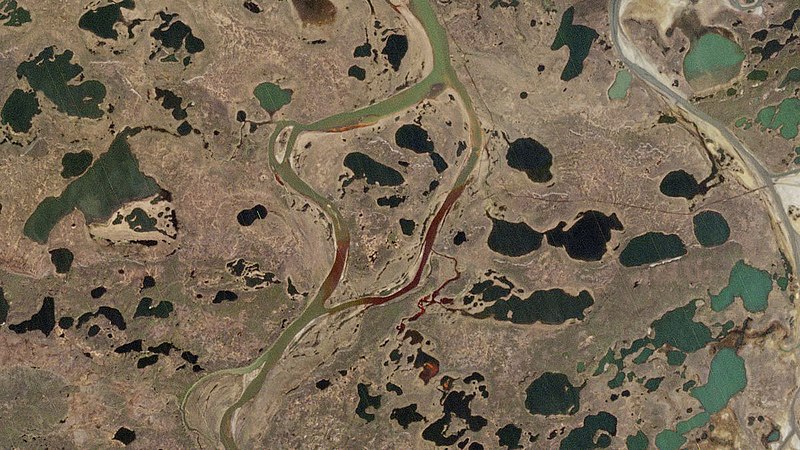 Rinat Akhmetchin, the Mayor of Norilsk, an industrial city in Russia, has been charged with negligence following a catastrophic oil spill from a local power plant. The spill has been ongoing since 29 May, with over 20,000 tonnes of diesel seeping into the surrounding soil and waterways. On 4 June, the Kremlin issued a state of emergency in Norilsk. The city is situated in Siberia, inside the Arctic Circle, where the local ecology is already severely disturbed due to some extremely worrying symptoms of climate change: a product of the irrational, rotten capitalist system, which is placing the planet in peril.

Thousands of tonnes of diesel have contaminated the Ambarnaya River, turning it crimson, and decimating the wildlife of the river and the animals and plants that depend on it for miles around. The contamination has also reached the fresh-water Lake Pyasino. The clean up-operation could take a total of five to 10 years to completely resolve, and cost over 100 billion roubles (£1.2 billion).

The cost will be paid for by the multi-billion dollar mining company, Nornickel, which owns the plant. Despite this, and although the city mayor has been charged with negligence, no criminal charge has been levelled against the company responsible for what is clearly a case of criminal mismanagement. Once again, we see the impunity with which the capitalist class are free to operate. Time and again the same capitalists and CEOs wreak environmental and human devastation, flouting the (limited) regulation that exists. Only when they are caught red handed are there any repercussions, and these amount to no more than a small slap on the wrist, and a command to clean up after themselves.

The majority shareholder of Nornickel, billionaire Vladamir Potanin, received a stern public word from Vladimir Putin, though he generally enjoys a cosy relationship with Russia’s oligarchs, and up until now has turned a blind eye to the irresponsible practices of Russia’s big polluters. Potanin tried to distance himself and his company from full responsibility. He implied that the spill was somewhat of a natural disaster, as the power plant’s foundations and supports began to sink due to melting permafrost from global warming. It is true that Siberia has been experiencing extremely warm weather for the region, and that permafrost is melting at an alarming rate. Investigators do believe that the thawing of the permafrost is the cause of the spill as the storage tank began to sink, but this hardly absolves the private owners of the responsibility of maintaining and adapting their infrastructure to a changing environment. The World Wildlife Federation described Nornickel’s response as “an attempt to write off Nornickel’s failure in risk management and ecological safety on the fashionable topic of climate change… The main factor is mismanagement.”

This is not an isolated incident. In 2016, Norilsk Nickel (now Nornickel) was responsible for another spill, turning the Daldykan River red with pollutants. Unless serious action is taken, scientists are warning there will be many more disasters to come. 55 percent of Russia’s territory is based on permafrost. Much of this is in Siberia, which is also where most of Russia’s oil and gas industry operates, as well as nickel mining, and even several nuclear reactors. To prevent further catastrophes, the scale of the transformation that will be needed in the coming period poses clearly the need for a planned economy. The chaos of the market and the irresponsible profiteering of the capitalists are clearly not up to the task. On the contrary; Greenpeace Russia has been warning for over 10 years of the risks that thawing permafrost posed to the country’s oil and gas infrastructure and the wider environment. As one spokesperson from the NGO correctly observed; “In principle, the interests of businesses are put above the ecology.” 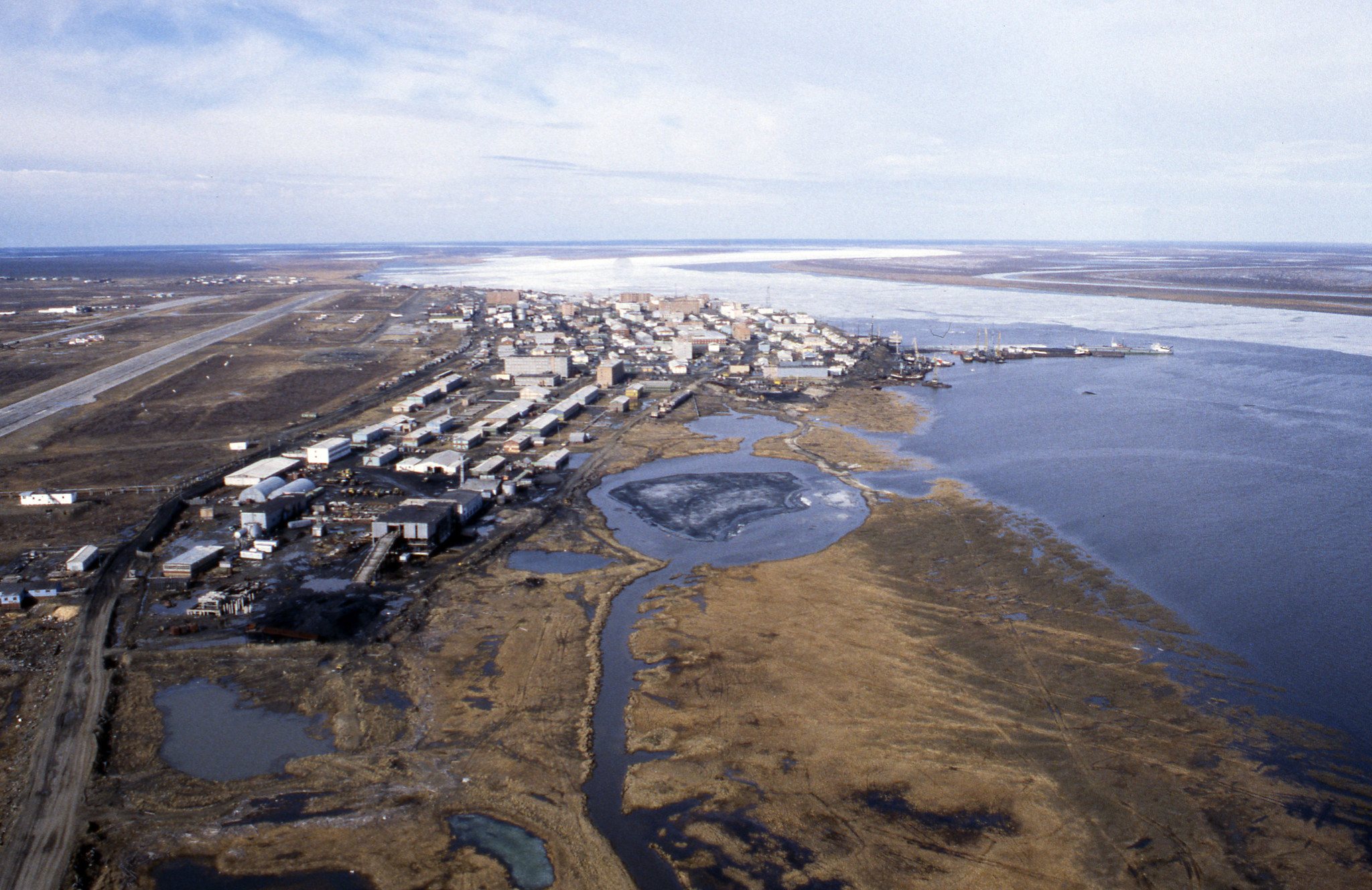 The Siberian town of Khatanga, usually one of the coldest places on Earth, has had an astonishingly warm summer, hitting temperatures of 38C. This is a worrying sign of the climate crisis / Image: GRID Arendal, Flickr

The general trajectory is a frightening one and clearly drastic action is required. The Siberian town of Khatanga, usually one of the coldest places on Earth, has had an astonishingly warm summer, hitting temperatures of 38C. Climate scientist Martin Stendel stated that, if it were not for man-made global warming, such a temperature would only be seen once every 100,000 years. The thawing permafrost is leading to rising sea levels, disturbed ocean currents, and accelerating global warming in a feedback loop; because the less ice there is, and the more open ocean, the more heat the earth absorbs from the sun rather than reflecting it.

Not only is the permafrost melting alarmingly quickly, but forest fires have been raging in Siberia and across the Arctic Circle for far longer than normal due to the unusual temperatures and weather conditions. The Taiga (boreal forest) that covers much of Siberia and in fact encircles the globe just south of the Arctic Circle from Canada to Kamchatka, is an invaluable store of carbon and is equally as important as the Amazon in regulating earth’s temperature and climate patterns. According to the Natural Resources Defence Council, some scientists estimate that 44 percent of the planet’s ‘land-based carbon’ is stored in the boreal forests.

Their continuing decimation by forest fires must be averted by a cross-continental, planned operation. However, as Marx stated over 150 years ago, once capitalism has outlived its progressive role, private property and the nation state become the main barriers to human progress. And in this case, the private profits of the capitalists and antagonism between capitalist nations prevents this essential cooperation. Thus, the question of climate change demonstrates the correctness of Marx’s analysis more clearly than anything.

Climate scientist Kevin Anderson draws similar conclusions, though he lacks a revolutionary perspective. As quoted in the Guardian:

“Many senior academics, senior policymakers, basically the great and good of the climate world have decided that it is unhelpful to rock the status quo boat and therefore choose to work within that political paradigm – they’ll push it as hard as they think it can go, but they repeatedly step back from questioning the paradigm itself…

“On mitigation, the academic community and the CCC have collectively failed the political realm and civil society by tailoring our conclusions to fit with what we judge to be politically palatable – all at the expense of scientific integrity.”

In other words: capitalism, private property relations, and the nation state set certain parameters on what is possible and realistic. The political interests of the ruling class erect barriers that hold back not only our ability to produce and distribute rationally, but even pollute and cripple the field of science.

“Many say that such rapid and deep change is unrealistic – but it’s much more realistic than believing a fair and progressive society can survive with 3, 4 or even 5C of warming.”

As Marxists we agree with this sentiment. A bright future under capitalism is a utopian delusion. However, we would have to challenge Anderson’s assertion that we currently have a “fair and progressive society”. The working class and poor of the world are yet to experience any such justice. The socialist transformation of society is the only realistic road to a future fit for humanity. The technological and productive capacity of humanity, the strength of the working class, and the dead end of capitalism provide the material conditions for its overthrow and for the building of a rational planned economy. This would lay the basis for liberating the field of science, for the tackling of climate change and the other social ills of poverty, hunger and prejudice.

As has been seen in the global phenomenon of the climate strike movements, climate catastrophe is radicalising the youth in particular: in Russia and worldwide. These young students and workers must be educated in the revolutionary philosophy of Marxism and connected to the working class in order to carry out the historic task we are faced with. The ice is melting, the clock is ticking and the working class is preparing for a mighty struggle.