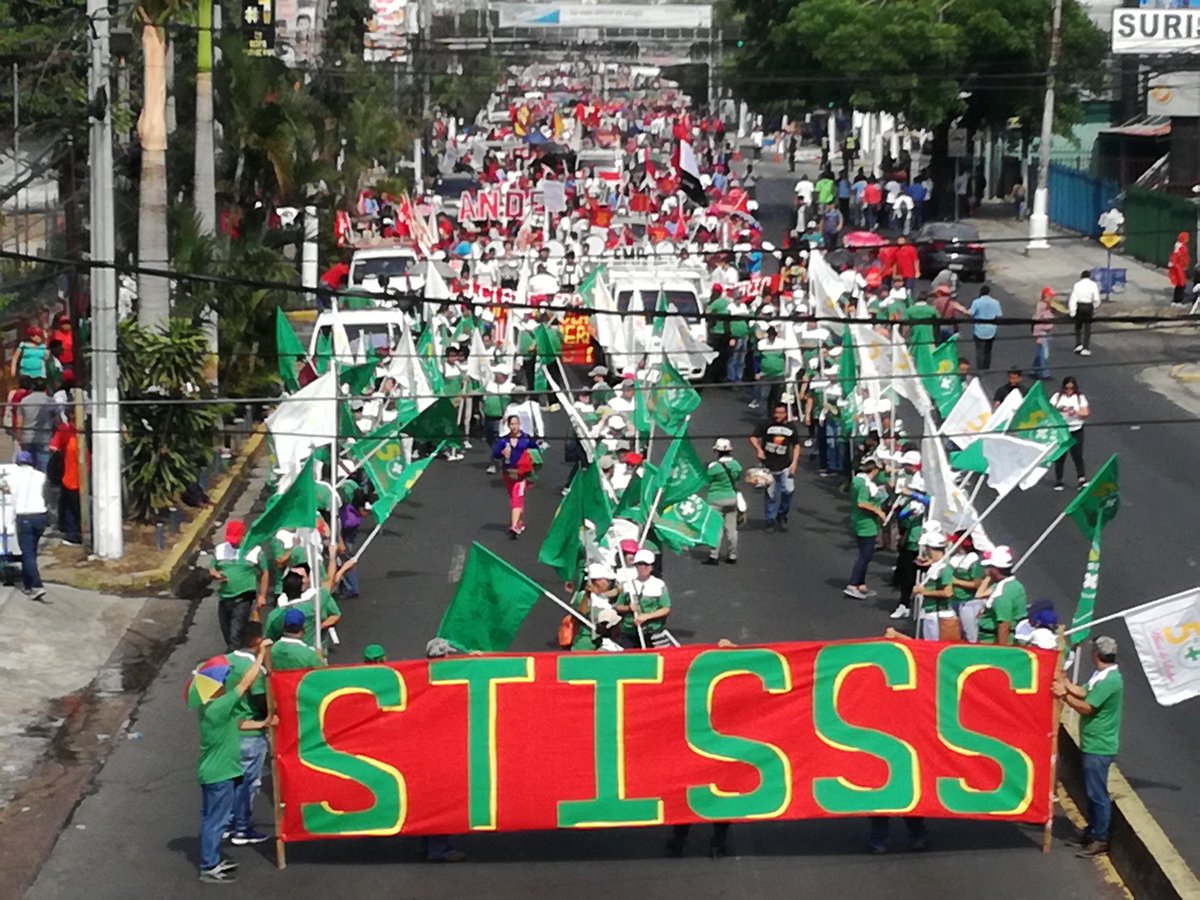 The new labour minister, Rolando Castro – a former unionist – has started a crusade against the Salvadoran Institute of Social Security Workers’ Union STISSS. Using the state apparatus and with “legal” manoeuvres, he has organised a coup d'etat against the union's leadership. The leadership that was elected in a general assembly in 2018 has been dismissed and expelled from the organisation. Based on an “assembly” that never took place, and with the backing of “legal” accreditations from the Ministry of Labour, a gang of puppets commanded by Ricardo Monge (an old trade union bureaucrat) has arbitrarily taken control of the union's leadership.

On 10 September, a group of alleged “trade unionists”, armed with drills and disc grinders, forcibly raided the union's premises in the city of Santa Ana. These are the first steps of a plan to destroy or domesticate a union that has been at the forefront of the struggle against privatisation in the last 20 years. We do no doubt that the intention is to remove what the capitalists see as an obstacle to their privatisation plans.

Originally published in Spanish on 11 September by Bloque Popular Juvenil |

The historical struggle of STISSS

In 2001, it was the heroic struggle of health workers in an alliance with the organisations of other exploited workers, that managed to stop the privatisation of health care. The struggle was successful because it relied on the traditional and revolutionary methods of the working class: strikes and mass mobilisations.

2001 witnessed the largest mobilisations since the end of the war. The union that led these wonderful and inspiring mobilisations was the STISSS: a union that is now under attack by the government.

Government complicit in the attacks

We reject the attacks against the STISSS by the nefarious minister of labour – a traitor to the interests of the working class. We condemn his actions and express our solidarity with the union. An attack on STISSS is an attack on the working class as a whole. We call on social and trade union organisations to come out boldly against these reactionary actions of the Nayib Bukele government.

In his first 100 days, the president has boasted of supplying the hospitals of the public health system with medicines. Superficially this seems like a good thing, but the deficiencies of our health system will not be solved with donations and cosmetic measures. For there to be a high-quality and affordable health system, the interests of the large pharmaceutical companies, private hospitals and construction companies must be seized. Because what is needed is resources, and these do not exist in the hands of the exploited, but in those of the capitalists.

The government's offensive against workers is part of an austerity plan, following the guidelines of the IMF, which has recommended cutting social spending (eliminating programmes such as Jovenes Con Todo and Ciudad Mujer) and “reducing the size of the state”; firing national television personnel and eliminating existing government departments without guaranteeing the right to employment for their workers. In all this, the Ministry of Labour with Rolando Castro at its head, maintains a sepulchral silence. The current attack on STISSS can only be understood as part of an offensive to hand over public health to private capital.

The union must deepen the call for a national day of action and for international solidarity. A mobilisation against the Ministry of Labour should be organised to force the minister and the government of Nayib Bukele to back off from this offensive.

Therefore, as Marxists of the International Marxist Tendency (IMT) we call on national and international solidarity to stop the reactionary offensive against our working-class comrades.

An attack on the STISSS union is an attack on our democratic conquests achieved through revolutionary struggle.

We demand recognition of the democratically elected leadership by the Ministry of Labour.

We point out that this attack also poses the question of privatisation: a threat to the public health system, and the price of which will be borne by the working people.

Defend public health! Kick out private capital from our resources and public institutions!

Only organised and militant struggle can stop these attacks. We must fight for our conquests, against capital and its treacherous and servile government.

For a free and high-quality public health system for all!

Rolando Castro out of the Ministry of Labour!

Protests can also be made via the following Twitter accounts: