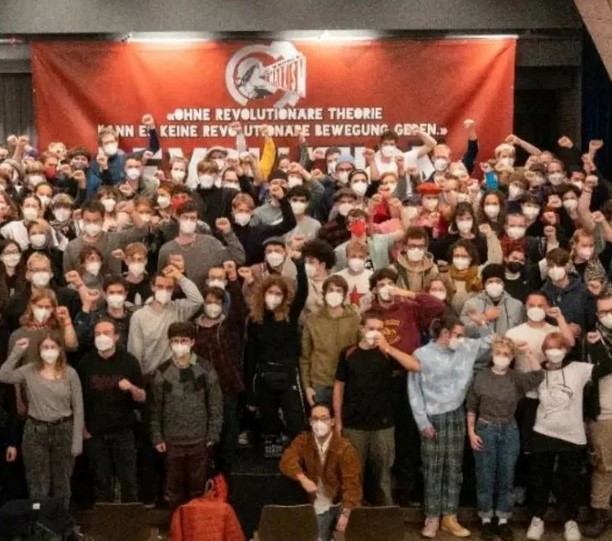 What a huge success! Last weekend, 216 workers, high school and university students took part in the ‘Marxist Autumn School’ in Bern, to educate themselves about Marxist theory, and prepare for the Swiss and world revolution. This was the biggest event ever organised by the Swiss section of the International Marxist Tendency. The forces of Marxism are on the march!

The motto of this year's Autumn School was "Study Marxism, Prepare the World Revolution!" The very first session made it clear that these are not just empty words. In fact, they hit the nail on the head.

The deep crisis of the capitalist system is leading to huge social and political instability worldwide. This is preparing the ground for revolution everywhere. Niklas Albin Svensson, from the editorial office of marxist.com in London, highlighted the fundamental tendencies of the current world situation in the opening session.

He clearly showed how the chaos of inflation, wars and governmental crises (particularly in the likes of Britain and Italy) flows from the economic contradictions of the capitalist system. The ruling class is at an impasse. In order to fight inflation, central bank interest rates were raised, which will inevitably provoke recession. Today, we are seeing economic recessions in one country after another, and yet inflation is still high. This is particularly evident in the example of Great Britain.

This situation means fierce attacks on the lives of the working class masses. "Heat or eat" is a choice forced upon many families this winter.

These developments are having a huge impact on the consciousness of the masses. In a growing number of countries, the working class is entering into struggle. Be it strikes in Great Britain and France, or revolutionary mass movements like in Sri Lanka.

Marxism is the only tool that allows us to understand these developments and to see a way out of the crisis of capitalism. Preparing ourselves for revolution means studying these powerful ideas!

What ideas does the revolution need?

The majority of the participants were attending the Marxist Autumn School for the first time. Many have met Marxists from the IMT in the past months at one of our numerous interventions at demonstrations, universities and high schools. 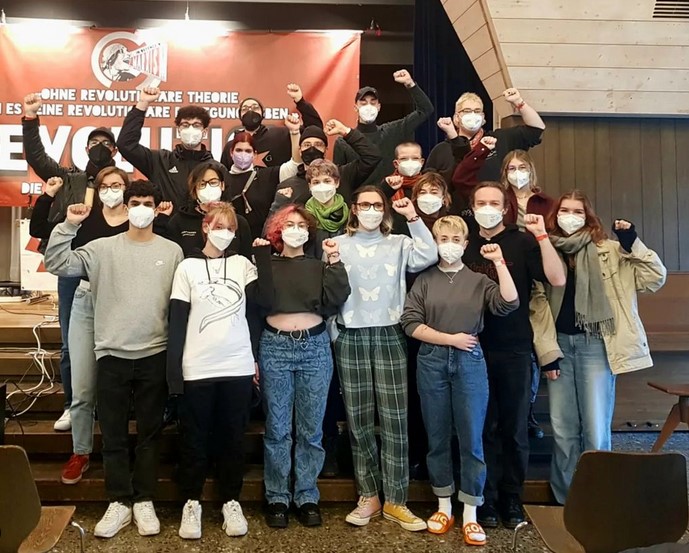 The high number of participants is, on the one hand, an expression of the meticulous building undertaken by the Marxists, as well as the objective world situation / Image: Der Funke

The high number of participants is, on the one hand, an expression of the meticulous and patient building undertaken by the Marxists. On the other hand, it is evidence of the fact that a whole layer is open to revolutionary ideas.

The current situation is pregnant with revolutionary developments. Especially among the youth, a whole generation is radicalising. It is in the process of drawing revolutionary conclusions.

For this reason, this Autumn School served to clarify the fundamental questions arising from this layer. What ideas do we need to overthrow capitalism? Several sessions were devoted to debates against the main ideological currents that, for various reasons, appeal to the youth today.

It is the view of our organisation that these other currents reflect the pressures of bourgeois society. No matter how good the intentions of their representatives may be (and they are not always good), they remain incapable of breaking with the capitalist system. What we need are the ideas of Marxism, which unconditionally take the stance of the working class, and thereby identify the only way out of capitalism: socialist revolution.

To take one example of a dominant idea on campuses, Queer Theory sounds radical because it fundamentally and avowedly rejects the ‘norm’ when it comes to issues of gender and sexuality. However, Yola Kipcak of  Der Funke, the IMT in Austria, compellingly showed in her presentation ‘Marxism vs. Queer Theory’ that, behind the radical phrases, there is little of use in this ideological trend if we really want to overcome gender oppression and move to a society where we can decide for ourselves about our bodies and sexuality.

Queer Theory is based on the completely wrong philosophical method of subjective idealism. It ignores and obscures the real foundations of oppression. Accordingly, it is gratefully embraced by the ruling class to give themselves a progressive veneer and divide the only force that actually has the power to overcome all forms of oppression: the working class.

In another session on ‘Marxism and Women's Liberation,’ Olivia Eschmann from the Swiss section provided an in-depth explanation of where women's oppression comes from, how it is connected to class society, and why we must overthrow capitalism if we are really serious about women's liberation. The discussion was brimming with a substantive fighting spirit. It concluded with thunderous applause and a standing ovation.

Another fundamental question facing the workers' movement for more than a century has been ‘Reform or Revolution?’ Even though an entire generation is radicalising right now, it is very understandable that revolution still seems ‘impossible’ to many. Aren't gradual reforms of capitalism more realistic than a socialist revolution? Based on the theoretical refutation of reformism by the great revolutionary fighter Rosa Luxemburg, Sereina Weber (also of the Swiss section) explained in detail why this is a harmful illusion, and why capitalism cannot be reformed.

On the other hand, it is precisely the betrayal of the reformist leaderships of the workers' movements, which have made themselves comfortable in bourgeois parliament, that meets with completely correct rejection among parts of the radicalised youth. This is precisely what makes anarchism attractive to some layers today, along with Marxism. The session ‘Marxism vs. Anarchism’, therefore, clarified a burning question. Swiss comrade Jannick Hayoz showed that anarchism does not live up to its own revolutionary claims. Ultimately, it limits its whole approach to a mere moralistic rejection of what currently exists, which in practice prevents it from achieving its own goals.

The Saturday evening plenary was devoted to the highly topical question of war and imperialism. In the session ‘Marxism vs Pacifism’, Caspar Oertli showed that war is an inevitable consequence of capitalism. Abstract formulas to reject violence and war are not only inadequate, they flip into their reactionary opposite at crucial moments in history. This is shown by yesterday’s pacifist reformists, who today support Western imperialism and militarism in the Ukraine war. Proletarian internationalism is the only answer to the imperialist wars. Only the overthrow of capitalism can put an end to conflict and bloodshed!

All those who attended throughout the weekend got a good sense of how the Marxist responses to these various important questions are all part of a single unified and coherent worldview. The strength of Marxism comes from the fact that it is based on a systematic philosophical method. Only with a deep understanding of Marxist theory are we able to avoid falling prey to bourgeois pressures. This is the reason why the International Marxist Tendency attaches such central importance to theoretical education.

That is also why introductory sessions on the philosophical and economic foundations of Marxism were included in the agenda. Both were well attended and demonstrated a thirst for Marxist theory.

The breaks were also actively used to process the political points immediately after the sessions, and to discuss them with the many people who came. Even on Saturday evening, after the end of the first day, discussions continued over a drink, and workers' songs were sung.

Revolution in Iran: gigantic inspiration and lessons for revolutionaries!

The entire Marxist Autumn School was marked by an impressive determination. The will to learn the powerful ideas of Marxism was evident in the studious mood. Everyone had their notebooks with them and took detailed notes. This is the spirit of real revolutionaries preparing for the world revolution! 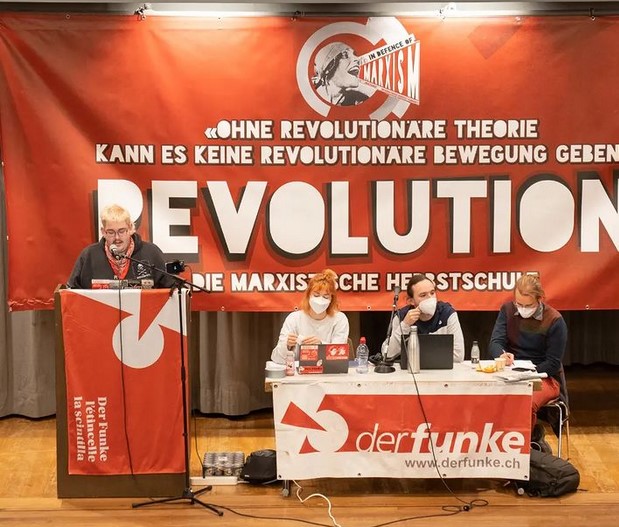 The will to learn was evident throughout the Marxist school / Image: Der Funke

The huge enthusiasm culminated on Sunday in the closing plenary on the revolutionary movement in Iran, and our tasks here in Switzerland.

The movement that broke out after the murder of Jina Amini contained the potential to develop into a revolution. Everyone was impressed by the advanced conclusions that this movement of women, youth and workers has already drawn. This is pure inspiration for all of us. And this is the force on which we Marxists base ourselves: the unity of the working class, which nothing can stop when it organises and gets moving!

The discussion traced the historic thread to understand the character of the reactionary Iranian regime. The pivotal moment was the 1979 Iranian Revolution, and the lessons of that movement are absolutely crucial for today's movement and our tasks worldwide. The heroic masses of the working class can overthrow countless regimes, but if at the crucial moment of taking power there is no leadership to convey a revolutionary program into the movement, that revolution will fail.

In the end, the presentation by Dersu Heri of the Funke editorial board was repeatedly interrupted by bursts of applause. It ended with a long, standing ovation amidst thunderous applause that spilled over into a collective singing of the ‘Internationale’, and finally into loud chants of “Long live international solidarity!" We are all burning with inspiration from the heroic struggle of the masses in Iran.

What is happening in Iran is an expression of the same crisis of capitalism that is gripping the whole world. In every single country, including Switzerland, more and more people are drawing revolutionary conclusions – starting with the youth! It is no coincidence that we of the IMT are the only optimists in a declining society today. The key lies in Marxist theory. We have full confidence in the mighty power of the working class and recognise that the road to socialism is wide open today.

We have entered a period of world revolution – and we must prepare! Never has it been clearer that, in today's times of organic crisis of capitalism, we have nothing more important to do in our lives than to build the forces of Marxism. Socialism in our lifetime! This is what we stand and fight for!

Already, during the event, dozens of participants signalled their desire to get involved with the IMT! The Marxist Autumn School was a milestone for Marxism in Switzerland. It was the most important event for the building of Marxist forces in German-speaking Switzerland this year, and will only be surpassed by the many events in the near future. Marxism is on the rise!

Forward comrades! In the immortal words of the Communist Manifesto:

"The proletarians of this world have nothing to lose but their chains. They have a world to win. Proletarians of all countries, unite!"

On the weekend of 26-27 November, the French-language counterpart of the "Marxist Autumn School" will take place in Geneva: "Ecole marxiste internationale." It is jointly organised by the French-speaking sections of the IMT (Switzerland, France, Belgium, Canada). Register now at www.ecolemarxiste.com!