A decade after the 2010/11 revolution threw out the hated dictator Ben Ali, a wave of anti-government protest has rocked Tunisia. The government has been ousted in a palace coup, but there can be no faith in any bourgeois faction. The masses can trust only in their own strength. A new revolutionary upsurge by workers and youth is necessary to win a real future.

Following days of mass protests against the government in Tunisia, the country’s president Kais Saied stepped in on 25 July. He ousted the government and suspended parliament, invoking emergency powers.

Bringing the army onto the streets, Saied reinforced a ban on public gatherings and a nighttime curfew.

In a live televised address to the nation, Saied announced that he would assume executive authority of the government, and that he would take over the Public Prosecution service.

Saied furthermore warned that "those who insult the head of the state would bear full responsibility before the courts" - a warning to political opponents and anyone who dares to question the legitimacy of his power grab.

To further discourage any resistance, he added: "I warn any who think of resorting to weapons… and whoever shoots a bullet, the armed forces will respond with bullets".

10 years after the overthrow of the hated Ben Ali, this latest political crisis highlights how capitalism has been unable to solve any of the problems that brought the workers and youth onto the streets in the 2010/11 Tunisian revolution.

Watch: Here are the 3 presidential decisions as announced by #Tunisia’s Kais Saied following a day of mass protests against the government and the Islamist Ennahda-led parliament:https://t.co/mPjizWekJo pic.twitter.com/8Q21EGIpIb

The immediate spark for these events is a combination of economic collapse (aggravated by the impact of COVID-19 pandemic in a country that is reliant on tourism) and the government’s mismanagement of the pandemic.

The palace coup did not emerge out of thin air but was the culmination of a drawn out political crisis. The political system has been paralysed by a conflict between President Kais Saied and the government led by Prime Minister Hichem Mechichi and Rached Ghannouchi. The latter lead the biggest party in parliament: the Islamist Ennahda party, which has governed Tunisia almost continually since the 2011 revolution. 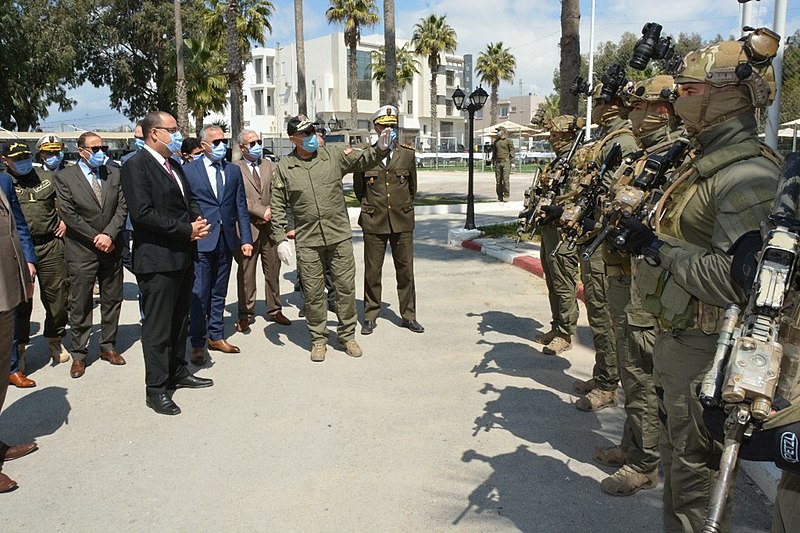 A severe economic crisis, intensified by the COVID-19 pandemic, coupled with disastrous mismanagement by the government, sparked the latest anti-government movement, which the president has demagogically exploited / Image: Ministry of the Interior

Apart from a political deadlock, Tunisia has been suffering from a crippling economic crisis exacerbated by the COVID-19 pandemic. Before the pandemic struck, the country’s economy was already in tatters. According to World Bank figures, average annual economic growth between 2011 and 2019 was a paltry 1.5 percent.

“The economy is stagnant. At 7.5 percent, inflation is at its highest level for nearly 30 years. Unemployment remains at 15 percent overall, though it reaches 30 percent in some of the poorer regions, with youth unemployment at 34 percent. More than a third of the country’s unemployed have university degrees, something that played a key role in the revolutionary uprising in 2011.”

This situation was the result of the deep crisis of Tunisian capitalism. Several bourgeois governments (‘Islamist’ and ‘secular’ alike) have pursued a policy of seeking IMF loans, which came with stringent strings attached: cuts in public spending, privatisation of state owned companies, lifting of subsidies on basic products, and mass lay offs of public sector workers.

These policies further aggravated the economic crisis, making the workers and the poor pay the full brunt of it, as well as deepening the country’s domination by imperialism.

For the last 10 years there have been repeated waves of mass protests by the workers and youth against the dozen weak governments that have succeeded one another. The Tunisian revolution demanded “jobs, bread and freedom”. The overthrow of Ben Ali was a major victory, which the masses had won at the cost of blood. The tyrant was gone, but the capitalist regime remained intact.

Then, the pandemic struck, pushing the economy over the edge. Tunisia’s GDP shrank by 8.6 percent last year, and another 3 percent in the first quarter of this year. Tourism, one of the main sources of foreign exchange, collapsed, as did manufacturing for export.

Already, in January there were mass protests against unemployment, corruption, the government’s mishandling of the pandemic, for jobs, etc. The masses were demanding “the fall of the regime” as they had done in 2010/11.

Then, in June, a lethal third wave of COVID-19 started. The health system, battered by decades of underinvestment and 10 years of counter-reforms and cuts, became overwhelmed, with people dying in corridors and outside hospitals for lack of resources (ICU beds, ventilators, oxygen and PPE).

The health minister admitted that the health system had “collapsed”. The number of people killed by COVID-19 (officially over 18,000) is amongst the highest in the world in proportion to population.

Faced with a disastrous situation and a very low vaccination rate, the government decided to open emergency vaccination centres during the Eid al-Adha festival. Thousands of people queued for hours in the scorching sun and record high temperatures, only to be turned away for lack of vaccines. That was the proverbial straw that broke the camel’s back. Mass anti-government protests were called for 25 July.

Workers and youth enter the scene

Workers and youth came on the streets, spontaneously, across the country. In several cities the headquarters of Ennahda were torched by the crowd.

President Kais Saied, a law professor and aspiring despot who rose to power on an anti-corruption platform, is a skilful demagogue who took advantage of the situation to step in, using emergency powers to suspend parliament and oust the government. There is a lot of discussion in the capitalist media about whether this move was constitutional or not. That is irrelevant. What matters is the real balance of forces.

Clearly, Saied has the support of the army. Tanks were stationed outside parliament. The government had very little public support and the ousted prime minister did not resist, declaring he would willingly hand over power.

Initially, there was some jubilation among the protesters, who cheered at seeing the government they were fighting against removed. The trade union bureaucrats at the head of the UGTT welcomed the Saied’s take over. Some of the Nasserite parties have also expressed support. This is a very dangerous position to take.

The ousted Ennahda capitalist government was rightly hated by the masses, but Saied is also a bourgeois politician who should not be trusted. His election in 2019 was in itself a rejection of the whole establishment of the ‘democratic transition’.

The first round was marked by massive abstention and the defeat of all the ruling parties (both ‘secular’ and ‘Islamist’). Two ‘outsiders’ went on to the second round: the bourgeois demagogue Saied and the wealthy TV magnate Karoui, who behind his facade of ‘independence’ was really the candidate of the old Ben Ali regime.

Saied, a constitutional expert, cultivated his image of ‘loyalty to the martyrs of the revolution’, combining proposals for ‘clever’ constitutional reforms with a reactionary programme on democratic issues (gender equality, decriminalisation of homosexuality, etc).

He represents an attempt by a section of the ruling class to bring “order and stability”, to put an end to the constant political wrangling, the fragmentation of parliament and to rule the country with a “strong and steady hand”… for the benefit of Capital.

It is not yet fully clear what role foreign actors have played in Saied’s coup de main, but we can say with certainty that Turkey and Qatar, which had backed and funded Ennahda, have lost out.

Tunisia’s Labour Party (Parti des Travailleurs the former PCOT) has correctly opposed Saied’s take over in a statement under the headline: “Correcting the path of the revolution will not be done by coups nor by the absolute rule of an individual”.

The statement correctly denounces the ousted Ennahda government “for having caused economic devastation, financial bankruptcy, rampant corruption, terrorism, political assassinations, plunging the country into dependency and debt, and destroying all corners of the lives of Tunisian women and men.”

It then correctly adds: “the desired change cannot come from support for the coup of Kais Saied, nor by allying with the Ennahda movement in any way”.

However, the PT then calls on the masses: “to continue expressing their positions in peaceful ways and to reject calls for confrontation”. It further calls “all democratic and progressive forces, parties, organisations, associations, actors and personalities to hasten to meet around a mechanism for consultation in order to formulate a unified vision”.

For a new revolutionary movement!

10 years ago, as the Tunisian masses of workers and youth overthrew the hated Ben Ali, we wrote:

"If the revolution is to be taken to its logical conclusions, and the demands for work and dignity are to be fulfilled, the wealthy of the Tunisian capitalist class, the banks, industries and companies which supported, backed, financed and benefited from the dictatorship, must be expropriated. Only in this way, can the wealth of the country created by working people be put under the control of this same working people in order to fulfil the needs of the population. The aspirations of the Tunisian masses can only be genuinely satisfied through a social, as well as a political revolution: a socialist revolution." (‘Tunisia: reject the farce of national unity – continue the revolution until victory’, 18 January 2011)

Therein lies the tragedy of the Tunisian Revolution. The dictator was overthrown, but the capitalist regime under imperialist domination that he represented remained in place. As a result, the situation of the masses has not fundamentally changed.

Tunisia had been presented as a model of a "democratic transition", completed with a Constituent Assembly and a new Constitution. The country was “a rare example of success”, so the bourgeois commentators told us, as it was the only one not to have descended into civil war or reverted to dictatorship after the Arab Spring.

But the youth remain unemployed, forced to take the dangerous path of migration in search of a future. There is no future and no dignity for the working masses under capitalism. These are precisely the conditions that led to the revolutionary uprising in 2010/11. Now the situation has been made worse by the impact of the COVID-19 pandemic and the criminal way in which the government has dealt with vaccinations.

A new revolution is needed, one that brushes aside the whole edifice of the capitalist regime and puts the workers firmly in charge. Tunisia had its February Revolution. It still requires an October Revolution, and for that, a Bolshevik Party needs to be built.

The Tunisian workers and youth should trust no bourgeois politicians. “Correcting the course of the revolution” requires a new revolutionary uprising, one that puts the working class in power and starts the socialist transformation of society: expropriating the capitalists and multinationals, putting the remnants of the old regime on trial, repudiating the debt, and using the country’s resources for the benefit of the majority under a democratic plan of production.

Such a revolution would have a powerful attraction for the masses in the whole of the Maghreb, who 10 years after the Arab Spring are still yearning for jobs, bread and justice.

The most urgent task for the advanced layers amongst the Tunisian workers and revolutionary youth, who have shown extraordinary elan, heroism and resilience for over a decade, is the building of a Marxist tendency, armed with a clear revolutionary socialist programme that can take our class to victory.