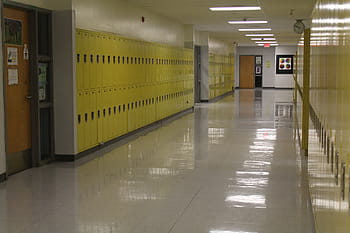 NYC Mayor Bill De Blasio’s treatment of the NYC Public Schools is an indictment of capitalism’s prioritization of profits over the wellbeing and safety of its youth and workers.

On Friday, March 13, the last day before the country’s most extensive school system was finally closed, attendance in my classroom had plummeted. Hardly anyone could focus on the regular classwork as anxiety over the virus was at the forefront of everyone’s mind. I decided to ask my eighth-graders to prepare an argument about whether or not we should shut down the schools.

While most of them pointed out that they needed to close the schools to prevent the spread of the virus, they expressed how closing the schools would impact the most vulnerable members of the school system. They expressed concerns over the children who would not be able to eat or have anywhere to go. They were not opposed to closing the school system—but were clearly opposed to the type of society in which we live—one that fails to meet basic human needs.

On March 5, after the first case of COVID-19 was confirmed in NYC, a letter was sent to all students to reassure them that, “while we all hoped this moment would not come, it was something the City has meticulously prepared for.” Nearly three weeks later, we have yet to see these “meticulous” plans come to fruition. Until the NY State changed its policy on March 22, the city urged families to continue business as usual, explicitly noting that they did not need to avoid public transportation or crowds. 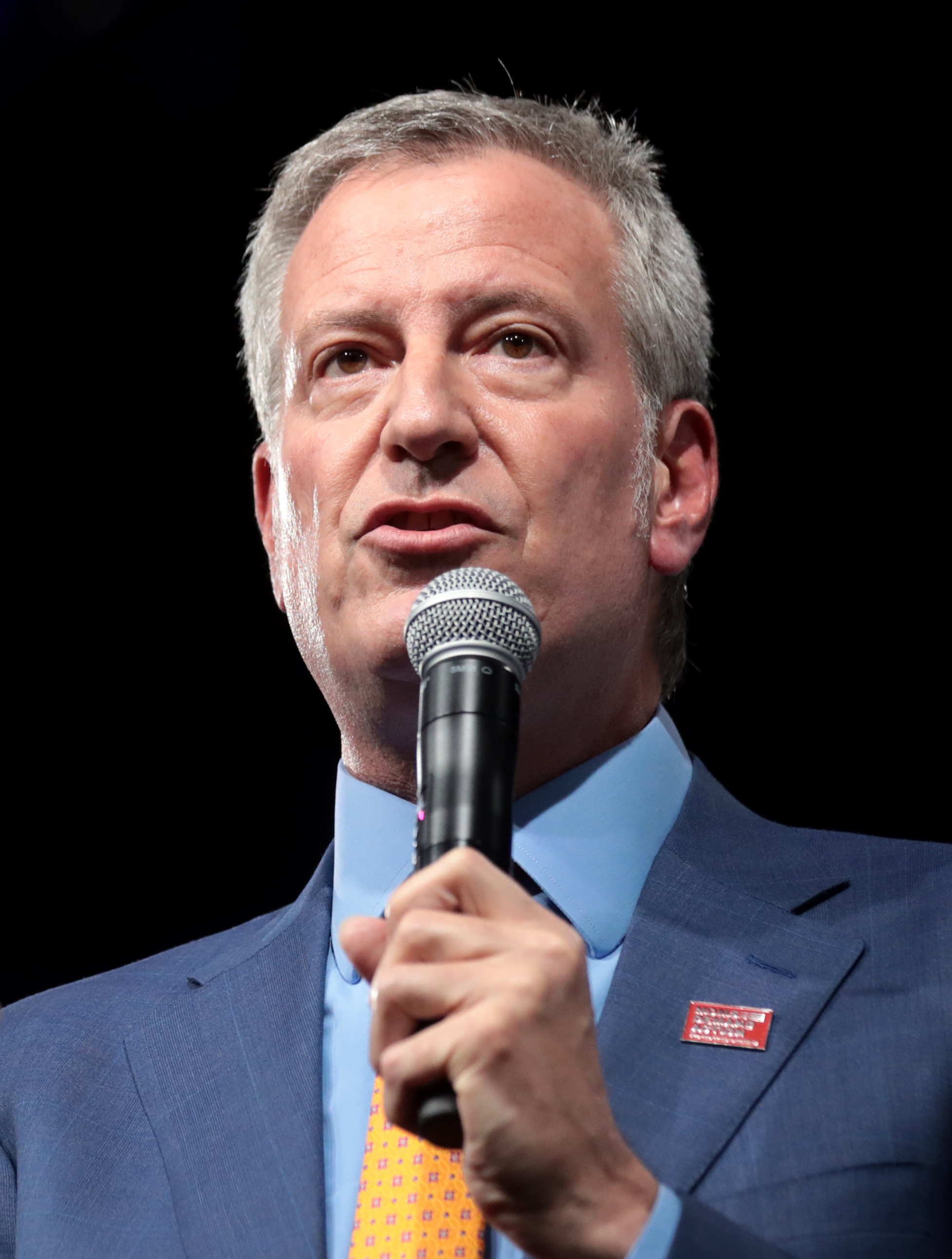 This begs the question, why was de Blasio so reticent to close the schools? Was it, as he said because he was worried about the children who rely on the school system for food and shelter? After all, keeping the schools open meant bringing together some infected people with others not yet infected. At the same time, not one level of government—federal, state, or city—was testing students, teachers, or other school employees.

The reason de Blasio was so intent on keeping the schools open was not out of concern for the students who rely on the school system for shelter and food—but to facilitate the needs of the employers. In a study released by the Brookings Institution, they estimated that a four-week school closure in New York City alone would cost $1.1 billion to businesses. Although schools do not produce commodities in the same way a factory does, we educate the children of the working class. Not only do we educate the workers of the future, but we allow the parents of those children to sell their labor power for a wage.

In New York City alone, the public school system serves 1.1 million children. This means that during any closure, hundreds of thousands of households must either stay at home to look after their children or find alternative childcare. This would mean a massive increase in absenteeism at workplaces large and small.

In normal times, de Blasio would have been able to justify the burden placed on families when the schools closed—but these are not normal times. The millions of workers who now have to stay home with their children or scramble to find childcare need sick and other forms of leave at full pay. This should be a top demand of the labor leaders and the NYC Central Labor Council, which represents 1.1 million organized workers.

Across the country and around the world, we have seen wildcat strikes from workers demanding that their lives and the lives of those they serve must come before profits. For example, autoworkers in Michigan successfully shutdown the “Big Three” (Ford, GM, and Chrysler) in a wildcat strike after their union leadership failed to act on their behalf to guarantee protections.

The ruling class is afraid that workers around the world will follow suit and refuse to shoulder the burden for the ongoing economic and public health crisis. At a time when the stock market has already fallen 35% globally since the beginning of the present crisis, the organized working class could bring the entire economy to a halt and clearly pose the question: who really runs society?

De Blasio’s crocodile tears over the children who would have nowhere to go or nothing to eat if the schools were closed is a cynical ploy to give “progressive” cover to a reactionary policy. This is the same rhetoric used by the ruling class to demonize the teachers who went on strike for higher wages in 2018. If we look at de Blasio’s track record, we can see that he has done virtually nothing for the most vulnerable children he claims to worry about. This is the same mayor who oversaw adding dividers to the subway benches to prevent homeless people from sleeping on them.

As of November 2019, 114,000 children in New York City were homeless, an increase of 70% over the past decade. Homelessness in NYC is on the rise, not because of a lack of living space, but because of the rich landlords’ vulturous pursuit of profits. In 2018, it was estimated that as many as 250,000 luxury rentals were unoccupied. Solving the homeless crisis in NYC could be done swiftly and efficiently, but it is not in the interests of the ruling class to do so because this would cut into property values. Despite his “progressive” image, Mayor de Blasio is just another big-business politician who works within the rules of the capitalist system—rules that perpetuate a vast amount of suffering every single day, including in the wealthiest city on earth.

Workers shut down the school system

When the schools finally closed on March 16, it was not due to the benevolence of the mayor, but due to the militancy of rank-and-file teachers. Despite the call by the United Federation of Teachers (UFT) leadership, which urged Mayor de Blasio to shut down the school system, these same leaders deliberately shied away from militant action. Their bold plan of action to “harness the power of this union’s membership” was to call City Hall, Tweet at the mayor, comment on his latest coronavirus post on Facebook, and share posts about the need to close the schools.

This is when the UFT’s opposition caucus, the Movement of Rank and File Educators (MORE UFT), put out a call for a sickout. Predictably, the union leadership urged us to avoid a sickout because it violated the Taylor Law, which makes it illegal for New York public employees to go on strike or conduct job actions. The union leadership played a pernicious role in holding the teachers back, placing the letter of this reactionary law above the safety of the teachers and the children. Defying the union tops, an estimated 60–70% of union members called out sick. An hour later, de Blasio announced that the schools were closed. This shows the power of the workers—law or no law! 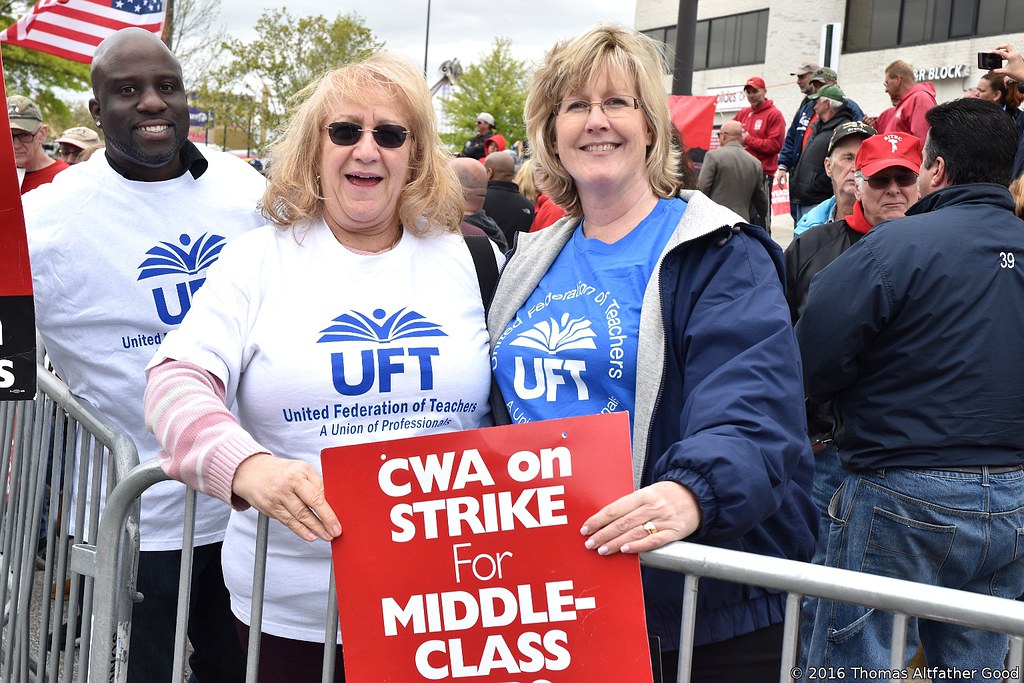 UFT members picketing in support of CWA and IBEW strikers on May 5, 2016 in Staten Island / Image: Thomas Altfather Good, Flickr

The MORE UFT caucus put forward a series of demands, including the provision of temporary public shelters; make food available to those who depend on public-school meals; freeze rents and extend the moratorium on evictions; provide free internet for all students; make COVID-19 testing free and available to all, and streamline emergency unemployment for workers who are laid off. These demands again demonstrate how interlinked the school system is with the functioning of the capitalist system as a whole.

The call for a sickout would have been even stronger had they linked up with other sections of the workforce to demand immediate sick leave for all with no loss in pay. This would have brought the city to a halt in a heartbeat. While the direct intervention of the teachers did close the schools, some 80,000 workers in the school system still had to go into work on Tuesday, Wednesday, and Thursday to plan for remote learning. It’s hard not to feel as though this is our punishment for being willing to defy the Taylor Law and take our lives and safety into our own hands.

Despite de Blasio’s willingness to put the lives of teachers and children at risk for the maintenance of profits, he and the schools’ Chancellor, Richard Carranza, had the gall to claim that this would be our finest hour as a city and a school system. They vowed that no child would go hungry during these times and that every child would have the resources to participate in remote learning. Despite these bold claims, thousands of students will not, in fact, have the necessary technology to participate in remote learning.

The Chancellor then backtracked and asserted that they would not actually have 300,000 devices by Monday, March 23—and that they never made such a promise. This means that thousands of children have been left in the lurch, expected to participate in remote learning without the means to do so. Even by their own standards, this is far from their “finest” hour. On the contrary, de Blasio and co. will have blood on their hands for their failure to act swiftly and decisively—which helped turn NYC into the country’s COVID-19 epicenter.

What needs to be done?

When I was discussing whether or not we should shut down the school system, I asked the students what they think needs to be done to solve the healthcare crisis. They said that we need to test people widely at no cost because refusing to test people does not make the virus go away. They said that we need guaranteed housing for everyone, and we need to have plans in place to provide childcare for essential workers. The plan my students came up with is far more humane and robust than anything the ruling class can muster—because to solve this crisis requires a decisive break with capitalism, which will always put profits above human lives.

COVID-19 has exposed capitalism’s indifference to human lives. The illusions millions of people have in capitalism and status quo politics are coming apart at the seams. The world doesn’t have to be like this. We can have a society based on human need and toss the irrational and barbaric system of capital into the dustbin of history where it belongs. The US section of the IMT has put together a socialist program to fight COVID-19 and the economic crisis. If you agree with us, we urge you to join us!