Share
Tweet
Yesterday a communique reached the Campus Antiwar Network national discussion e-mail list announcing the occupation of the New School University's cafeteria by students both from the New School, as well as from other universities in the surrounding area from New York and New Jersey. The students have occupied the cafeteria, claiming it as an autonomous students center.

At 9:49 pm, on Wednesday, December 17, a communique reached the Campus Antiwar Network national discussion e-mail list announcing the occupation of the New School University's cafeteria by students both from the New School, as well as from other universities in the surrounding area from New York and New Jersey. The students have occupied the cafeteria, claiming it as an autonomous students center, demanding that the university immediately reveal any and all investments in companies with military contracts and the immediate divestment from the same. The students have now been occupying their building for more than 10 hours at the time this report is being written. 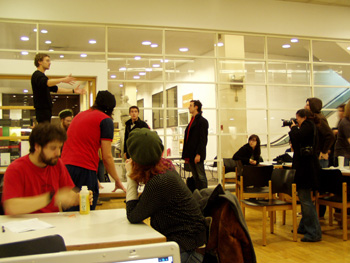 On the night of the occupation, students erected barricades inside the new autonomous students' center, but kept an open door policy toward other students who want to come and participate in the occupation. A second communique from the morning following the occupation revealed that the initial act was carried out by only 75 students, but that support and fresh occupiers have come in through the night.

It is telling that the second communique came, not from a New School student, but a student at City University of New York (CUNY) involved in the occupation. The letter stated that, “Students from several Universities commandeered this space. Students of City College, Borough of Manhattan Community College, Hunter College and the CUNY Graduate Center are here participating in this struggle. This is every student's occupation.”

This is precisely the type of development that we can and must welcome. All youth and students face the same struggles and must wage the same fight. We have to coordinate our demonstrations and begin to move in a more militant direction, as these students have shown in New York.

Another aspect of the latest message from the occupying students which is quite heartening is the fact that they have linked their struggle to the overall economic conditions of the working class, the class which most students are or will be a part of themselves. The second letter states:

“... We certainly have reason to be upset:  On the first day of the Fall 2008 semester, the CUNY budget was slashed $50.6 million.  Massive layoffs plague all our schools. We are now being told of a looming $600-per-year tuition hike and more colossal budget cuts to CUNY students and teachers, in a school that was once FREE.

We will continue this campus occupation until our demands are met. While the demands tonight are specific to The New School we will not be satisfied until the students and faculty of CUNY, NYU, all the consortium schools and beyond, have control over their universities. Education should be free, student debts should be canceled, students and workers should work together to achieve our goals, and we start here.” 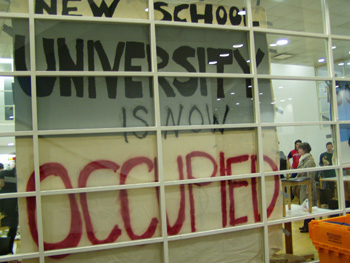 These demands are already quite telling, that those involved in the struggle at the New School have fleshed out a thorough and militant program, which includes the extremely important cancellation of student debt and students' and workers' control over the universities. The ideas and methods in Europe and those of the workers in Chicago have not been stopped by distance and they cannot be stopped by anything or anyone. The American students are making their mark and will continue to do so.

Additional demands include the resignation of President Bob Kerrey, Executive Vice President James Murtha, and Board Member Robert B. Millard from the New School. A full list of demands can be found below.

“We are here, making decisions collectively, doing teach-ins, listening to music, studying, singing. We've got an upright bassist, guitarists and vocalists (If anyone can volunteer a drum-set we'll be well on our way...). We'll be here until this university changes... We're not going anywhere. We hope to see you soon, and if you really can't wait a few hours [to join us] – what the hell – occupy your own universities or work spaces.”

Today, December 18, there will be a rally and press conference scheduled at the Autonomous Students' Center at 10:30 am. We encourage all students and workers who are able to make it to go and show support for these students, and to join them in their occupation. The center will be open every day from 7:30 am to the public, and you can arrange to stay with the students in the occupation from there.

The movement has taken on the name The New School in Exile. You can view their website here.


The students have been joined in solidarity by UNITE HERE Local 101, who represent the cafeteria workers, and they have refused to cross the barricades. Our job now is to get messages of solidarity from our unions, student councils, and political organizations.

Messages of solidarity can be sent to:

The New School in Exile

with a copy to:

The Demands of the Occupation:

• The removal of Bob Kerrey as president of our university

• The removal of James Murtha as executive vice president

• Students, faculty, and staff elect the president, EVP, and Provost.

• Students are part of the interim committee to hire a provost.

• The removal of Robert B. Millard as treasurer of the board of trustees.

• Intelligible transparency and disclosure of the university

• The creation of a committee on socially responsible investments.

• Instead, money towards the creation of an autonomous student space.

• Instead, money towards scholarships and reducing tuition.

• Instead, money for the library and student life generally.