The small "Ernesto Che Guevara" hall at the book fair, decorated with paintings and photos of the Argentinean revolutionary, was packed to full capacity with more than 100 people when the meeting kicked off at 6pm. There were even people standing in the aisles and the entrance in order to be able to follow the presentation on this important book. This is an indication of the interest in Marxist ideas particularly as most authors at the book fair are saying that other book launch meetings get very small audiences. 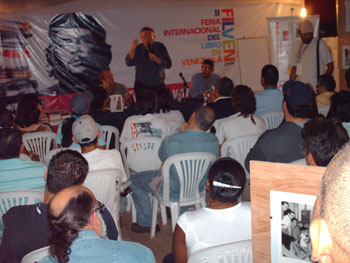 Opening the meeting, Dannybal Reyes Umbria, of the publishing house El perro y la rana, which has published the book in Venezuela, introduced the author as a Marxist with considerable experience in the class struggle internationally and who has long been a participant in revolutionary movements in countries like Britain, Spain, Pakistan and Venezuela.

The next speaker to give a brief introduction was Carlos Rodriguez of the Fundación Federico Engels (FFE). Carlos explained the importance of the debate in the Bolivarian movement about the revolution and the perspectives that lie ahead. He also emphasised that the FFE is not only a Marxist publishing house, but that it is linked to an organization, the Revolutionary Marxist Tendency (CMR), which strives to organize the most advanced workers and youth in order to deepen the revolution and push it in the direction of socialism.

After these short introductions Alan himself started his speech. His starting point was the terrible fact that each year thousands of people die in Latin America because they do not have food. This in a continent which is so extremely rich in natural resources, copper, silver, iron, food reserves, and so on. Alan stressed that this is not something that should be taken for granted.

The Venezuelan revolution itself is proof of this. Alan explained how Trotsky defined a revolution fundamentally as a process in which ordinary men and women begin to take their destiny into their own hands. This is exactly what is happening now in Venezuela, in a situation where the masses have mobilised and moved time and again.

Alan countered the arguments of the reformists, who believe that the revolution cannot go further because of the supposedly "low" level of consciousness of the masses. Alan stressed that the last 7 years in Venezuela prove precisely that the masses, on several occasions, have demonstrated that they are the real force behind the Bolivarian revolution. 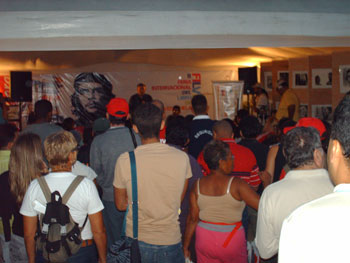 The main problem is that the revolution faces two dangers: on the one hand the old state apparatus is still in place. Alan described the bureaucracy as a cancer on the living soul of the revolution. He stressed that it can only be effectively countered with the four conditions for a workers' state that Lenin explained in his book, The State and Revolution. First and foremost it is necessary that the officials of the state are elected by democratic assemblies in the factories and neighbourhoods and are subject to the right to recall. And these officials should not receive a wage higher than that of a skilled worker. A popular militia should be established to replace the standing army and finally, gradually, as the productive forces increase, and the living standards and cultural level of the population raised, all the tasks of administration of the state should be performed by everybody in turn.

Against the ideas of reformism, Alan gave the example of the bourgeois revolution in the USA; George Washington's declaration of war on the British Empire was a very revolutionary act. In fact Washington, and later Abraham Lincoln in the Civil War, went on to confiscate all the main property and land of the British loyalists. They did not give them a penny in compensation for this.

This attitude ought to be taken up by the government of Hugo Chavez. Alan, who has met with Chavez himself, made the point that Chavez is a very honest revolutionary fighter, but that he made a mistake in April 2002 by not completing the revolution. At that moment all the basic conditions were present, but the lack of clear political leadership prevented the movement from taking the next logical step - the destruction of the power of the oligarchy. 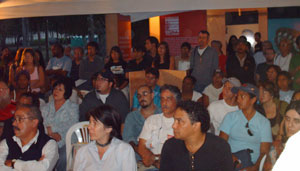 It is necessary to get Chavez re-elected on December 3, but we must complete the revolution - that is we must take the revolution towards socialism. For that purpose we must construct a Marxist tendency within the Bolivarian movement.

Alan ended his speech with a passionate appeal to the audience. If we are truly Bolivarians, we must work in the spirit of Bolivar and not the spirit of reformism. If Bolivar had had the same pessimistic attitude as the reformists have today, always saying that "it is not the right time for socialism", he would never had been able to defeat the Spanish empire.

Alan said that Bolivar had one extremely relevant idea - the idea of a unified Latin America in harmonious development. Alan supported this idea one hundred per cent, but said that he has one little amendment. The nearly 200 years since the death of Bolivar has shown that the bourgeoisie is incapable of accomplishing this goal. Therefore it must be the working class and its natural allies, the revolutionary youth, the small peasants and the urban poor that do this. This is the essence of the socialist revolution.

The speech was met with a thundering applause and afterwards there was a short time for questions. Many different subjects were covered from the situation in Mexico and Oaxaca, to Mercosur, the situation in the UNT, etc.

Afterwards there were a number of journalists that interviewed Alan for television, radio and some newspapers and also many people who came to the stall of the Fundación Federico Engels to buy copies of the book and get them signed by the author.