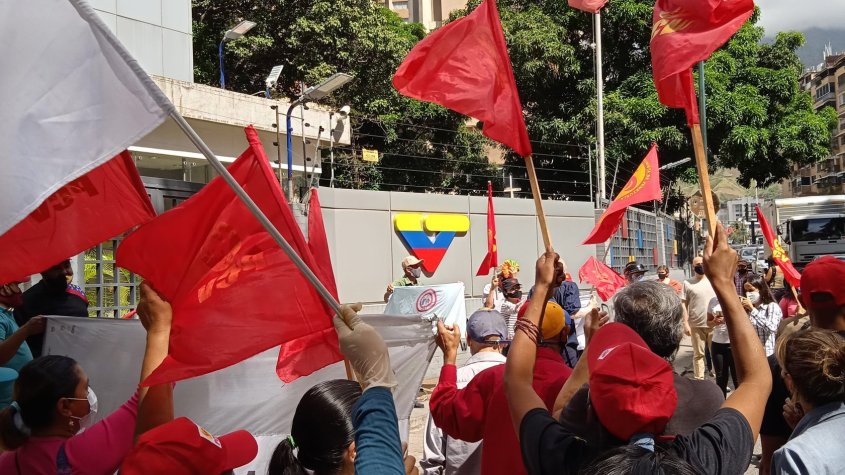 On the morning of Thursday, 19 November, organisations that make up the People’s Revolutionary Alternative (APR) protested in repudiation of the media censorship of this left-wing coalition, carried out by public and private media during the electoral campaigns for the parliamentary elections on 6 December. This demonstration took place in front of the Venezuelan Television Corporation (VTV), and was attended by numerous candidates and leading figures of the alliance.

With the waving of flags of the different organisations of the APR, along with chants and speeches by the candidates, the protest took place under the slogan: "Against the media siege of the APR." The protesters expressed that with the invisibility to which the electoral proposal represented by the APR is subjected, articles 57 and 58 of the Constitution of the Bolivarian Republic of Venezuela are violated, which enshrine freedom of expression, the right to timely and truthful information, and prohibit censorship.

Also, the protesters alleged that with the media siege of the APR, the public and private media violate articles 72 and 81 of the Organic Law on Electoral Processes, of which the National Electoral Council (CNE) must ensure compliance.

In the various speeches made at the doors of VTV, denouncements were made of how the state channel frequently grants spaces in its programming to candidates and leaders of the different right-wing groups that will be running on 6 December, without giving any opportunity to the APR candidates to present their assessments and proposals to their electorate. The former could be proved when the channel doors remained closed to the protesters for the whole time, and were only opened at the moment when candidates from the reactionary COPEI (Social Christian Party) camp were preparing to join the channel.

With the waving of flags of the different organisations of the APR, along with chants and speeches by the candidates, the protest took place under the slogan: "Against the media siege of the APR" / Image: fair use

Paola Vásquez, a member of Lucha de Clases (the Venezuelan section of the IMT), and national candidate for the APR/PCV, rejected the media blockade of the APR. At the same time, she denounced the jail sentences of workers and peasants imprisoned for class struggle activities, while "characters harmful to national politics" remain free, with their crimes unpunished.

The demonstration concluded with the delivery of a protest letter to the channel, signed by representatives of the main organisations which make up the APR. Copies were made that will be delivered to: the various national public and private media outlets, the Ministry of People’s Power for Communication and Information (MPPCI), and the National Telecommunications Commission (CONATEL).

Below, we reproduce the open letter to the MPPCI, to CONATEL, and the media outlets with national distribution, given the censorship imposed upon the APR candidates:

Ministry of People’s Power for Communication and Information (MPPCI);

We offer a respectful greeting from the People’s Revolutionary Alternative (APR), a political bloc which binds together numerous revolutionary social and political organisations of the working class, peasantry, communards, with all of the professional and cultural diversity of the Venezuelan people’s movement, which are expressed on the slate of the Communist Party of Venezuela (PCV).

We hereby wish to formally denounce the premeditated censorship of the candidates of our electoral nomination, in the spaces allocated by the Ministry of People’s Power for Communication and Information, for the dissemination of information of the electoral campaign of the parliamentary elections of 6 December, 2020.

This is a public and notorious fact, which has been questioned by well known political figures and personalities, among them journalists and academics, from whom you would have probably already heard, given that the premeditated censorship against the APR-PCV is a topic which has been brought to the national political arena.

We wish to express our rejection of this situation that violates articles 57 and 58 of the Constitution of the Bolivarian Republic of Venezuela, as well as articles 72 and 81 of the Organic Law of Electoral Processes, of which the National Electoral Council (CNE) must ensure its compliance.

The time allocated to the APR-PCV in the state media simply does not exist. The Communist Party of Venezuela (PCV) and the other national organisations which make up the APR (Corriente Uzcátegui, Corriente Pinto, Izquierda Unida, Lucha de Clases, Partido Revolucionario del Trabajo, MBR-200, Red Autónoma de Comuneros, Somos Lina, Movimiento Viviendo Venezolano, Voces Antiimperialistas, Encuentro de Luchas Populares, Asociación de Conserjes de Venezuela), along with hundreds of regional and grassroots organisations of various stripes, have already experienced this censorship during the times of the Puntofijo Pact, when the bipartisan adeco-copeyano (alliance of Democratic Action and COPEI parties) domination did not concede greater spaces to leftist and revolutionary organisations to express themselves in the public media, in order to publicise their electoral options.

We believed that this stage had been left behind with the election of Comandante Hugo Chávez as President of the Bolivarian Republic of Venezuela in 1998, as well as the beginning of a process of democratisation and national liberation. We regret to observe that today, this conquest of freedom of expression, and putting the state media at the service of the people, are both seriously threatened by the political, institutional, and bureaucratic decisions of the upper echelons of government.

In this sense, we have decided to mobilise, to assert our constitutional and political rights, and to deliver this document right here, at the VTV facilities, which defines itself as the channel of all Venezuelans.

We demand the lifting of the media blockade of the People’s Revolutionary Alternative, which is expressed in the electoral slate of the Communist Party of Venezuela, in the public media system, and in the private media. We demand that spaces be granted, under conditions equal to all other electoral parties which did not participate in the negotiations and did not sign the agreement at the dialogue table [with the right wing opposition]. We demand that our candidates be invited to the public debates that are being broadcast by said media, in these few days that still remain of the electoral campaign, in which our only option has been invisibility.