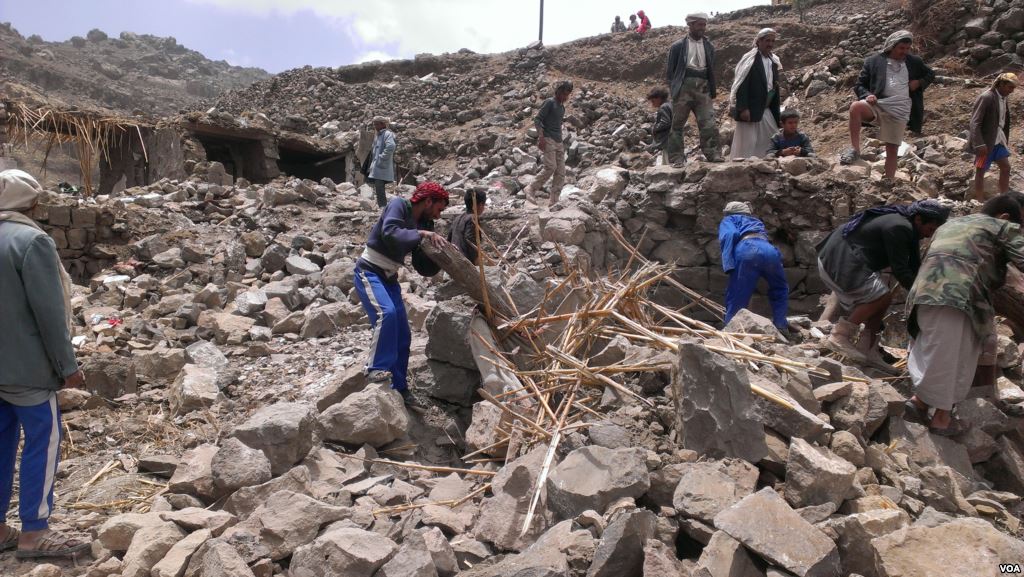 As western media overflows with damning images of the atrocities carried out in Syria's Aleppo, the humanitarian disaster in Yemen is being more or less quietly brushed under the carpet. The reason? The west is elbow deep in the Yemeni tragedy.

Up to 200 were killed and more than 500 injured after coalition airstrikes targeted a funeral in the Yemeni capital of Sana'a. The funeral, which was being held for the father of a prominent Houthi leader, was attended by a series of top security officials, but also hundreds of civilians. According to the Red Cross the venue was attacked by up to three airstrikes leaving what some witnesses called "a lake of blood." The relief organisation said it had prepared 300 body-bags.

The Saudi-led coalition initially denied having carried out the bombings, although it is hard to imagine other air-forces having flown over the area. In any case, the Saudi excuse was exposed by a rare attack by the the kingdom's US allies. A statement by a National Security Council spokesman, Ned Price said that the United States would conduct “an immediate review” of its support for the Saudi-led coalition, with possible adjustments “to better align with U.S. principles, values and interests."

But however horrifying the latest atrocity is, it is a not a major departure from what Yemenis have been suffering at the hands of the Saudis. Western media have been shedding rivers of crocodile tears over Aleppo, while at the same time failing to mention the siege imposed on millions of Yemenis who happen to live in Houthi controlled areas. The brutal siege is exacerbated by the fact that even before the one sided war, Yemen was one of the poorest, driest and most underdeveloped countries in the world, where more than 40 percent of the population lived in poverty and regular fresh running water was a luxury.

The Saudi-led campaign hit the civilian infrastructure very hard. All major roads, ports and other key infrastructure have been severely damaged, making transport of basic commodities extremely difficult. In fact, a third of all airstrikes have been on non-military sites such as school buildings, hospitals, mosques and marketplaces. One marketplace in Sirwah in the Marib governorate has been hit 24 times. In September 2015, 135 people died in the bombing of a wedding in Taiz, more than 100 died in April this year in a market bombing in the Hajja governorate while 30 were killed in a market-bomb in Hayfan during a supposed ceasefire. In the governorate of Saada where Houthi's enjoy much popular support, incidents involving non-military sites outnumber hits on military targets three to one. Furthermore a series of hospitals and relief facilities, including those of Médecins Sans Frontières, have been bombed on a regular basis.

On top of the military onslaught, the coalition has imposed severe economic sanctions as well as a full scale blockade of the Houthi controlled areas where the majority of the population lives. A sea blockade of rebel-held areas enforced by the coalition stops shipments reaching most ports. Most port facilities have also been completely destroyed, making docking and unloading impossible - except for in Saudi controlled areas.

The war has left millions in a desperate situation. According to the UN, more than half of the 28 million population face food scarcity. Children are the worst hit, with hundreds of thousands at risk of starvation. 370,000 children are suffering severe malnutrition and 1.5 million children are going hungry.

"The scale of suffering as a result of the ongoing conflict in Yemen is shocking. An estimated 21.2 million people, which constitutes nearly 80% of the total population, need humanitarian assistance. Almost half of those in need are children," said UNICEF Yemen Representative Meritxell Relano. UN Humanitarian Coordinator in Yemen, Jamie McGoldrick told CNN that, "It's probably one of the biggest crises in the world but it's like a silent crisis, a silent situation and a forgotten war."

Pressured by rising public opinion against the war, the American and British ruling classes are now displaying “unease” with the atrocities of the Saudi war. However, this change of tone reeks of hypocrisy. US imperialism - along with its British puppies -  have been supplying huge amounts of arms to Saudi Arabia and the Gulf States. Last year alone the US sold $33 billion worth of arms to the Gulf States. According to the Guardian, the Obama administration “has offered to sell $115 billion worth of weapons to Saudi Arabia over its eight years in office, more than any previous U.S. administration.”

But it does not stop here. The US navy actively participates in enforcing the sea blockade on Yemen and US imposed banking sanctions are key in the hindering of trade, in particular of basic goods which are desperately needed by the population.

The US armed forces also participate in the logistics of the war along with providing refueling facilities. According to Military Times, the US Air Force flew 1,144 aerial refueling sorties totaling 9,793 flying hours and providing 40,535,200 pounds of fuel to 5,525 receiving aircraft over Yemen up to August of this year. Aerial refueling only has one purpose, to sustain an intensive air campaign without jets having to “waste time” refueling in an airport. US refueling support for the Saudi campaign has increased by 61 percent since February.

Furthermore US and British officers have been present in the Saudi command and control centres from day one of the war, helping to choose targets for the Saudi bombing campaign.

The United States and Britain are involved in every aspect of this war except for the pulling of the trigger itself. All for the sake of appeasing the rotten Saudi ruling clique which is engulfed in an existential crisis. Speaking to the CNN, Peter Salisbury from Chatham House gave a very precise explanation of the matters at stake:

"The Yemen war remains regional because there is no major international backer on the other side of the conflict. And the Americans and the UK don't have any real strategic interest in Yemen, which is why they have decided to back the Saudis. For them, the strategic imperative in Yemen is really to keep the Saudis happy and to maintain a degree of stability in the Gulf.

"Basically, policymakers in the West see the world as a giant game of Risk, and they see more value to maintaining their relationship with Saudi Arabia than getting rid of bad PR over Yemen."

When a journalist asked US spokesperson John Kirby about the difference between the Saudi bombing of Yemen and the Russian bombing of Aleppo, Kirby replied that there was a “pressing requirement for self-defense” from the Saudis. Asked to elaborate he tied himself up in knots. It is worth quoting at length (see video here):

QUESTION: All right […] But you pointed to the fact that the Saudis are doing this in self-defense. Is that the – not this one –

QUESTION: -- the specific thing, but the whole – in its entirety.

MR KIRBY: I get this. I’m not trying to make too much of a historical analogy here.

The answer stands out clearly: there is no particular reason for US support of the murdering of tens of thousands of innocent Yemenis. The war in Yemen was started as a desperate attempt by King Salman and his son Mohammad Bin Salman to appease the wahhabi clique in the kingdom and to defend the ruling clique’s fading international importance. It is no secret that the US has never agreed with this war, but this only highlights its cynicism.

The fact is that this war is unwinnable. The Houthis rose to power on the basis of a mass movement while the “officially recognised” Hadi government has very little domestic support. In fact, his allies, mainly groups of southern separatists and various islamist groups, have always underlined the temporary nature of their alliance. The funeral bombing, coming on top of one and half years of devastating one sided bombing, will only serve to increase the hatred for Saudi aligned forces and increase support for the Houthi forces, particularly in the north. Sooner or later the haemorrhaging of money and prestige will result in a retreat by the Saudis which in turn will accelerate the disintegration of this reactionary regime and hasten its downfall.